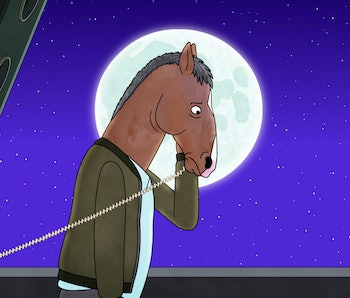 This article about Season 6, Part 2 of the animated series BoJack Horseman was originally published on October 29, 2019 and updated on June 8, 2021 following the release of the season on Netflix. Read on for the original article, with some new changes to reflect the latest updates on this topic.

Everyone’s favorite sad horse rose into the sunset with a two-part final season of Bojack Horseman on Netflix. Part 1 started strong but flailed near the end of its eight-episode run before closing on a tantalizing cliffhanger. BoJack Season 6 Part 2 brought the story to an end by resurrecting some of the worst skeletons in ole’ BoJack’s walk-in closet.

Here’s everything we know about BoJack Season 6 Part 2, from the release date and trailer to plot details and why Bojack Horseman ended anyway.

What was the release date for BoJack Season 6 Part 2?

The final episodes of BoJack hit Netflix on January 31, 2020.

How many episodes were there in BoJack Season 6 Part 2?

We got eight more episodes in part 2. That means Season 6 ran 16 episodes in total, which is pretty long for a Netflix series.

Was there a trailer for BoJack Season 6 Part 2?

Yes! The trailer arrived from Netflix in early January 2020, a few weeks before the season premiered.

Part 1 ended with a pair of reporters digging up clues about some of the worst moments in BoJack’s sordid past, including the time he kissed his childhood friend’s daughter and the death of his old Horsin’ Around co-star Sarah Lynn. Part 2 had those chickens coming home to roost as his demons come back to haunt him, leaving him wrecked both career-wise and emotionally.

But BoJack Horseman has billed itself as an ensemble series, which means final journeys for the other characters. Princess Carolyn continues to search for a balance between work and personal, as she gets a golden opportunity served to her. Diane finds surprising success as a young adult writer, though questions if this is the path for her. Mr. Peanut Butter is back in the spotlight with his new project, Birthday Dad, but his love life has never been worse. And Todd continues to find himself in increasingly ridiculous situations but faces a rare dramatic storyline as he attempts to reconcile with his estranged mother.

Wait! Why did BoJack end?

Look, shows end, and six seasons is a pretty good run, especially for Netflix. That said, we definitely wouldn’t complain if BoJack kept going beyond Season 6, and we can’t blame the show’s creators for moving on to other projects.

In this case, however, it seems clear that Netflix was the one to decide when the show would end, though at least the company gave BoJack a chance to give a proper goodbye. On Twitter, series star Aaron Paul (Todd) confirmed that it was the streaming giant’s choice:

“We had a wonderful time making Bojack. Couldn’t be more proud. Fell in love with these characters just like everyone else did but sadly Netflix thought it was time to close the curtains and so here we are. They gave us a home for 6 beautiful years. Nothing we could do about it.”

The entire series of BoJack Horseman is streaming on Netflix.

More like this
Entertainment
Sep. 13, 2022
Everything we know about 'Dark' follow up '1899'
By Dais Johnston and Mónica Marie Zorrilla
Entertainment
Sep. 21, 2022
You need to watch DC’s most underrated movie of all time on Netflix ASAP
By Eric Francisco
Culture
Sep. 20, 2022
5 amazing sci-fi shows and movies leaving Netflix in September 2022
By Robin Bea