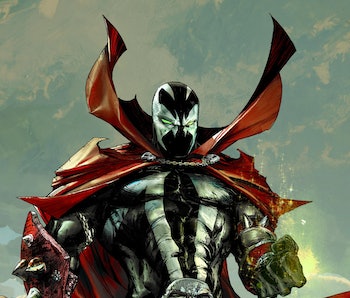 When decorated U.S. Marine Al Simmons is killed in cold blood, he makes a deal with the demon Malebolgia to come back as his assassin. But when he rises as Spawn, all hell really breaks loose.

Famed comic book creator Todd McFarlane is sitting in the director’s chair for the first time in a new movie adaptation of his 1990s Image Comics icon, Spawn. Since 2016, McFarlane has publicly worked to get a new movie based on his best-selling character off the ground. Finally, in 2020, things looked full speed ahead.

With a cast in place and the successful studio Blumhouse Productions ready to back the movie, it's only a matter of when, not if, Spawn hits theaters.

"Everybody in Hollywood wants an R-rated, dark comic book movie, and Spawn is at the top of their list," McFarlane said at a panel at FAN EXPO in Vancouver (via ComicBook.com) in 2020. "The phone calls are coming in fast and rapid. I've been talking to a couple of Academy Award people, I've got the investors getting lined up. It's changed ever since the Joker from being me begging them to do Spawn dark and creepy, to them asking."

Here’s everything we know so far about Todd McFarlane’s Spawn.

When will Spawn release in theaters?

There is no release date for Spawn. Production was at one point scheduled to begin in January 2019 in New York City. The project was put on the back burner for the majority of 2019, unfortunately. But after the critical and box office success of Joker, the idea of an R-rated comic book film has enticed studios. Since then, development on Spawn is allegedly back on track.

Is there a teaser trailer for Spawn?

No. Spawn has not yet entered production.

Who is writing and directing Spawn?

Todd McFarlane, who first came up with Spawn as a teenager before establishing a career in comics as an adult, wrote the script and will direct the movie. The project will mark the first time McFarlane directs anything; the 1997 movie starring Michael Jai White was directed by Mark A.Z. Dippé.

On making his directorial debut, McFarlane says he’s felt little to no nerves about his first feature film. At Fan Expo Canada 2019, McFarlane said (via Comic Book Resources), “I’ve directed this movie a thousand times in my brain.”

“If any of you saw this movie called A Star Is Born, Bradley Cooper directed that,” McFarlane said. “First-time director. You tell me if that movie looks like a first-time director. He was smart enough to surround himself with good people. I’m gonna be the least experienced person on that set, they’re gonna make me look good all day.”

Using Steven Spielberg’s Jaws as a touchstone, McFarlane wants to make a very different comic book movie, one that looks and feels more like a horror movie than the typical action blockbuster. Spawn himself will be a shadowy figure who lurks in the background, far away from the eyes of the human characters haunted by him.

“In the background, there’s this thing moving around, this boogeyman. That boogeyman just happens to be something that you and I, intellectually, know is Spawn,” McFarlane told ComicBook.com in 2017. “Will he look like he did in the first movie? No. Will he have a supervillain he fights? No. He’s going to be the spectre, the ghost.”

In a 2020 interview with Shoryuken, McFarlane said: "I have very few demands for the movie. It has to be rated R, there’s no debate around that ... I am less concerned about what happens in the movie as long as Spawn is 'cool' and 'badass.' The last demand is that I am the director. That’s it. Everything else is up for conversation."

Spawn is a comic book anti-hero created by industry heavyweight Todd McFarlane. In the early '90s, McFarlane, along with some of the comic book industry's hottest talents including Rob Liefeld, Jim Lee, Marc Silvestri, and Erik Larsen, defected from Marvel to form Image Comics.

One of the first titles published by Image was McFarlane's Spawn, featuring an original character McFarlane made up when he was a teenager. Born and raised in Detroit, Al Simmons was a decorated U.S. Marine who joins the CIA. While on a mission abroad in Botswana, Simmons is betrayed and killed by his superiors.

Sent to Hell for his deeds on Earth, Simmons strikes a deal with the demon Malebolgia to become a Hellspawn, a powerful supernatural entity. Upon his return to Earth, Simmons loses all memories except for his name and knowledge of his death, and embarks on a long journey to rediscover himself.

While Spawn is a powerful entity, one of his earliest weaknesses was a finite power source. Any time Spawn used magic, it depleted a finite resource. This encouraged Spawn to rely on his military training, leading Spawn to wield everything from machine guns to swords to other weapons in addition to his otherworldly powers.

Who will star in Spawn?

The cast for Spawn is currently as follows:

In May 2018, Deadline reported that actor Jamie Foxx was cast to play McFarlane’s title character. The casting was confirmed by Foxx as well as producer Jason Blum, head of Blumhouse Productions.

“We are thrilled Jamie Foxx will be playing the title role in our movie adaptation of Spawn,” Blum said in a statement. “He is an incredible actor and a huge fan of the Spawn Universe that Todd McFarlane created. With the depth of talent Jamie can commit to the role and Todd at the helm bringing the world of Spawn to life, we could not be more excited for this film.”

Later that summer, in July 2018, Jeremy Renner signed on to play Sam Twitch, a city detective from the comics who investigates cases that trace back to Spawn. In a statement, McFarlane praised Renner, saying: “As a first-time director, I wanted to surround myself with the most talent and the most skilled people I can on all fronts. I knew the person on screen the most is this police officer, Twitch Williams. We needed as strong a person as possible because he will be the face of the film. Jeremy [Renner] was at the top.”

In 2020, in an interview with Shoryuken at Final Kombat in Las Vegas, McFarlane said that "an Academy Award-winning guy" was once attached to Spawn but "fell off." The internet speculated McFarlane confirmed Foxx left Spawn, until ComicBook.com reported that McFarlane's "Academy Award" guy was a writer and not Jamie Foxx. McFarlane himself tweeted confirmation that the speculation was (caps lock) "WRONG."

As far as anyone knows, Jamie Foxx is still Spawn.

What is the plot of Spawn?

Story details for Spawn are under wraps. But based on existing interviews, we know that the film will focus less on Al Simmons and his transformation into Spawn and more about the array of human characters who get tied up into Spawn’s supernatural activities. The character of Detective Sam Twitch, played by Jeremy Renner, will anchor the film as one of the movie’s human leads.

So, is Spawn a superhero movie?

Todd McFarlane insists that his film, budgeted at a microscopic $10 million, will not be like a typical superhero movie. While Spawn is a comic book anti-hero, the film will not resemble anything audiences are used to from Marvel or DC.

“It’s impossible for me to believe that anyone will go to this movie and think it’s a superhero movie if they watch the trailer once,” McFarlane said in a 2017 Vulture interview. “It will say, without using bold words, ‘This is not a superhero movie. Period.’ If you think it is, don’t go. Because it won’t act, talk, feel like any of it. What it will act and talk and feel like are creepy little low-budget movies that scare the shit out of you.”

In a separate interview with ComicBook.com, McFarlane compared Spawn to the shark in Jaws.

“Although it was called Jaws, Jaws didn’t really talk a lot in his movie, right? He just kind of showed up at the opportune time to make the movie worthwhile. It was Sheriff Brody, the humans talking, chasing the fantastical thing that sort of made the movie, and to me there’s that element.”

He added, “Everything else is normal in this story, other than … the shadow moves, and at times, even when it moves, the cop just sort of thinks he’s losing his mind, so he doesn’t even trust that the shadow’s moving. If you’re a bad guy, then this thing is going to come, and it’s going to get you.”

Where can I go for a Spawn fix before the movie?

There are literally hundreds of Spawn comics to read and enjoy. They should easily keep you busy until the cameras start rolling. Elsewhere, Spawn is a playable fighter in the popular video game Mortal Kombat 11 as downloadable content (DLC).

This article was originally published on Sep. 3, 2019