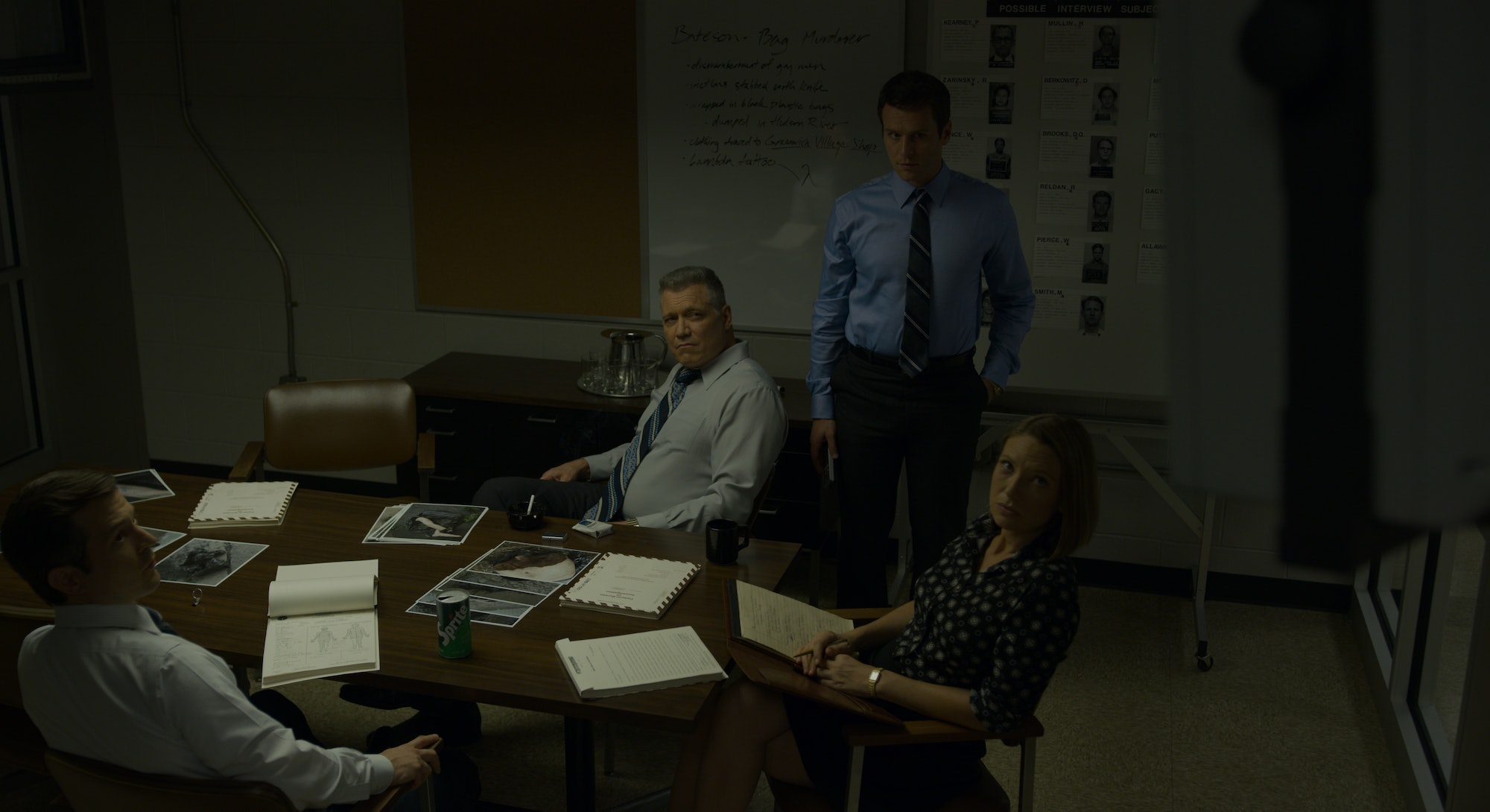 It’s only been a few weeks since Netflix dropped all nine episodes of Mindhunter Season 2 on August 16, but as the summer winds down and fall TV ramps up, fans are already anxiously looking to dive into a potential Season 3. Season 1 of David Fincher’s mind-bending serial killer drama debuted nearly two years ago — his well-known perfectionism tends to slow down production — so it isn’t likely we’ll be hanging out in the Quantico basement with our favorite members of the BSU anytime soon.

In the meantime, Inversers Chelsea Szmania and Mae Abdulbaki share their predictions for where Season 3 is headed after that chilling cliffhanger and which notorious serial killers are expected to show up next. Let’s get into it.

5. Is Brian a Future Serial Killer?

If you can’t get that image out of your mind of Brian intensely staring down that girl on the swings… yeah, us neither.

MAE: The short answer is: definitely yes. Though the show didn’t deeply explore why exactly Brian did what he did, the bread crumbs have been laid out for him to become a full-fledged serial killer down the line. Tench seems to know it, too, though he attempts to get Brian help. At the same time, he seems a bit resigned to the fact that things aren’t going well for his son, or in his marriage. At the end of the season, Nancy was fed up with Tench not making a concerted effort to ask for time off, and Tench probably knew it was only a matter of time. Will Nancy’s move affect Brian’s already fragile mental state? Probably, and it would play to Mindhunter’s advantage to further delve into the Brian/Tench dynamic for a potential Season 3.

CHELSEA: This subplot was a doozy. If there’s anything Mindhunter does exceedingly well, it’s exploring our greatest fears about the human psyche and pulling out storylines that are both chilling and often true. Thankfully, the real-life Tench (FBI Agent Robert Ressler) didn’t adopt a son who ended up being a psychopath, but the fictional story was enough to do me in. I don’t know about the rest of you, but despite watching real-life serial killers grace my TV screen night after night, the shocking truth about Brian, while not a true story, kept me up at night. If that fun little scene in the ice cream parlor wasn’t enough to convince you that Brian will probably, most definitely turn out to be a serial killer, then I don’t know what will. If there’s one thing Mindhunter has taught us, it’s that absolutely every bit of foreshadowing will be revisited later, and it’s hard to believe that moment in the ice cream shop wasn’t indicating something more frightening to come.

4. What Will Happen to Tench Now That Nancy Has Moved Out of Town With Brian?

Tench arriving home to the bare bones of his house felt like a cruel joke given what he’s been through this season. But he must have seen this coming, right?

CHELSEA: I mean, where do I even begin with Tench? Nancy was impulsive, yes, and it seems unwise to uproot your son’s life and everything he knows, given the circumstances. But what really bewilders me is that Tench didn’t see this one coming. He ignored Nancy’s plea for help by confronting her with excuse after excuse about his demanding job, instead of just having a damn conversation with his boss (the guy seems sketchy, but I’m pretty sure he would have understood). Then he expects to make up for it all when he returns from Atlanta, after months of barely being present? For someone who is so insightful, he really f**cked this one up. Given all of that, I highly doubt Nancy can just take off with Brian without permission from the social worker. Those are some serious red flags for anyone looking in from the outside. I have a feeling we’ll see Tench, a fairly composed man, finally crumble from the insurmountable pressure — and I doubt it’ll be pretty.

MAE: Tench definitely should have seen this coming, though I believe he at least had an inkling that things weren’t right with Nancy. He just chose to ignore the red flags. Nancy definitely let her frustration with her husband get the best of her, though, since moving Brian is a strange choice, given all that he’s going through. Perhaps she needed to get away from all the reminders just as much as he did. For all that Tench deals with in the psychology of serial killers, his overall lack of involvement with his wife and son during a difficult time was strange. Doesn’t he want to prevent Brian from ever becoming a potential serial killer? He seemed more concerned with keeping the whole thing under wraps, probably out of embarrassment, but Season 3 might finally see him deal with it, especially considering all the buildup. At this point, he’s just a powder keg waiting to explode.

3. Was Wendy Too Harsh in Ending Things With Kay?

Watching Wendy fall in love in a compilation of tender moments, only to then see it all fall apart so abruptly in favor of the more “exciting” storyline was lazy writing at best.

CHELSEA: This was such a frustrating turn of events, and I can’t help but direct my blame at the writers. In choosing to spend so much of the latter half of the season on the Atlanta Child Murders, other, less “thrilling” subplots fell by the wayside. Unfortunately for us, Wendy’s character development was the first on the chopping block. Wendy is patient, thoughtful and calculated, so it’s a bit uncharacteristic of her to abruptly end her relationship with Kay over one misstep. Yes, fear of intimacy has a way of making us run for the hills, but Wendy had just declared to Kay that she was all in. You’re trying to tell me that Wendy is totally calm, cool and collected when Tench admits to her that his son might be a serial killer in the making, but seeing her partner go weak by succumbing to the demands of a powerful man (which is, in my opinion, justified given what we know about how women were viewed and treated in the ‘70s!) is what sends her running? I just don’t buy it.

MAE: In an earlier roundtable, we discussed Wendy’s inability to fully be herself, having to compartmentalize her work and personal life to be able to focus and not be scrutinized over her sexual orientation. That’s why her actions with Kay were so jarring and disappointing, especially after Wendy had shared how much she’d like Kay to move in with her shortly before. Like you mentioned, it’s hard to believe that Wendy would lose it over Kay’s inability to stand up for herself to her husband after the divorce. What’s worse is that Kay explained herself and her situation, and Wendy still lashed out unnecessarily. It makes no sense and felt rushed, all so they could wrap up her storyline without even leaving a door open for a potential Season 3 reconciliation. Make it make sense!

2. What Could Season 3 Look Like, After Ending on That Dramatic Cliffhanger?

The impact of those final moments with the BTK killer should mean things are about to ramp up in Season 3, but we’ve been down this road before. At this point, we’re over the slow buildup of vignettes.

MAE: It’s strange: I expected Season 2 to revolve around the BTK Killer, and the only time we ever saw him was in vignettes that were sprinkled throughout the season. So with Season 2 out of the way, Season 3’s focus could finally shift to BTK. However, that doesn’t seem likely now that the finale also teased John Wayne Gacy — the serial killer known as “Killer Clown”. Season 2 proved that the show can’t tackle two serial killers at the same time, with BTK taking a backseat to the Atlanta Child Murders, so the writers might be better off picking a lane and staying in it.

CHELSEA: You’re right, this show does not know how to multitask. I, too, was disappointed by that buildup to the BTK Killer didn’t amount to a real plot. And, unfortunately, based on what we know about the real-life BTK Killer, he was active in the ‘70s and ‘80s but wasn’t actually caught by the FBI until the early 2000s. Unless Mindhunter does a miraculous time jump to 2005, I doubt we’ll gain any real traction with this particular storyline, despite what that cliffhanger seems to suggest. It just wouldn’t make sense with the timeline of events. My guess is we’ll continue to see a series of haunting vignettes throughout Season 3 and not much else… It’s a strategy that’s worked well over the course of two seasons, but this slow tease of information is going to get old (looking at you Pretty Little Liars).

1. Which Serial Killers Will Make an Appearance in Season 3?

We have a pretty good idea of who’ll make an appearance next season, but will they prove to be as interesting as fan-favorite Ed Kemper?

CHELSEA: In 2019, Ted Bundy is something of a celebrity name, and given where we left off in the timeline, it’s likely Tench and Holden will get some face time with the prolific killer in Season 3. America is also obsessed with his story — he was attractive, he was charming, and he also happened to kidnap, rape, and murder a bunch of young girls — so much so that the devilishly handsome Zac Efron played him in Netflix’s 2018 biopic Extremely Wicked, Shockingly Evil and Vile. Serial killers showcase the darkest version of ourselves, and in a case like Bundy’s, we see what a charismatic young man could be capable of — and it terrifies us. Mindhunter has a habit of capitalizing on this fear, forcing us to ask: Am I capable of doing something like that?

MAE: It already seems like Mindhunter Season 3 is gearing up to explore the backstory and killings of John Wayne Gacy. He appeared at the end of the Season 2 finale, so there’s no way the series will give up the chance to include him. Though he doesn’t fit into the standard outline of a serial killer (at least in the eyes of the BSU), Richard “the Iceman” Kuklinski could be another case Holden and Tench could cover. What’s so scary about Kuklinski is he claims to have killed more than 200 people over the course of four decades. Michael Shannon even played him in the 2013 film The Iceman, which documented the killer’s history, family life and murders. And given that Holden was confused by how Wayne Williams didn’t fit into the stereotypical profile of a serial killer, Kuklinski could help him expand upon the conclusions he’s already drawn.