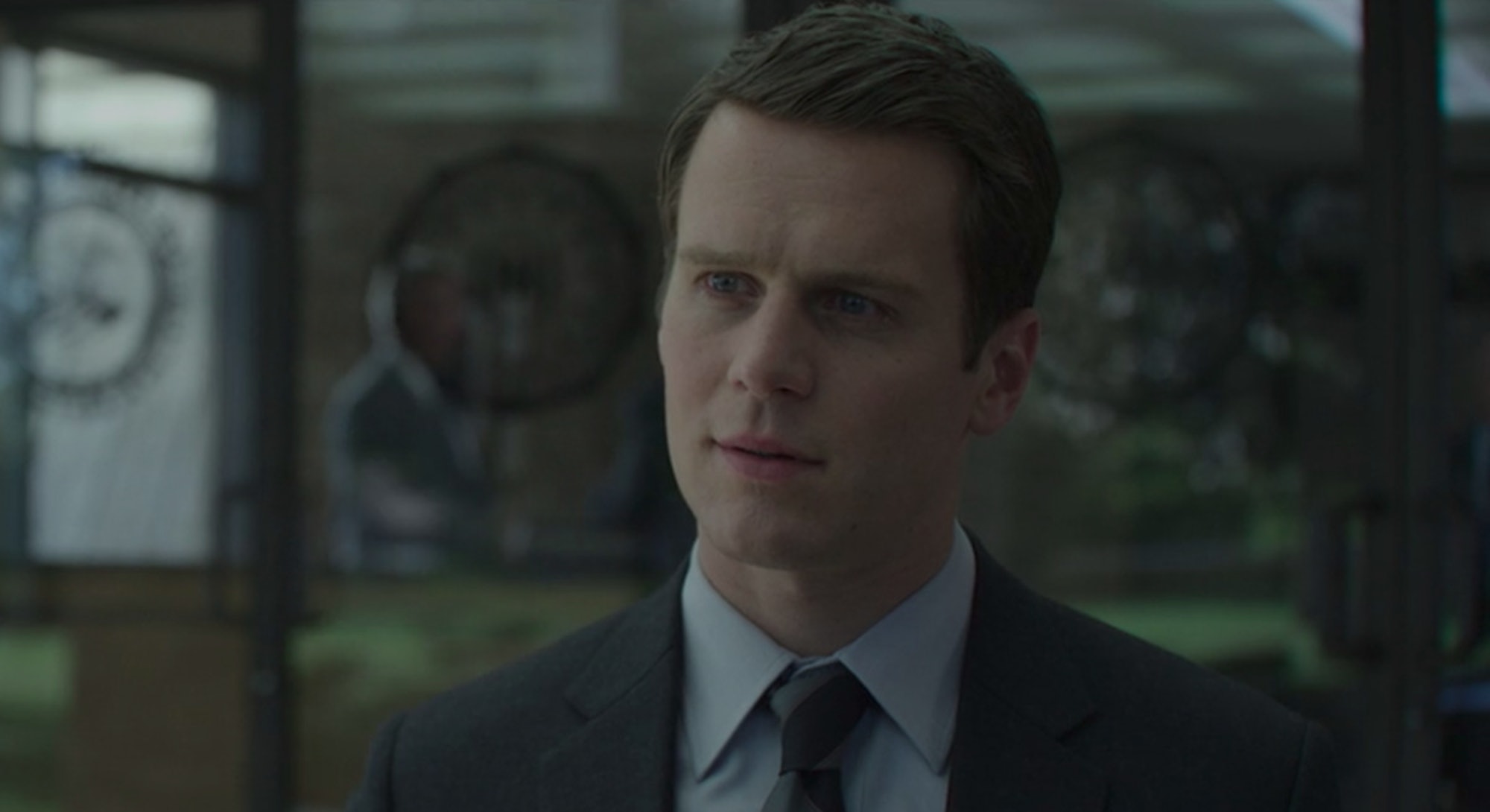 After almost two (very long) years, Netflix has finally released Mindhunter Season 2. And yes, it was definitely worth the wait. The first five episodes of the season offered a glimpse into the changing climate at the FBI — thanks to the introduction of Ted Gunn as the new chief of the Behavioral Science Unit — Agent Holden’s ongoing panic attacks, Wendy Carr and Agent Tench’s personal lives, and, of course, serial killer BTK and the infamous Charles Manson.

With all that Season 2 has offered, Inversers Mae Abdulbaki and Chelsea Szmania discuss the big surprises, events, and developments of Episodes 1-5. Here are the five things we need to understand about Mindhunter Season 2 so far.

5. What Was the Most Explosive Moment From Season 2 So Far?

Tench’s son Brian acting as an accomplice (sort of?) to the murder of a toddler … did all of that actually happen in real life??

MAE: I’m cheating here by tying both the crazy moment of Season 2 with Tench’s subplot. Tench’s personal life wasn’t really explored in Season 1 like Holden’s was, so the fact that the show decided to include a fairly disturbing story involving his son, Brian, was shocking. It seems to be there to showcase the effects of Tench’s work on his real life and how it affects his family, though it’s had the opposite effect so far. While Mindhunter is based on a lot of real-life events and people, records show that the incident with the toddler and Brian’s involvement did not happen. What a relief.

CHELSEA: I’ve gotta say, it’s becoming increasingly difficult to empathize with Tench given his natural inclination to brush his wife’s concerns aside regarding Brian, or really anything for that matter. Just play the dutiful housewife, Nancy and everything will be just fine. Though all of that aside, the Brian storyline does serve as an interesting parallel on the show, as you mentioned, given Tench’s day job. Part of what makes Mindhunter so disturbing to watch is that seemingly normal people can become serial killers. It could be your next-door neighbor, your coworker… This show is repeatedly hitting us over the head with the warning: See?! It could be anyone!

4. Who Exactly Is “Junior” Pierce and Will We See Him Again?

Mindhunter’s most baffling serial killer to date got a brief introduction in Season 2. Will we ever see him again?

CHELSEA: This season of Mindhunter has seen its fair share of high-profile serial killers, from Charles Manson to the Son of Sam, but what’s the deal with Junior Pierce? As is the case with nearly every character presented on the show, criminal or otherwise, we know Pierce is a real-life, cold-blooded killer, so it’s a bit odd the series chose to focus on him for only a brief moment of time. But perhaps given his adoration of mallomars and repeated insistence that he speaks “seven languages,” he was only ever meant to serve as comedic relief, which is an odd thing for me to write about on a show that explores, ya know, serial killers.

As history would tell us, William “Junior” Pierce (Michael Filipowich) is something of an enigmatic figure, as there’s not much we know about him on the show or in real life. According to Georgia’s Department of Corrections database, Pierce had a long criminal record of burglaries, theft, and arson that landed him in jail in the ‘60s, but perhaps the most interesting part of this whole story is that Pierce was released from jail in 1970 despite warnings from a prison psychologist, who deemed Pierce “dangerous to himself and others.” According to an article from the NYT in 1971, Pierce was rearrested on March 8 of the same year in connection to eight murders. So there you have it, folks — always listen to the psychologist!

MAE: William “Junior” Pierce is an enigma. You mentioned him being nothing more than comedic relief and it’s hard to disagree with that assessment, especially since the series included Pierce’s penchant for candy and his insistence that Libyan was one of seven languages he spoke (Libyan is not a language, Arabic is). Though his scene with Holden and Jim Barney was brief, Pierce didn’t really offer much information so I began to wonder why he was even included, besides serving as a reminder that he resided in the Atlanta prison system. Perhaps the show’s writers not knowing much about him hindered his fictional counterpart’s involvement in Season 2, but that doesn’t mean that his reappearance in a third season is completely off the table. Mindhunter has already gone off-book to give Tench’s son a criminal story and the same could be done with Pierce.

3. Is It Only a Matter of Time Before Holden Ends Up in the Hospital Again?

Between Holden’s panic disorder and everything going on with Tench’s son, Brian, the mental health discussion at the start of the season is more than troubling.

MAE: It was a bit frustrating how quickly this subplot seemed to disappear, especially since Holden was clearly very affected by what happened with Kemper. But there he is, visiting Ed again in Episode 5 without much of a reaction or acknowledgment of his panic attacks. Ford even shows signs of stress and panic when his former boss reveals he’d been forced to retire because of Holden’s screw-ups. This has the potential to get swept under the rug, but it’s more likely that Mindhunter is building up Holden’s storyline before sending him right back to the hospital.

CHELSEA: Holden is basically a ticking time bomb. Mindhunter isn’t exactly subtle with its foreshadowing. (Count how many times you hear Wendy ask Tench if he really thinks its best to leave Holden alone, and you’ll see what I mean.) So it’s only a matter of time before everything catches up to him. We now know that panic disorder can’t simply be fixed with a Valium. When you refuse to deal with your problems, they always have an unpleasant way of sneaking up on you later on. It’ll be interesting to see how this all plays out, but one thing we know for sure is that it won’t end well for Holden. A cautionary tale is afoot.

2. Did ‘Mindhunter’ Season 2 Do Right by Wendy?

It’s startling, given our current political climate, to watch Wendy hide her sexual orientation and “compartmentalize.” Is this something people, specifically women, still feel like they have to hide in order to succeed at their jobs?

CHELSEA: It’s 2019 and yet, sometimes it feels like we’re living out the ‘60s and ‘70s all over again given our slow progress towards equal human rights. At first, I was rattled by Wendy’s choice to hide her sexual orientation from everyone. She’s certainly a pioneer for women of that time so it almost felt out of character for her to lie about her personal life. But then I remembered what’s at stake. There’s a lot of men seated at the table, and while they’re all gunning for the top spot, Wendy is simply trying to fight to maintain her place in it all. Sound familiar? We might now have a fancy new name for this kind of behavior, but toxic masculinity has been around for decades, and women are still fighting their way to the top of the career ladder — while also fighting just to stay there.

MAE: Like you said, “rattled” is definitely the best way to describe watching Wendy’s situation unfold. What’s most disturbing is how easily these serial killers and criminals openly brag about what they’ve done, but Wendy has to hide who she is for fear of being treated differently or seen as abnormal. It’s hard enough for her as a woman in a male-dominated profession, so it’s easy to understand why she’s not forthcoming about her personal life. Look at the way she’s treated once she does admit to being a lesbian — Tench, Gunn, and Holden believed she was bluffing to get answers for their research. It’s easier to acknowledge how hard it was for women at work back then, even though women still face challenges and pushback in the workforce today.

1. How Have the Changes at the Behavioral Science Unit (BSU) Impacted the Characters So Far?

Finally, let’s check in with all our favorite FBI agents.

MAE: After the end of Season 1, the last thing anyone probably expected was a major change in leadership at BSU. Ted Gunn’s appearance and support of the project was immediately cause for suspicion, especially after it was revealed how he’d come into his position. But Gunn’s arrival has benefitted Holden the most. Even though he was traumatized by his meeting with Kemper, under Gunn’s guidance, Holden has more freedom to conduct research and ask for resources without fear of being turned away or even chastised.

Meanwhile, Tench and Wendy are more mindful than ever, afraid to aggravate the cases they’re working on. They’ve also been tasked with ensuring Holden doesn’t step out of line, so they’re not just doing their work but are also being forced to babysit their coworker. Gunn’s involvement this season has so far made for a more chilly and tense work dynamic, even though we’re supposed to believe that there’s less control from the FBI’s top brass.

CHELSEA: A show like Mindhunter, fictional or not, is a reminder of just how much red tape you have to plow through within the government to actually get anything done. Let’s be real, Ted Gunn is basically a villain in disguise. He’s this evil force that exists throughout the show, reminding everyone around him that if you don’t play by his rules, you won’t be around for very long. Despite all the progress Tench, Holden, and Wendy make, at times, it feels like a losing battle. It shouldn’t come as much of a surprise that entities of our government were/are corrupt, but I’ve gotta say, it’s still shocking whenever these revelations come to light. If Netflix decides to give us a Season 3, I hope we get to see Wendy use all of her badassery to take Gunn down.