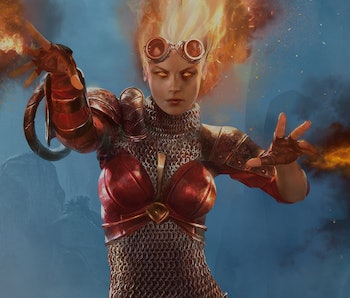 The Planeswalkers are coming to Netflix. Avengers: Endgame directors Joe and Anthony Russo are developing a Netflix anime series based on the fantasy universe of Magic: The Gathering, the world’s first trading card game that spawned numerous clones like Yu-Gi-Oh!, the Pokémon Trading Card Game, Blizzard’s Hearthstone, and many more.

An official press release from Netflix on June 3, 2019 explains that “The Russos will oversee the creation of an all-new storyline and expand on the stories of the Planeswalkers, which are Magic’s unique magic-wielding heroes and villains as they contend with stakes larger than any one world can hold.” Each Magic: The Gathering match is ostensibly a duel between two Planeswalkers who cast spells and summon various creatures from throughout the game’s universe to do battle.

Magic: The Gathering’s overall story began as told through sparse descriptions on the cards, but since its creation in 1993, Magic has grown exponentially with over 20 billion cards printed and dozens of tie-in fantasy novels exploring many different worlds.

Even though the show’s story is “all new,” an official image from Netflix teases a specific Planeswalker who will be familiar to Magic fans: Chandra Nalaar.

Here’s everything we know about Netflix’s upcoming *Magic: The Gathering series from the Russo brothers, including a release date that could arrive way sooner than you might think.

What is the plot of Netflix’s Magic: The Gathering anime series?

Netflix’s Magic: The Gathering series will tell a new story set in the game’s Multiverse, utilizing familiar characters to expand on existing worlds and ideas. So far, the first teaser features Chandra Nalaar, a young female human Planeswalker with a natural command over fire magic.

Her official character profile from Wizards of the Coast refers to her as a “confident, ardent, defiant Planeswalker” who joined Gatewatch, a group of Planeswalker heroes. Now, “she travels the planes of the Multiverse, battling monstrous threats and fighting for freedom.”

She most recently appeared in War of the Spark: Ravnica, a novel written by Greg Weismann published in April, in which she fought against the evil Elder Dragon, Nicol Bolas, alongside the rest of Gatewatch. Netflix’s new series could explore the aftermath of this story or another focused on Chandra and/or Gatewatch at a different point in time.

In the Multiverse, the possibilities are endless.

The Russos and Netflix are partnering with Magic maker Wizards of the Coast and parent company Hasbro on the series. Henry Gilroy (Star Wars Rebels) and Jose Molina (The Tick) will serve as showrunners and writers, with the Russos as executive producers.

“Our goal is to not only tell a compelling story leveraging Magic: The Gathering’s incredible body of work, but to also push the medium and perception of storytelling through animation. This series will cross the genres of suspenseful thriller, horror, and drama with deeply developed characters the likes of which are not often seen in animation.”

Magic: The Gathering will be animated by Bardel Entertainment, the same studio behind The Dragon Prince and Rick and Morty, so the series could look similar to one or both.

When will Netflix’s Magic: The Gathering series be released?

Hasbro announced in a 2021 investor’s call that Magic: The Gathering would premiere at some point in 2022. By comparison, Netflix’s Castlevania series was announced in February 2017, and the short Season 1 debuted that July. Netflix’s The Dragon Prince was announced in July 2018, and Season 1 was released in September 2018.

Will there be spin-offs to Netflix’s Magic: The Gathering series?

Despite the animated series not releasing yet, the Russos still have their eyes on expanding the franchise. During Comic-Con 2019, shortly after the show was announced, Joe Russo teased, “It’s an animated project with the potential to spin it off into live-action. It’s a game we love — we’re geeks and love Magic: The Gathering and we’re excited to tell stories with it.”

Magic: The Gathering will premiere on Netflix in 2022.