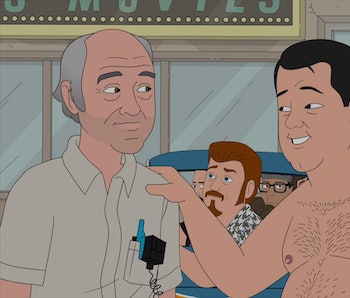 This article about Season 14 of Trailer Park Boys was originally published on April 9, 2019 and updated on May 8, 2021 following the release of the season on Netflix. Read on for the original article, with some new changes to reflect the latest updates on this topic.

In a way, Trailer Park Boys was always a cartoon, depicting a series of increasingly unbelievable events against the live-action backdrop of a Canadian trailer park, but by turning the show into a raunchy animated series, Netflix was able to raise the stakes even higher (the boys even went into space). So what’s next for Ricky, Julian, Bubbles, and the rest of the gang?

Is there a trailer for Trailer Park Boys Season 14?

Yes! A trailer for Trailer Park Boys Season 14 was released on YouTube on May 8, 2020, two weeks before the season premiered.

Who’s in the cast of Trailer Park Boys Season 14?

All of the main cast returned for Season 14 of Trailer Park Boys. Since the show remained animated, that made production a lot easier for the cast, who can presumably record from sound booths anywhere on Earth rather than reconvening in Canada each year.

The big question going into Season 14 is what Trailer Park Boys would do about Jim Lahey. The character was played by John Dunsworth, who passed away in 2017 after filming Season 12. After allegedly auditioning several voice actors, the show decided to use lines Dunsworth had recorded before his death. It took the same approach for Season 14.

After all, according to Dunsworth’s daughter Sarah (who also played the character Sarah on the show), her father had already agreed to the animated adaptation.

Trailer Park Boys Season 14 had 10 episodes full of hijinks featuring the guys. Everyone competes to make the most viral video, Bubbles runs for mayor, and Ricky attempts to “turn over a new leaf” after going to jail. In the season finale, the boys go on a spending spree due to a bank error in their favor, leading Ricky to fake his own death.

Will Trailer Park Boys continue in animated form after Season 14?

After two animated seasons, Trailer Park Boys next went live-action. Following the release of Season 14, the show put out a brand-new Christmas special in December 2020. The next month, they followed it up with Trailer Park Boys: Jail, a new season that premiered on January 1, 2021. The season was not only back to live-action but also went off of Netflix, airing on Swearnet. That could mean that Trailer Park Boys is ready to leave the animation game behind.

More like this
Culture
Sep. 20, 2022
5 amazing sci-fi shows and movies leaving Netflix in September 2022
By Robin Bea
Entertainment
Sep. 26, 2022
Everything you need to know about HBO's The Last of Us TV series
By Corey Plante and Willa Rowe
Entertainment
Sep. 26, 2022
Rick and Morty’s scariest episode ever copies the best sci-fi of the year
By Corey Plante

This article was originally published on April 9, 2019