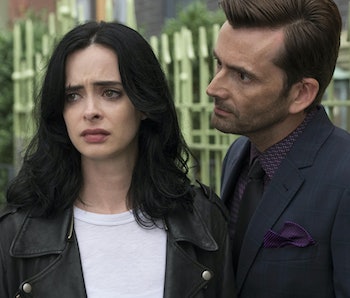 This article about Season 3 of the superhero drama Jessica Jones was originally published on March 11, 2019 and updated on April 30, 2021 following the release of the season on Netflix. Read on for the original article, with some new changes to reflect the latest updates on this topic.

Jessica Jones might be one of Marvel’s best and most consistent superhero shows on Netflix. Still, even everyone’s favorite drunken private investigator couldn’t survive what feels an awful lot like Netflix’s Decimation. Except instead of Thanos killing half, Netflix took out everyone by canceling every one of the Defenders-tier Marvel Netflix shows.

Here’s everything we know about Jessica Jones Season 3, from release date to details about the new villain Hellcat.

Jessica Jones Season 3 was released on June 14, 2019. Netflix had ordered a third season in April 2018, less than a month after Season 2 hit the streaming platform. The season was released four months after the streaming service announced the cancellation of the series.

When Jessica crosses paths with a highly intelligent psychopath, she and Trish must repair their fractured relationship and team up to take him down. But a devastating loss reveals their conflicting ideas of heroism, and sets them on a collision course that will forever change them both.

All of the core cast returned for Jessica Jones Season 3, and despite showrunner Melissa Rosenberg hinting in a tweet that the deceased Season 1 villain Kilgrave might return in some fashion, that won’t be the case. Entertainment Weekly reported that actor David Tennant confirmed he wouldn’t appear in the third and final season.

Kilgrave did pop up briefly in Season 2 as a figment of Jessica’s imagination, so it seemed at least possible that the same might happen in Season 3. But alas, that is not the case.

Mike Colter’s Luke Cage also made his return in the series finale. The character originally debuted as a Season 1 love interest to Jessica before headlining his own Netflix series — which was canceled back in October 2018.

How many episodes are in Jessica Jones Season 3?

When was Jessica Jones canceled?

On February 18, surprising no one, Netflix announced the official cancelation of not only Jessica Jones but The Punisher as well, making Jessica Jones Season 3 Marvel’s very last on Netflix.

Following the cancellation of Iron Fist and Luke Cage in October and Daredevil the following month, this felt inevitable.

The Punisher Season 2 hit Netflix in January, and other than Jessica Jones Season 3, there’s absolutely nothing else scheduled.