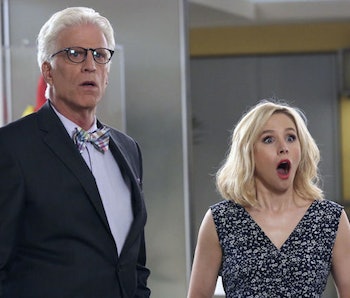 This article about Season 4 of the series The Good Place was originally published on June 10, 2019 and updated on May 23, 2021 following the release of the season on NBC. Read on for the original article, with some new changes to reflect the latest updates on this topic.

The Good Place Season 4 served as a bittersweet return for the beloved network comedy. Before the release of the season, Good Place showrunner Mike Schur recently announced (via The Hollywood Reporter) that the show would end after Season 4. Here’s everything we know about the final season of The Good Place.

When was The Good Place Season 4 announced?

The series was renewed in early December 2018 for a fourth season. In a statement (via TVLine), NBC co-presidents of scripted programming Tracey Pakosta and Lisa Katz shared their excitement for another season of the show.

“Congratulations to Mike Schur and an exceptional cast and crew, all of whom collaborate to create a thoughtful, mind-bending and hysterical series unlike anything else on television,” they said. “We can’t wait to see what unexpected stories the new season will bring.”

Sadly, Season 4 marked the end of The Good Place. Here’s the full statement from Schur about why he chose to end the series:

“After season one ended and aired and it seemed like the show was going to survive the gauntlet of being a TV show in the modern era, I was like, “Well, this show isn’t a typical show where the goal is to do it as long as we can and as many episodes as we can.” It was never designed that way — we do 13 episodes per year from the beginning. I knew I needed to map this out in the same way that I mapped out the first season, I needed to map out the whole show. I didn’t feel like it needed to be definitive but I needed to have a sense of how long I thought the idea could sustain itself. I came to the conclusion pretty quickly that it was four seasons. There were times early on where I felt like maybe five and maybe it’s three. (Laughs.) Once I settled on four seasons, I didn’t tell anyone — except the writers. I didn’t tell the studio or network because I wanted to make sure that I was right and I wanted to leave open the possibility that as we as a team developed the show, I wanted to allow the possibility that something could change and there was more I wanted to do. But it was pretty much always four from early on as a general map. We spent all of season three checking in and making sure that we were pacing things correctly and there was going to be enough time to do what we wanted but not too much time so that we were running in place. Toward the end of us shooting season three, I told the studio and then we told the network soon after that. It was completely dictated by the idea and how much juice I thought the idea contained and the pace at which we were letting story unfold and stuff like that. The nice thing about TV shows nowadays is it’s not a forced marathon. You can let the idea dictate the number of episodes that you actually do, which is great for creativity.”

He also hinted that despite the fact that The Good Place will end with Season 4, you could expect at least one more big surprise from the show before then.

When was The Good Place Season 4 premiere date?

Is there a trailer for The Good Place Season 4?

Yes! A first look at the final season of The Good Place aired in September 2019, shortly before the premiere.

How many episodes were in The Good Place Season 4?

The Good Place ended with 14 episodes. That’s a departure from the previous 3 seasons, which had 13 episodes apiece.

When did The Good Place Season 4 release on Netflix?

The Good Place Season 4 dropped on Netflix on September 26, 2020. That’s a full year after the season premiered on NBCA.

What’s the plot of The Good Place Season 4?

Season 3 ended with a pretty big cliffhanger. After striking a deal to recreate the initial experiment that kicked off the story, Michael and the gang set out to build a new neighborhood. Unfortunately, Bad Place demon Sean got to pick the new subjects, and he chose four people who were sure to bother our main characters.

That included a blogger who used to spread gossip about Tahani, and worse, Chidi’s ex-girlfriend Simone. In the end, both Simone and Chidi have their memories erased in an attempt to keep this experiment pure. That’s bad news for everyone but most of all Eleanor, who’s happily in love with Chidi.

Did The Good Place Season 4 receive any Emmy nominations?