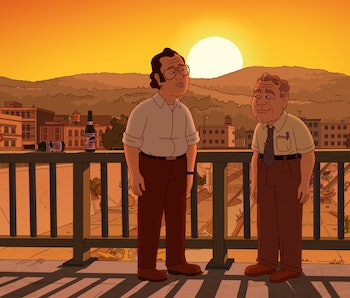 This article about Season 4 of the animated series F is For Family was originally published on January 25, 2018 and updated on April 16, 2021 following the release of the season on Netflix. Read on for the original article, with some new changes to reflect the latest updates on this topic.

F Is for Family returned to Netflix for a third season in 2018, but with just 10 short episodes it didn’t take long before fans were asking about a Season 4 release date, getting another batch of episodes about the Murphy family in 2020.

Here’s everything we know about the F is for Family Season 4 release date, trailer, plot, and more.

Was F Is for Family renewed for Season 4?

Yes! It took a while, but Netflix officially renewed F Is for Family for a fourth season on January 25, announcing the order for 10 more episodes via a report in Deadline.

When was the F Is for Family Season 4 release date?

Is there a trailer for F Is for Family Season 4?

The trailer for F Is for Family debuted on May 28, 2020, on Netflix’s official YouTube page.

What’s the plot of F Is for Family Season 4?

Season 4 of F Is for Family focused on Murphy patriarch Frank (Bill Burr) dealing with the arrival of his estranged father “Big Bill” (Jonathan Banks). Frank spent the entirety of the season trying to get on the same page as his dad, and also trying (and failing) to prove he was a better father than his own. The curmudgeonly senior was able to realize the error of his ways in the season finale, only to die right in front of his family.

While the Murphy family lost a member, it gained a new one as Sue (Laura Dern) gave birth to baby #4 in the finale. Elsewhere in the family, Kevin (Justin Long) struck up a relationship with new character Alice Goldman (Jamie Denbo), meek middle child Bill (Haley Reinhart) takes a try at hockey, and princess Maureen (Debi Derryberry) forms an unlikely relationship with unhinged Bridget Fitzsimmons. The show even took an episode to focus on the life of Rosie (Kevin Michael Richardson), the community’s first Black alderman.

Was F Is for Family renewed for Season 5?

This article was originally published on Jan. 25, 2018