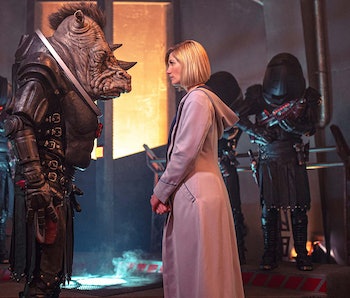 This article about Season 12 of the sci-fi series Doctor Who was originally published on December 11, 2018 and updated on April 20, 2021 following the release of the season on BBC One. Read on for the original article, with some new changes to reflect the latest updates on this topic.

After Doctor Who Season 11 introduced a new Doctor, companions, and showrunner, Season 12 keeps up the breakneck pace to continue the adventures of the madcap TARDIS crew. Here’s everything we know about Season 12, including release date, cast, and the plot of the annual holiday special.

When was Doctor Who renewed for Season 12?

The official Doctor Who Twitter and Instagram confirmed in December 2018 that “The Doctor and her friends will land again with an all-new season … in early 2020.”

When was the Doctor Who Season 12 release date?

Doctor Who Season 12 kicked 2020 off right. It premiered on January 1. The series followed up with Episode 2 four days later on January 5, and episodes continued weekly until the finale on March 1.

Is there a trailer for Doctor Who Season 12?

Yes! The trailer for Doctor Who Season 12 released on November 23, 2019. It featured the Doctor and her companions’ various misadventures throughout time and space, and indicated that something is coming for her this time around.

What was the plot of Doctor Who Season 12?

Season 12 of Doctor Who featured a load of new adventures, some familiar faces, and new takes on old characters. The season introduced a new iteration of chief nemesis the Master, who shows the Doctor the truth about her origin as the “timeless child.” Season 12 also sees the first appearance of Captain Jack Harkness on Doctor Who for the first time in a decade.

Other plots from Season 12 include the Doctor putting herself in the middle of the Nikola Tesla/Thomas Edison feud, a Cyberman haunting Mary Shelley, and the companions experiencing mysterious visions to save the day in 14th century Aleppo. The season included two-part episodes for the first time since Season 10, and was the first to feature multiple two-part episodes since Season 9.

Was there a new doctor or showrunner in Doctor Who Season 12?

Nope! Jodie Whittaker and showrunner Chris Chibnall stuck around for Season 12, as well as the Doctor’s current companions. The official announcement from BBC said “The Doctor and her friends,” implying that the core Team Tardis group wouldn’t change.

Starbust Magazine wrote about rumors claiming that both Chibnall and Whittaker might leave the show following Season 12. These rumors suggested that Doctor Who showrunner Chris Chibnall weren’t happy behind the scenes, but there’s no definitive source or reason to believe this is true.

Who was in the cast of Doctor Who Season 12?

Doctor Who Season 12 saw Jodie Whitaker return as the Doctor. Like Season 11, she was accompanied by Bradley Walsh, Tosin Cole, and Mandip Gill as Graham O'Brien, Ryan Sinclair, and Yasmin Khan, respectively. The holiday special, though, would prove to be the final episodes for Walsh and Cole, who exited the series thereafter.

Legendary comedian Stephen Fry appeared in the opening episode of the season. Lenny Henry, co-founder of the charity Comic Relief, guest-starred in the first two episodes. Sacha Dhawan portrayed the newest incarnation of the Master. Additionally, John Barrowman returned to Doctor Who for the first time since the Season 4 finale to play Captan Jack Harkness.

Did Doctor Who Season 12 have a holiday special?

Yes! As is tradition with the Doctor Who revival series, Season 12 did indeed have a holiday special. Airing on January 1, 2021, “Revolution of the Daleks” has Jack Harkness free the Doctor from prison after her arrest during the season finale. Meanwhile, Graham, Ryan, and Yaz discover a plot to grow Dalek clones to create defense drones.

Was Doctor Who renewed for Season 13?

Looks like we’ve got at least one more year in the TARDIS! Season 13 of Doctor Who was announced in November 2019, with both Jodie Whitaker and Mandip Gill returning.