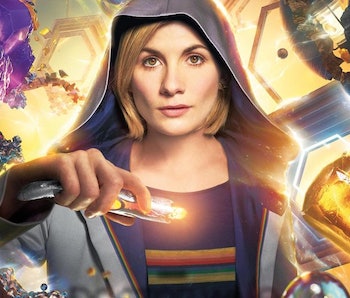 Doctor Who Season 12's latest episode, “Fugitive of the Judoon,” dropped two pretty massive bombshells on Sunday night, introducing Jo Martin as the first Black Doctor, along with the unexpected return an all-time favorite companion. Whovians the world over have been freaking out with glee ever since, but does it mean this character is back for good? What does it tell us about the events ahead in Season 12?

Spoilers ahead for “Fugitive of the Judoon.”

After years of speculation among the fandom, John Barrowman has returned to the role of Captain Jack Harkness. He's a mysterious guy who's lived a decidedly non-linear life, a product of the timey-wimey nature of Doctor Who. First introduced in the Season 1 episode “The Empty Child,” Captain Jack is a former Time Agent from the 51st century. He's also immortal, and therefore not subject to nature’s laws.

He's been a recurring character throughout the rebooted BBC series, and at one point had his own spinoff show, Torchwood.

That spinoff saw Captain Jack join Torchwood Three, a group tasked with protecting Earth from alien invasions and keeping tabs on changes in the timeline. Torchwood: Miracle Day confirmed the organization’s previous agents had all abandoned Torchwood Three. Doctor Who’s two-parter “The End of Time” confirmed Torchwood doesn’t exist anymore: the CIA has declared all of its agents deceased.

In “Fugitive of the Judoon,” Captain Jack returns in search of the Doctor, not realizing the new iteration is a woman. While he and Jodie Whittaker’s version of the Doctor never cross paths in the episode, Captain Jack warns her companions to beware the “lone Cyberman,” cautioning that the Doctor shouldn’t “give it what it wants.”

Captain Jack knows that a Cybermen empire will rise in the future, eventually defeated by an elusive group known only as the Alliance. Unfortunately, he's teleported away before we can learn anything else about it.

While “Fugitive of the Judoon” didn’t offer much in the way of what Captain Jack has been up to in years since his last Doctor Who appearance, it’s possible this version of the character may even come from an alternate timeline.Think about it. Someone who knows about future events in great detail, but isn't aware that the Doctor is now a woman must come from a different timeline, right?

If that’s the case, then it’s also possible that the Torchwood of a different reality could still exist, and Captain Jack is still its leader. It’s hard to tell at this point since it’s unclear where in the timeline this Captain Jack is actually from. Time travel and immortality makes for a confusing combination, after all. As is usually the case with Doctor Who, only time will tell what Captain Jack's return means.

Doctor Who Season 12 airs new episodes every Sunday at 8/9c on BBC America.