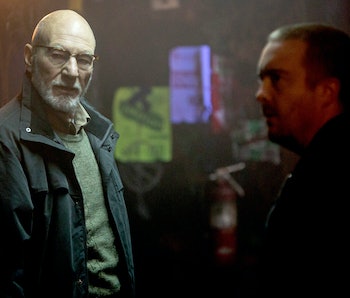 The thriller genre has long thrived on stories about characters who get trapped in unlikely situations and have to fight their way out. Some of the greatest thrillers of all time follow that simple formula: Die Hard traps its protagonist in a Los Angeles skyscraper with a band of ingenious thieves. Even Jaws generates most of its tension from the fact that its three male protagonists are basically trapped on a boat.

That said, very few thrillers feature settings as specific and unique as the one in Green Room. The 2016 Jeremy Saulnier movie focuses on the members of a punk band as they try to escape their venue’s backstage room. The film, which clocks in at a tight 95 minutes, mines every ounce of tension, dread, and violence from its premise as it possibly can, and the result feels more intense and lived-in than most of its genre contemporaries.

Green Room follows the Ain’t Rights, a punk band from Washington, D.C., whose tour through the Pacific Northwest takes an unfortunate turn when a canceled show is replaced with a gig in the woods near Portland. When they arrive, the Ain’t Rights discover that the venue is a gathering place for neo-Nazis. While they play anyway and almost get through the show without issue, the band is forced to fend for their lives when they stumble across a murder at the club.

Green Room doesn’t waste much time getting to the meat of its story, which lets it stretch its central conflict out and define many of its characters solely by how they react to what’s happening. That’s particularly true when it comes to Darcy Banker (Patrick Stewart), the leader of the neo-Nazis hellbent on killing every member of the Ain’t Rights. Stewart’s performance is uncustomarily cold and calculated, which makes the clinical, no-nonsense manner with which he approaches every problem haunting.

Green Room tonally and structurally adopts the same attitude. The film is ruthless and unflinchingly brutal in a way that’s often shocking and occasionally horrifying. Saulnier’s well-paced, unbearably tense script allows a bad situation to slowly resemble a full-blown nightmare as the Ain’t Rights’ injuries and losses pile up. The result feels like a uniquely unnerving cross between an unsparing horror film and a low-budget, punk rock-inspired thriller.

The film’s reliance on gory practical effects further heightens the notes of horror scattered throughout. One sequence, in particular, gives a character a chance to use a box cutter to create an image that’s impossible to forget. While Green Room’s heavy focus on bodily harm and physical injury may prove too nasty for some viewers, it makes the violence throughout the film feel even more dangerous and real.

Saulnier offsets the cold brutality of his script and visual style by packing Green Room with performers who can breathe humanity into even the most thinly sketched characters. In addition to Stewart, whose villainous turn here ranks as one of his late-career highlights, the film also makes great use of Alia Shawkat, Joe Cole, Callum Turner, and Macon Blair. Imogen Poots, meanwhile, gives another quietly confident performance as Amber, a girl whose familiarity with Darcy and his neo-Nazi crew makes her the kind of undaunted foe that Green Room needs.

At the center of the film, though, is Anton Yelchin, whose performance was one of his last. In a film so often defined by its viciousness, Yelchin manages to bring real heart and vulnerability to a thriller that would be weaker without it.