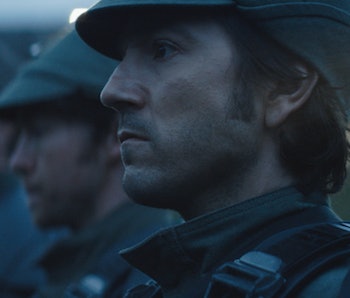 Luthen Rael is known by the Imperial Security Bureau as “Axis,” and that’s an apt moniker. In Andor, Cassian and Mon Mothma’s stories are totally separate, connected only by this one character. He’s the center of the new Rebellion movement, the middle-man between all the players.

However, we know next to nothing about Luthen. In Episode 10, we finally got a glimpse into his past ... and it could mean he’s a former Jedi. Intruiged? Let’s dive in.

In conversation with his ISB mole, Luthen spells out what’s sacrificed in dedicating his life to overthrowing the Empire. His source wants to stop providing information. He’s a father now and has too much to lose. But Luthen makes it very clear that is not an option, saying:

“I've given up all chance at inner peace. I've made my mind a sunless space. I share my dreams with ghosts. I wake up every day to an equation I wrote 15 years ago from which there's only one conclusion, I'm damned for what I do. My anger, my ego, my unwillingness to yield, my eagerness to fight, they've set me on a path from which there is no escape. I yearned to be a savior against injustice without contemplating the cost and by the time I looked down there was no longer any ground beneath my feet.”

So what just happened 15 years ago? It just so happens that about 15 years before the events of Andor lines up perfectly with Order 66. Maybe he was a Jedi once upon a time and saw his friends and colleagues shot down in front of him, setting him on this path “from which there is no escape.”

There’s also some physical evidence. All the way back when Luthen set Andor up with the guerrilla fighters on Aldhani, he gave Cassian a necklace made of “blue Kyber,” something he couldn’t put words to the value of. How would he know the value of a Kyber crystal unless he knew its true purpose — its use in lightsabers?

There are some pros and cons to this theory. While Luthen secretly being a Jedi would certainly be cool, it would undermine one of the greatest assets of Andor: focusing on the everyday people who made the Rebellion possible (and not those with supernatural powers). If the head of this movement is a Jedi, it could make that all moot.

However, there could be a happy medium. Maybe much like Obi-Wan Kenobi or Cere from Jedi: Fallen Order, Luthen could be a former Jedi. If Luthen saw his friends slaughtered, he may have seen that exerting Force powers isn’t worth it. If the Jedi being in power results in the fall of the Republic, it shouldn’t be replicated. Maybe he gave up his title and sought to find those without Force sensitivity in order to kickstart the Rebellion, people like Mon Mothma, Vel, and Cassian Andor.

We know that eventually, the Rebellion will hinge on Jedi. But while the Rebellion is a bunch of plucky fighters against Imperial bureaucrats, Luthen would be wise to keep those powers at bay and focus on the qualities that matter: the ability to sacrifice, to risk everything, and to prioritize the movement.