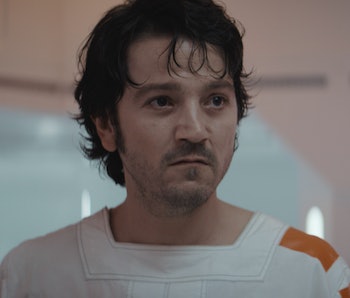 Star Wars has been about “Episodes” ever since George Lucas took the original Star Wars movie and renamed it Episode IV: A New Hope. But it took Andor for the franchise to finally embrace the art of the television episode.

In Episode 10, Andor proves it can do something we sometimes take for granted: tell a story with multiple plotlines that still has unifying themes. It’s the kind of thing we expect from sitcoms (remember Scrubs and its tidy ending monologues that tied everything together?), but it’s something that’s been missing from Star Wars since the very beginning.

The question is, now that Star Wars has unlocked this storytelling technique, can it expand beyond Andor to the other Disney+ shows and maybe even future movies?

Andor Episode 10 contains three threads braided together into a complex tapestry. First is Cassian Andor’s six-year imprisonment in a labor colony on a nonsense charge. Finally, after two episodes of hard labor, he leads a prison riot that sees the entire facility rendered powerless.

Meanwhile, Senator Mon Mothma tries to raise money for her “charity,” a front for the burgeoning Rebellion. Davo Sculdun, a fellow Chandrilan, offers help in return for an introduction (and, implicitly, an arranged marriage) between her daughter and his son.

Finally, also on Coruscant is Luthen Rael, who’s alerted to heightened interest in Rebel actions by his insider on Imperial Security Bureau. The source tries to back out, but Luthen reads him the riot act:

“I yearned to be a savior against injustice without contemplating the cost and by the time I looked down there was no longer any ground beneath my feet. What is my sacrifice? I'm condemned to use the tools of my enemy to defeat them. I burn my decency for someone else's future. I burn my life to make a sunrise that I know I'll never see.”

This monologue becomes the thesis statement for the entire episode. Sometimes, freedom means shackling yourself even more. Freedom takes sacrifice. It means fighting against those who are punishing you, smiling and hosting dinner parties for those complicit with fascism, and playing by the rules of the people you hate.

Though Cassian, Luthen, and Mon Mothma have no contact with each other in this episode, their stories each reflect this core concept. And, as a result, they work together to amplify this message.

This is the kind of thematic unity we rarely see in Star Wars. The movies typically feel like three or four adventures playing out with no clear connection until the characters all collide for a final battle. And while The Mandalorian has pushed Star Wars forward in many ways, it’s too focused on its singular story to pull off the kind of storytelling technique we just saw in Andor.

This is also an approach to storytelling that’s disappearing from television as a whole. Compare episodes of Mad Men or The Sopranos, where characters would learn the same lessons parallel to each other, with late-season episodes of Game of Thrones. In those, the action would jump randomly from character to character, merely moving the plot along like a soap opera.

Maybe Andor isn’t just setting a new standard for Star Wars television, but helping prestige TV, in general, refocus its priorities. Plot twists and mysteries have become a monomaniacal focus of storytelling, but Andor is showing us that there are ways to prioritize thematic elements across multiple storylines without losing the plot along the way.