“The answer's in the future” 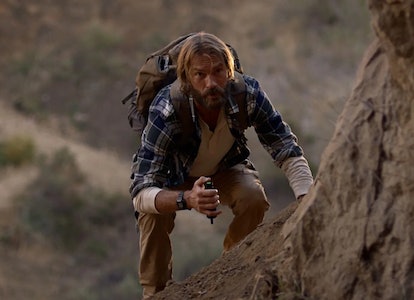 Watching an indie movie on Netflix is always a gamble. Sometimes you get a low-budget horror movie that was made by a well-connected teenager; other times you land on a true hidden gem that makes you wonder why it wasn’t a blockbuster, to begin with.

This 2017 movie is definitely the latter, combining a well-used movie trope with a budget that’s spent in all the right places. Here’s why you need to check out this unsung hero of Netflix before it leaves on April 16.

Time Trap is a 2017 sci-fi thriller written by Mark Dennis and co-directed by Dennis and Ben Foster. It follows a group of teenagers as they look for their professor who mysteriously went missing after a local cave exploration.

The film begins with a cold open that shows the professor, played by Andrew Wilson (the brother of Owen and Luke Wilson) exploring said cave. But instead of falling down a crevasse or injuring himself, he encounters a strange figure and an otherworldly wall. We then see his students prepare to go on a rescue mission to find him.

Time Trap has the perfect premise for a Descent-style horror movie as the teens uncover a threat hidden in the depths of the cave and must fight to survive. But these teens don’t just find evil in the cave, and there are no monsters awaiting them there. What they do discover is... the Fountain of Youth.

That’s right, the mythical fountain of youth is in this cave, but it doesn’t work like some magical youth elixir. Instead, time runs slower inside the cave. So, spending one hour inside the cave equals weeks outside of it.

This brings time dilation into the equation, only making the characters’ mission more difficult. After all, how can they possibly find their professor when every minute they are quickly becoming missing persons too?

Time Trap originally began as a found footage movie, but it only relies on that filmmaking style for a few key scenes. That allows the movie to have the authenticity of a quasi-documentary while still having plenty of artistic freedom to show the inhabitants of the cave over the centuries.

But like other time dilation movies, such as Interstellar, there’s no real way for this movie to have a happy ending. Time always runs forward and at such a pace that none of these kids will be able to see their parents again. So how do you create a satisfying ending to a catastrophic movie if you can’t undo the disastrous event? The answer is far more ambitious — and involves a lot more sci-fi — than you’d ever expect.

If you’re a fan of survival movies, time travel movies, or both, this low-budget movie manages to pack a huge punch. Just as these characters can’t undo time, once this movie is gone from Netflix it’s gone. Seize the opportunity to watch it while you still can.

Time Trap is streaming on Netflix until April 16.

More like this
Culture
Jan. 28, 2023
Sci-fi legend René Laloux’s final movie is his most opaque — and maybe his best
By Jake Kleinman
Science
Jan. 28, 2023
The best mystery thriller on Netflix ignores a basic fact about hydrogen energy
By Tara Yarlagadda
Culture
1 hour ago
Peter Jackson’s Lord of the Rings Trilogy Never Should’ve Worked — Miraculously, It Did
By Hoai-Tran Bui
LEARN SOMETHING NEW EVERY DAY.
Related Tags
Share: