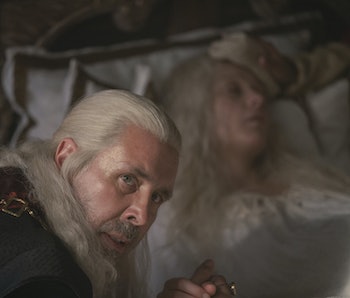 We’re not sure how they pulled it off, but HBO managed to squeeze in not one, not two, but four traumatic birth scenes in the course of House of the Dragon’s first season. That’s four moments in just 10 episodes where we saw Aemma Arryn, Rhaenyra Targaryen, and Laena Velaryon in bloody, dire agony, attempting to deliver a baby sans modern medicine.

If you’ve seen House of the Dragon, or its predecessor, Game of Thrones, then you know how the miracle of birth goes for these women: Not great!

Aemma Arryn (Sian Brooke), King Viserys I Targaryen’s first wife, tells her daughter, “the birthing bed is our battlefield.” She puts up as much of a fight as she can, but bleeds to death after a primitive cesarean section. The baby barely makes it a day before joining his mother on the funeral pyre.

Rhaenyra Targaryen’s (Emma D’Arcy) third illegitimate baby with Ser Harwin Strong is born healthy after a grueling labor, but the goriness comes after: She’s forced to do a sadistic walk of shame to show Alicent Hightower her newborn while exhausted, pained, and dripping blood.

Also in Episode 6, Laena Velaryon (Nanna Blondell) opts to incinerate herself and her unborn son via dragon instead of going through with a cesarean that would have left her dead anyway. And House of the Dragon fans hit their tolerance for traumatic baby deliveries during the Season 1 finale, when Rhaenyra goes into harrowing premature labor, squatting down and forcing the child out to land in a splat of placenta, blood, and miscellaneous neonatal fluids. Covered in scales and other dragon bits, the deformed stillborn girl is a tough sight.

“She is getting a repeated education in grief,” D’Arcy says. “She loses her lover [Harwin Strong], and she loses her father, too, but this episode, losing her son really shifts the goalposts on what that suffering can do to the body. So I knew, heading into this episode, this was the moment when a massive reframing would happen to her.”

D’Arcy says that the birth of her stillborn daughter was especially important to show because it revealed that Rhaenyra was scared of dying or being incapacitated by childbirth. Fear trumps her ability to stay calm enough to receive the aid of midwives. Rhaenyra instead takes matters into her own hands and “prioritizes her own bodily autonomy,” D’Arcy says.

D’Arcy added she takes “real issue with the idea that we shouldn’t see women in labor depicted with gritty realism, and blood, and placentas” and that “What it feels like is that we want women to conform to a certain image.”

Regardless of whether you agree, we may have another traumatic birth or two ahead of us in House of the Dragon Season 2. Maybe they’ll be integral to plot and character arcs, or maybe HBO can’t help but stick to their shock factor brand.

House of the Dragon Season 1 is available to stream on HBO Max.

More like this
Entertainment
November 16, 2022
House of the Dragon Season 2 could show the decline of a powerful family
By Mónica Marie Zorrilla
Entertainment
November 17, 2022
The White Lotus is stealing a dangerous narrative trick from Game of Thrones
By Jake Kleinman
Culture
November 14, 2022
Neil Gaiman takes on The Sandman’s worst critics [Exclusive]
By Mónica Marie Zorrilla and Claire Cameron
Related Tags
Share: