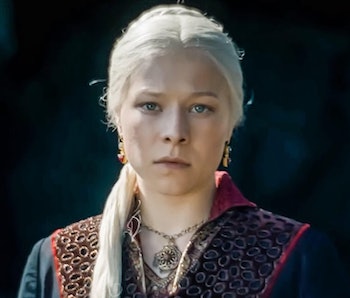 “When the babe at last came forth, she proved indeed a monster,” George R.R. Martin writes in Fire & Blood, the source material for HBO’s House of the Dragon. “A stillborn girl, twisted and malformed, with a hole in her chest where her heart should have been and a stubby, scaled tail. The dead girl had been named Visenya.”

House of the Dragon Season 1 toyed with the canon during its 10-episode run, but it mostly stayed faithful to the book it was based on. And in the Season 1 finale, House of the Dragon didn’t hold back from its brutal and bleak roots, giving Rhaenyra Targaryen multiple tragedies to contend with. The Queen has had to deal with the loss of her father, King Viserys I Targaryen, the murder of her second-born son, Lucerys Velaryon, the loss of the Iron Throne to her half-brother Aegon II Targaryen, and the stillbirth of her sixth child, baby Visenya.

Visenya arrives about seven months into the pregnancy, coming way too soon and with ferociously painful contractions that kick off as soon as Rhaenyra gets word of the coup d’état masterminded by Alicent and Otto Hightower. What follows is a gruesome birthing scene in which Rhaenyra, amid shots of a dragon roaring, delivers her stillborn child and a mess of amniotic fluids and blood onto the floor. It’s a shocking scene, but it unfolds so quickly that we barely have time to register what exactly transpired until we see Rhaenyra and Daemon prepare their daughter’s corpse for the funeral pyre.

If for some reason, you were hoping for a really good look at that dead baby, you’re in luck. Barrie Gower, a master of horror makeup and prosthetics design whose resume includes Stranger Things, Chernobyl, and The Green Knight, shared an up-close-and-personal image of the silicone baby created for the series.

Does she have greyscale or is she just a Targaryen?

Game of Thrones fans immediately went into a theory-crafting tizzy. Does the baby have greyscale, a deadly fictional ailment that causes the skin to flake and appear stone-like, or was this Targaryen baby destined to be a dragon? “Dragonscale,” as fans call it, is when Targaryen babies emerge stillborn, usually deformed with dragon-like features such as tails, scales, and claws. Daenerys’ baby with Khal Drogo was born this way, though we were led to believe that was because a witch put a curse on her, not because of the “dracomorph” theory, which gets a bit out there.

The World of Ice and Fire, one of George R.R. Martin’s companion books, says the following:

The great beauty of the Valyrians — with their hair of palest silver or gold and eyes in shades of purple not found amongst any other peoples of the world— is well-known, and often held up as proof that the Valyrians are not entirely of the same blood as other men. Yet there are maesters who point out that, by careful breeding of animals, one can achieve a desirable result, and that populations in isolation can often show quite remarkable variations from what might be regarded as common. This may be a likelier answer to the mystery of the Valyrian origins, although it does not explain the affinity with dragons that those with the blood of Valyria clearly had.

The book also explains that Valyrians (which the Targaryen descended from) practiced blood magic and twisted the flesh of beasts and man “to fashion monstrous and unnatural chimeras.” The “dracomorph” theory suggests that Targaryens are first conceived as dragons when they’re in the womb, and eventually — almost at the very end of gestation — develop human characteristics. This could explain why Daenerys’ and Rhaenyra’s babies were born in the same mutated manner after similarly stressful situations and premature pregnancies.

While just a theory, this would also explain how and why the Valyrians thought themselves to be more gods than men. If their wombs feature a transformation from dragon to human, it’s no wonder they can bond with dragons, withstand fire, and enjoy other preternatural abilities.

Hopefully, we won’t see another birth like Visenya’s on House of the Dragon, but we’re eager to learn more about the franchise’s most fascinating noble house in Season 2. Maybe there isn’t just tragedy afoot, but magic too.

House of the Dragon Season 1 is streaming now on HBO Max.