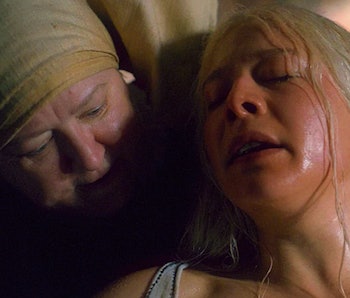 From its first moments, House of the Dragon made it clear it wasn’t shying away from one specific type of violence.

In the very first episode, we saw Queen Aemma die during a failed C-section. Earlier, she told her daughter Rhaenyra that “the child bed is our battlefield. We must learn to face it with a stiff lip.” As she drew her final breaths, the scene cut between Aemma and an especially gruesome jousting tournament outside the castle.

It was an interesting scene, but then it just never relented. House of the Dragon may have less sexual violence than Game of Thrones, but the replacement is just the lesser of the two evils.

Childbirth quickly became a motif for House of the Dragon. The show’s 10-year time jump was introduced as Rhaenyra Targaryen gave birth to a son of her own. Later, Lady Laena, faced with a fatal delivery, decides to go out like a dragon rider and self-immolate using her dragon.

But House of the Dragon saved its most brutal childbirth scene for last. Rhaenyra, facing the death of her father and a usurper taking her rightful spot on the throne, goes into early labor.

In House of the Dragon Episode 10, Rhaenyra refuses any help, literally catching the child as it comes out of her. There’s a rush of blood and the baby comes out sleeping and deformed. This is accurate to the books, where the fetus is described as “twisted and malformed, with a hole in her chest where her heart should have been, and a stubby, scaled tail.” We see this up close and personal.

Whereas the show’s other labor scenes could be explained away as moving the plot forward and emphasizing the power of House of the Dragon’s female characters, this one was egregious. Not only did it do little for the larger story, but it was depicted with far too much detail. And for anyone have experienced stillborn births or pregnancy loss, it’s a grim reminder.

According to the National Library of Medicine, up to 1 in 4 known pregnancies end in miscarriage. A quarter of our population has been affected by pregnancy loss, so why make it such a prominent part of House of the Dragon?

Game of Thrones faced similar backlash with its frequent portrayal of non-consensual sex scenes. Many fans argued this glorified something that is often incredibly traumatic and was also triggering for anyone who’d experienced it themselves. Ahead of House of the Dragon’s premiere, the showrunner

House of the Dragon essentially replaces non-consensual sex with graphic and brutal birthing scenes. It’s worth pointing out that of the four labor scenes in House of the Dragon, only one child (Rhaenyra’s son Joffrey) actually survives. The loss of a child is one of the most heartbreaking things any parent can experience. Using it to make a scene edgier is a mistake.

It’s no coincidence that sexual assault and intense childbirth both happen mainly (though not exclusively) to women. It says a lot that those in power think gendered violence, whether malevolent or just a gruesome medical event, is a thematic element that brings back Aemma’s original statement. The Game of Thrones universe may be known for its no-holds-barred violence, but maybe, in this case, some holds should have been barred.