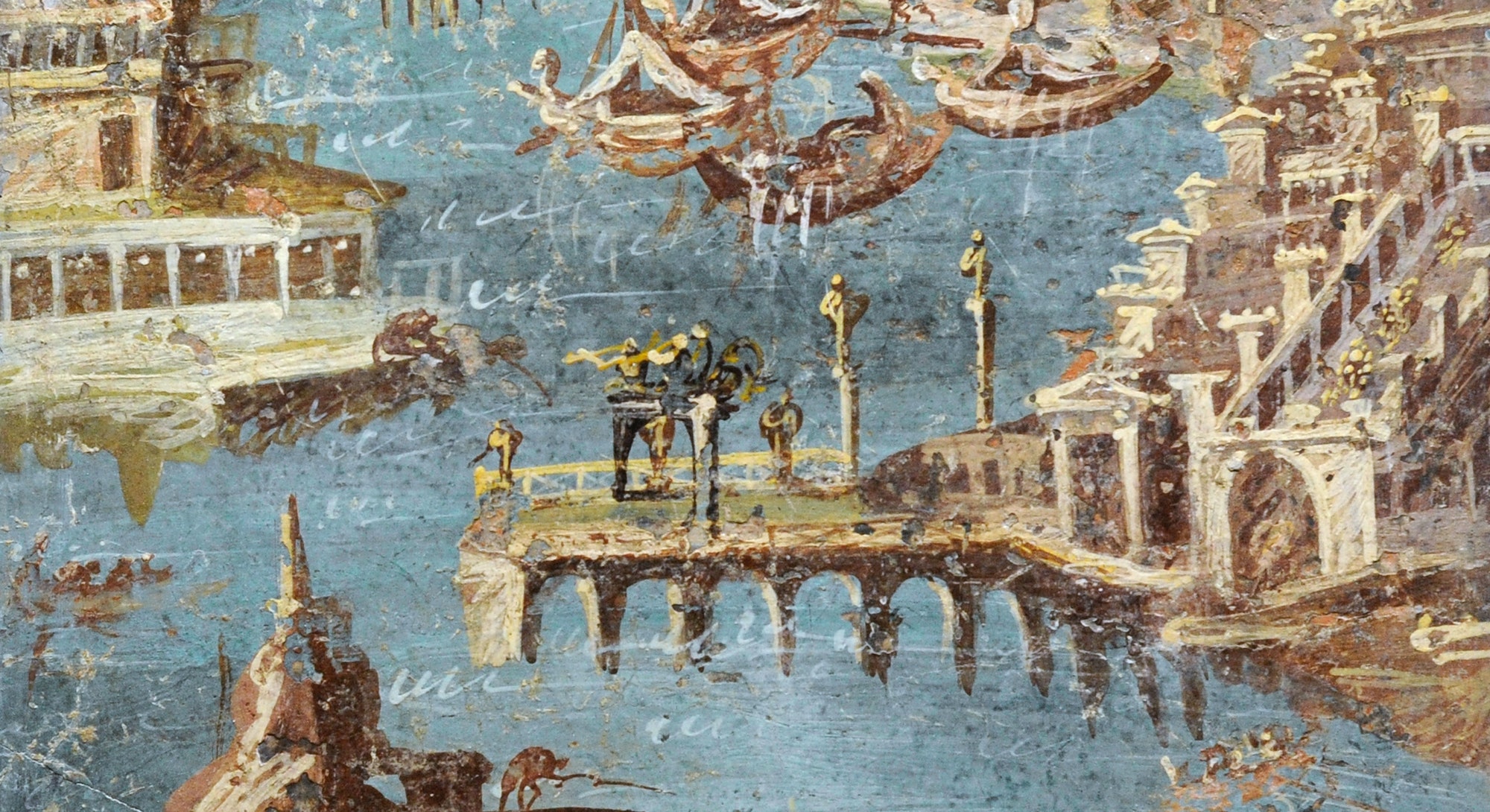 Herculaneum was a seaside getaway for Rome’s decadent crowd, evidenced by the abundant use of colored marble inside its stately houses and the bright frescos covering the walls of the luxurious villas. Then, one day, the entire town died.

When they were alive, the people of this affluent town of 5,000 had a diet that would make any sensible person drool. For starters, they ate an incredible amount of fresh fish and olive oil, far more than current-day adherents of a modern Mediterranean diet.

Scientists recently learned how these ancient Italians filled their bellies through a little bone analysis. The findings offer fresh insights into the origins of some of the most iconic Italian dishes, like scialatielli ai frutti di mare, which is fresh pasta with shrimp or clams. It’s a dish that’s still served on the Amalfi Coast today.

The discovery — A study published in August in the journal Science Advances describes how archaeologists looked inside the bones of the ancient peoples of Herculaneum, using a method called Longin collagen extraction. The researchers then determined the stable isotope values of amino acids from that bone collagen. They used statistical models that incorporate knowledge of protein synthesis to figure out just how much fish a Herculaneum man ate. (Bone collagen can tell you what a person ate when they were alive, thanks to chemical signatures in the collagen.)

The bones are safely stored for preservation and out of respect for people who, as you might have guessed by now, perished during the eruption of the volcano Mount Vesuvius in 79 A.D.

The scientists sampled the rib-bone collagen of 11 adult males and 6 adult females and found signatures of carbon and nitrogen — these are primarily derived from food eaten in the years before the bone is preserved.

Curiously, the men showed greater levels of seafood-derived chemicals in their bones.

“The men were consuming 50 percent more marine protein from fish compared to women,” Silvia Soncin, an archaeologist at the University of Rome, tells Inverse. Soncin was part of the team that made the discovery. Women ate more meat, eggs, and dairy than men.

“Even if you see this difference between men and women, the quantity of marine fish that the women were eating is much higher than the fish that overall as a population we eat today,” Soncin says.

A separate excavation done on a Herculaneum sewer hints at what types of marine food the people there ate, so modern curious eaters can more accurately sample ancient cuisine. Shellfish, eels, and bony fish like anchovies were all on the menu in 79 A.D.

Soncin hopes antiquity historians can flesh out why men ate more seafood than women. One idea is that men did more fishing. Still, Ancient Romans’ seafood consumption outmatches that of modern middle-class Italian families, which Soncin says is usually about three times a week.

HOW TO VISIT HERCULANEUM

Once in Naples, catch a short, 30 minute-or-so long train ride from the Naples station Salerno to Pompei. From the Pompei station, it is a 15-minute meander to the ruins of the ancient city of Pompeii themselves.

Starting at Pompeii means you can visit Herculaneum on the way back to your home base in Naples. Catch a tram from Pompei Scavi station to Ercolano Scavi station — a breezy 20-minute ride. The tram continues into the city, so just hop back on when you are done.

Travelers can then spend a day or two checking out gastronomic gems in Naples — it is the home of pizza, after all — or on the islands of Ischia and Capri before taking a local train to their archaeological destination of choice.

How to explore Herculaneum

Travelers can zip between the ruins of Pompeii, Herculaneum, and neighboring Torre on this iconic stretch coastline thanks to the robust local transportation system. Herculaneum itself takes a few hours to tour in its entirety on foot, and you can even go with an archaeologist to guide you.

The Parco Archeologico di Ercolano, or the Herculaneum Archaeological Park, is smaller than nearby Pompeii, but it is also perhaps more resonant with today’s travelers seeking to relax at these cerulean shores.

Herculaneum, once the Roman resort town, still offers some of that same comfort 1,942 years later.

Today, this UNESCO World Heritage Center is open to the public. In fact, Herculaneum may have been the world’s first open-air museum, according to UNESCO. The organization points to several “opulent” landmarks you need to see today:

“In Herculaneum several impressive public buildings are well preserved, including a spacious palaestra accessed through a monumental gateway, two sets of public baths, one of which (Central Thermae) is monumental and vividly decorated, the College of the Priests of Augustus, and a theatre of standard form. The Villa of the Papyri, outside the city walls, is an opulent establishment. The town is also noteworthy for the completeness of its shops, still containing equipment such as enormous wine jars.”

The spring and autumn months are the best time to visit the Campania region of Italy. The mid-summer months can be unbearably hot. You are also less likely to run into hordes of summer holidaymakers, giving you a clearer view of the incredible remains at the Herculaneum site (and more space at the restaurant tables).

Why science tourists should visit Herculaneum

Learning what was once inside someone’s gut can reveal loads about the society and environment at large, making research like this important for illustrating the past.

A trip here is a chance to strip away notions about Italian cuisine.

Let’s start with a first-century A.D. classic dish: puls. This thick stew is made of grains, often mixed with vegetables, just a little meat, and cheese.

For those looking to avoid stew, go to a local eatery and order sea bream —a tasty, medium-sized, white fish. Adventure-seekers might also sample sea urchin, a spiny creature with yolk-colored, unctuous insides that are enjoyed worldwide.

Charred loaves of bread have been recovered from Pompeii and Herculaneum. The British Museum even has a video where chef Giorgio Locatelli accepts the challenge of recreating the bun at home, and you can too. Although be warned these loaves are a little unlike the usual supermarket bakery offerings of baguettes, country loaves, or ciabatta. Rather, these sourdough loaves were rather flat, thick disks could be made from wheat, bran, millet, buckwheat, or spelt flour — or even a combination of grains, as Locatelli uses in his interpretation.

The loaves were also scored into tear-off sections and then stamped with special seals. These stamps told the buyer where the loaf came from, like modern plastic and paper packaging does today. It could also function as a mark of quality — a stamp from a renowned bakery was a sign of prestige, just like an artisanal sourdough in fancy paper packaging is today.

To keep your meal as authentic as possible, ditch the pasta and try shucking your clams yourself as chef Lidia Bastianich does in this video to create a clam sauce for a sea-inspired bruschetta. Adding ingredients native to the region, like parsley and red onions, will add an extra flavor dimension to your dish.

Other key ingredients, like fava beans and goat cheese, are also available at many markets closer to home.

Preserved fish is another option, so dig out the canned sardines and transport yourself to the coast by tastebud. Both preserved and fresh fish were likely on board a trade ship dated to about the same time period — the wreckage was discovered near Grado, Italy. Ancient people loved their seafood so much that scientists think they built hydrologic tanks on their boats to carry fresh fish to new places and keep them alive through the journey.

CENTURION RATING: 🏛🏛🏛🏛🏛🏛🏛🏛🏛/10. A delicious nine classical buildings out of ten. In other words, we definitely think you should visit the hipster’s Pompeii, the ancient ruins of Herculaneum. The hottest resort town of Ancient Rome.

WORLDVIEW is an Inverse travel series that uncovers hidden history.