“I have summoned you here because your universes are about to die.” 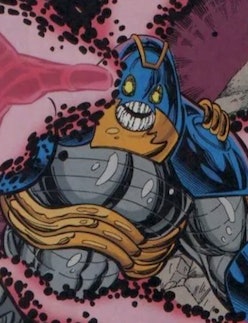 DC’s marketing for the original Crisis on Infinite Earths promised a lot ahead of the comic’s 1985 debut.

“Worlds will live. Worlds will die. And the DC Universe will never be the same!” ads declared, almost daring cynical fans to dismiss them as hyperbole. But how could you? Images of superheroes spinning through space in front of a backdrop of multiple Earths (one of which was beset by weird cosmic energy) filled the ad space of DC comics. The hype was palpable.

And for once, the crossover lived up to the hype, changing DC’s comics universe — and superheroes themselves — in ways that still reverberate 37 years later.

The series was certainly ambitious. At once a 50th-anniversary celebration of DC Comics and an attempt to redefine and relaunch the publisher for the next half-century, Crisis had been teased for years by the appearances of a couple of mysterious characters across almost the entire DC line. The Monitor debuted way back in 1982’s The New Teen Titans #21 (that’s how long writer Marv Wolfman and artist George Perez had been actively planning the series). But the story’s roots stretched back all the way to DC’s first crisis, back in 1963’s Justice League of America #21, titled “Crisis on Earth-One!”

That comic was the first in a series of annual Justice League stories teaming the supergroup up with their WWII-era counterparts, the Justice Society of America. Each installment would invariably introduce even more super characters from yet another parallel Earth – the Crime Syndicate of Earth-3, the Freedom Fighters from Earth-X, the Shazam family from Earth-S, and so on – with a title including the word “crisis” to ensure readers knew just how calamitous events had become. But a crisis on infinite Earths? Just imagine!

“The DC Universe will never be the same”

Crisis immediately shows that it means business. After a one-page recap about the origin of existence itself — a detail that would become surprisingly relevant later on, but instantly heralds the new series’ gravitas — the first issue opens with a seven-page sequence destroying Earth-3, a staple in DC mythology for almost a quarter of a century by that point. From there, the Monitor’s assistant Harbinger travels across the multiverse to gather a group of heroes who are told, in blunt terms, by the never-subtle Monitor.

“I have summoned you here because your universes are about to die!” The caption at the end of the issue underscores the stakes. “This is only the beginning!” it breathlessly announces. “Next: From the dawn of man to the Great Disaster! Crisis on Infinite Earths - The DC Universe will never be the same!”

The Monitor knew what he was talking about. He would be revealed to be the positive-matter duplicate of the Anti-Monitor, a cosmic being attempting to destroy all creation after being awoken by the experiments of a super-scientist called Pariah from yet another parallel Earth. Gathering together heroes from what remained of the multiverse, he sought to stop the Anti-Monitor in his tracks, but – of course – things weren’t that simple. The Anti-Monitor was well aware of what was going on and had prepared counter-measures that would guarantee his success… and kill the Monitor in the process.

“Th-there’s hope. There is always hope.”

Across its 12-issue run, Crisis delivered shock after shock for an audience that believed they knew what to expect from DC. Worlds did indeed die, as promised. In fact, the entire DC multiverse as it had existed to that point died after a trip back to the origin of reality ended in a cosmic wrestling match. (That only sounds like a joke.) The only world that lived, in the end, was an all-new version of DC’s Earth that stood alone when the multiverse-that-was collapsed into nothingness.

This new universe was of course filled with characters from all manner of previous alternate worlds. History itself had been rewritten, with all of DC’s heroic line-up finding their backstories subject to reboots years before the term became well-known.

Well, not all of DC’s heroes. Some simply didn’t make it out of Crisis on Infinite Earths alive, with the casualty list including some surprisingly high-profile names. Both the Flash and Supergirl sacrificed themselves for the good of creation, although new versions of both would arrive before too long. (Kid Flash even steps up to become the new Flash by the end of the series, while Supergirl’s replacement was a couple of years away.) The original World War II versions of some of DC’s biggest heroes either retired into a literal limbo or were simply erased from existence. (The original Batman of Earth-2 avoided all of this, having died back in 1979’s Adventure Comics #462, luckily.)

By the time the dust settled at the end of Crisis on Infinite Earths #12 – following a final showdown with the Anti-Monitor, who’d survived his apparent death two issues earlier – DC’s comic book universe was a distinctly different place than it had been just a year earlier. Wolfman underscored the change by having Psycho-Pirate, a henchman of the Anti-Monitor, push the boundaries of the fourth wall by telling the reader, “I mean, nothing’s ever certain anymore. Nothing’s ever predictable like it used to be. These days… y-you just never know who’s going to die… and who’s going to live.”

The lasting influence of Crisis

What still makes Crisis on Infinite Earths a pivotal comic nearly four decades after its release is, in part, that it demonstrates what’s possible when a publisher goes all-in on a storyline. Crisis wasn’t just the first comic book story of its kind in terms of ambition – again, it dumped the existing status quo of the DCU in favor of something streamlined and new – but also in terms of its publishing footprint. The storyline spread across 40 issues of the larger DC line, each branded with the Crisis logo. It’s the first example of the “event comic” model that both Marvel and DC have made a regular part of their publishing plans ever since.

Unlike modern events like Marvel’s War of the Realms or King in Black, though, Crisis on Infinite Earths fully delivered on a scale few dared imagine. It really did change everything, opening DC up to projects like Frank Miller and David Mazzucchelli’s Batman: Year One and George Perez’s Wonder Woman reboot, which would influence the onscreen version of the character years after the fact. (It should be noted, as well, that Crisis itself was adapted in an altered form as a crossover between the various DC shows on the CW back in 2019.)

Perhaps the truest cinematic legacy of the comic book Crisis isn’t actually an official Crisis on Infinite Earths adaptation at all, but Marvel Studios’ 2018-2019 twofer Avengers: Infinity War and Avengers: Endgame. Not only is the two-part conclusion to Marvel’s onscreen Thanos saga, a story years in the making just as Crisis was, but its determination to bring as many characters as possible into the story echoes exactly what DC’s first big event was aiming for.

Both the Infinity War/Endgame twosome and Crisis aim to overwhelm fans with an everything-and-the-kitchen-sink approach that delivers everything they wanted — and so much more – while simultaneously reshaping their fictional universes into new status quos to be explored and exploited moving forwards. There’s so much of Crisis’ DNA in what Marvel Studios and the Russo Brothers delivered across those two films that it’s difficult to imagine them existing without Marv Wolfman and George Perez’s comic book efforts more than three decades earlier.

Even if all Crisis on Infinite Earths did was give George Perez the chance to draw breathtaking pages of non-stop superhero action that would make other artists drop from exhaustion, it would be worth celebrating. (Seriously, the art on Crisis is some of the best that the genre has ever seen, or is likely to, with the title firmly and permanently confirming Perez’s status as a comic artist unlike any other.) It did much more than that, though, becoming a true testament to the potent combination of a creative team looking to shake things up in a big way and a publisher willing to follow them – and, more importantly, back them up – at every step.

Worlds lived – well, a world, at least. Worlds certainly died. And, most importantly, the DC Universe hasn’t been the same in the almost-half-century since. What else could anybody want?