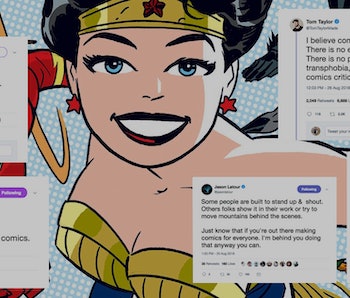 You would be forgiven for thinking a scandal named “Comicsgate” meant Tony Stark bugged the offices Bruce Wayne. But the reality of Comicsgate, a naked pushback against progressivism and diversity in comic books, is infinitely worse. This past weekend, the year-long episode came to a head when pros from Marvel, DC, and beyond expressed solidarity against Comicsgate, which recently spiraled into harassment against Marsha Cooke, the widow of the late writer and illustrator Darwyn Cooke.

While there is a strong “What took everyone so long?” counterpoint in regards to Comicsgate and those who harass people on its behalf, the deafening expression of solitude by most of the industry’s biggest pros is a major development that may influence the direction of the industry.

On Sunday, Tom Taylor, whose writing credits include DC’s Injustice, last year’s Justice League/Power Rangers, and creator of the Netflix series The Deep, shared on Twitter what became a credo against Comicsgate for others to share.

“I believe comics are for everyone,” Taylor commented on Twitter. “There is no excuse for harassment. There is no place for homophobia, transphobia, racism or misogyny in comics criticism.”

Though Taylor doesn’t mention “Comicsgate” by name, the context his tweet came from is unmistakable.

Last week, on August 21, Marsha Cooke returned to social media after two years to speak out against pro-Comicsgate individuals who shared a 2010 video interview of her late husband, Darwyn Cooke (DC: The New Frontier), in which the writer/illustrator seemingly opposes lesbian characters in comic books.

In the interview, Cooke said, “I don’t wanna see characters who have been straight for 60 years become lesbian overnight because the creators are too stupid to come up with something decent.”

Darwyn’s words sound harsh, but Marsha Cooke (@Nicest_Girl_Evr) clarified that he meant “retroactively changing … sexuality for sales promotion.” (Cooke was effectively against queerbaiting, in which producers advertise LGBTQ+ characters but underdeliver in the final story.) She added that that her husband “regretted” the “ambush interview” and that his point “was to create new characters, including gay ones.” (It’s something that also happened recently with Voltron’.

In other tweets, Cooke argues that her husband championed diversity and that he “hated misogyny, homophobia and racism.”

As pro-Comicsgate individuals came at Marsha Cooke, whom she called “manbabies,” the rest of the industry finally took real notice. And with Taylor’s credo, many demonstrated how diverse and progressively political the medium has always been. But Comicsgate has been active for more than a year, and the majority of pros haven’t spoken up with this volume until now.

Like GamerGate, Comicsgate — chiefly centered around figures like Richard C. Meyer (spotlighted in a segment of The Jim Jeffries Show in July) and ex-DC illustrator Ethan Van Sciver — is a “movement,” which many are calling a hate group, characterized by frustrated, mostly white, male conservative readers speaking out against diversity and “SJWs” (“social justice warriors”) both on the comic book page and behind the scenes at all the major publishers.

Unlike GamerGate, or any “-gate”, there were no scandals or wrongdoing. (Neither was GamerGate, for that matter.) Spurred by a mundane tweet where Marvel employees got themselves milkshakes, Comicsgate has become a visible, sometimes disturbing display against progressive ideas in comic books.

Constructive, helpful comic book criticism is one thing; jamming a knife through an issue of West Coast Avengers because it is “hipster trash” is another thing entirely.

As comic book movies rake in big bucks at the box office, popular culture has never been more ready for diverse stories and characters from the uniquely American medium. However, the relatively low sales of monthly comics is incongruous to the sky-high sales of movie tickets, indicating a readership in stasis (though monthly sales figures don’t count for other sales like digital and trade paperback releases).

Comicsgate often blames the low readership on “forced” diversity, and further push back against such efforts from the Big Two. Pretty much everyone else agrees the industry is just different than it was in 1993 when Jim Lee’s X-Men sold millions of copies, a level of success never repeated in the industry.

With Comicsgate no longer the elephant in the room, you can expect creators to champion racial, gender, and sexual diversity in their books even more than they are already doing now. Veteran readers will know this is nothing new; Superman has rebuked racism since 1949. Maybe some things shouldn’t change.

More like this
Culture
6.29.2022 10:00 AM
6 years ago, Marvel released its most incoherent sequel ever
By Graeme McMillan
Entertainment
6.29.2022 4:01 PM
Harley Quinn Season 3 could fix a major Batman controversy, trailer hints
By Eric Francisco
Entertainment
6.27.2022 1:30 PM
17 years ago, DC copied Marvel — and told the worst Batman story ever
By Richard Newby
Related Tags
Share: