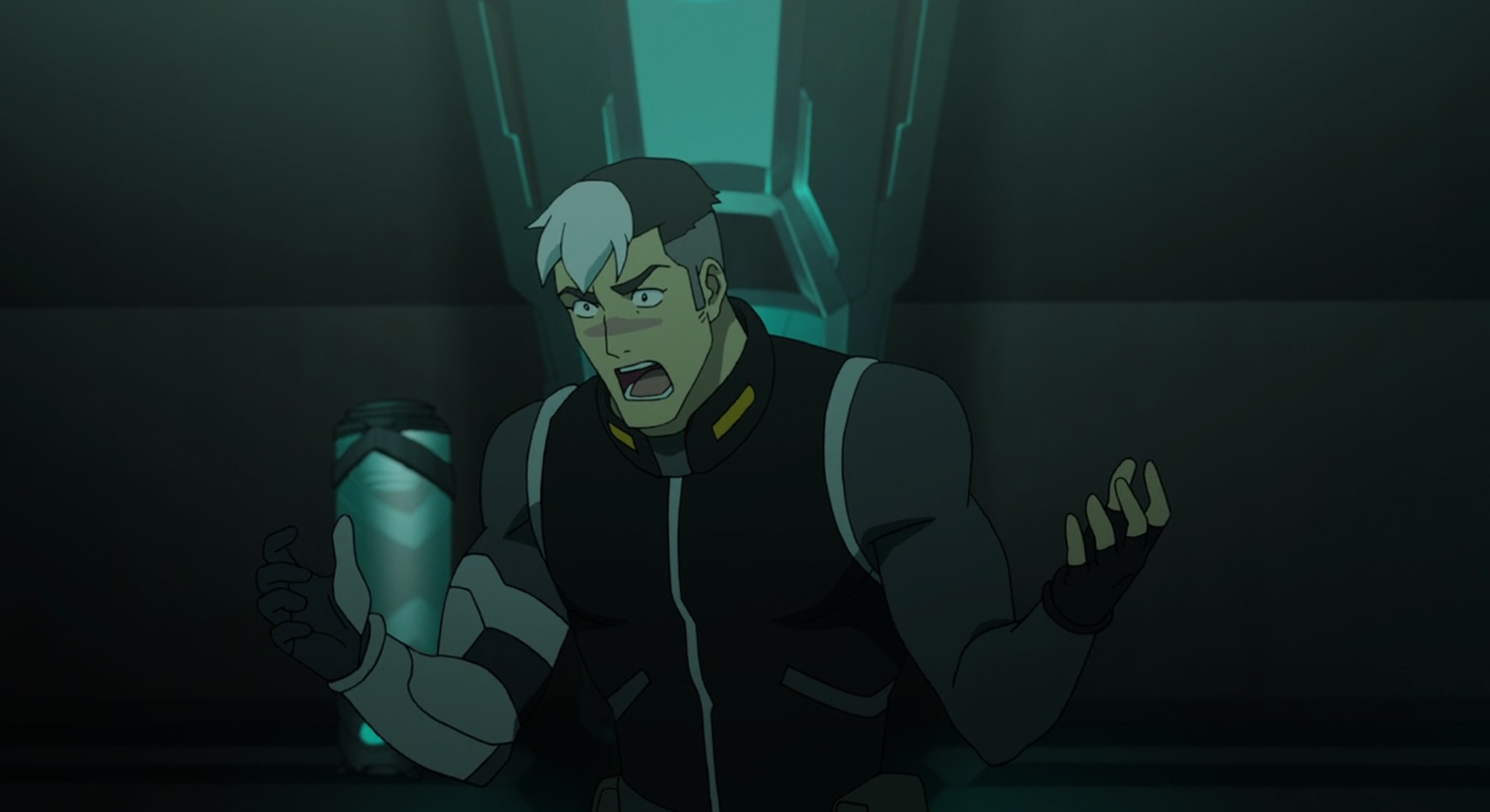 I’m way behind in my Voltron watching. I’ve been meaning to catch up but life and other fandoms happened (My Hero Academia owns my soul). From the few episodes I have seen, I can understand why this series has as big of a fanbase as it does — it’s a fun, engaging, well-animated series. Still, I lost track of time, and suddenly there was a Season 7 when I hadn’t even finished the first one.

You… hear things, though.

While no fandom will ever agree on things like “best ship” or “best boy,” there is a sentiment that the entire Voltron fandom seems to share: Shiro is space dad. Period. He’s everyone’s precious cinnamon roll — are the kids still saying that? Again, I lose track. Flavor of dessert pastry aside, Shiro is a huge deal, and that’s vital to keep in mind when tackling what happened last month at San Diego Comic Con, which would lead to the season that launched a thousand angry fans — OK, more than a thousand, waaay more than a thousand.

During the Voltron panel it was revealed that Shiro is gay. Not only that, but in the upcoming season, you’d meet Adam, his significant other. Fans rejoiced. Skin was cleared. Space crops were watered. Adam was killed.

It didn’t take long to hear the swift WTF that echoed through the cosmos when Netflix’s animated darling released its 7th season. Turns out Adam and Shiro had broken up before Shiro left Earth, oh, and Adam was killed in battle afterwards while Shiro was gone. Shiro and Adam are reunited via Shiro brushing his fingers against his memorial at the end of the season.

Needless to say, this didn’t sit well with fans. Accusations of queerbaiting and that crusty-ass bury your gays trope echoed around the fandom courtroom louder than a trial in a Phoenix Wright game. Some felt that wasn’t the case, that the creators never explicitly stated how we’d meet Adam, that it was a good showing of the hardship of war (even if Shiro has been through hell already), and that fans were projecting their own ideas onto the plot. Showrunner Joaquim Dos Santos has since written up an apology. It goes into the intent to create an inclusive series, hints at possible restrictions faced, discusses that trope I mentioned, and reveals the hope of Shiro being a character who breaks the stereotypical “hardened soldier” image.

I don’t have much to weigh in on the show itself. I’m just a black, queer, geeky gal who’s always ready for more representation. But there is something I’d like to add to the conversation of not just Voltron, but queer representation as a whole.

Mainstream creators. Please. Stop outing your characters ahead of time. It falls flat if you don’t develop them in your work, making your pre-emptive outing feel insincere or, worse, manipulative.

Let me tell you a tale as old as time, because Voltron is not the first. Let’s talk about 2017’s Beauty and the Beast. I am a huge fan of the animated version but was kinda lukewarm about a live action adaptation. Still, I paid attention to the news about it, and before the release headlines appeared that boasted about Disney’s first openly gay character — not to be confused with the upcoming Jungle Cruise. Fans immediately reacted, which is to be expected when you say words like first and gay to an audience craving representation. Let’s just say that most were… perturbed… because of who Lefou is (the fool).

Those irritated feelings curdled into something furious with what they were given: a “blink and you’ll miss it” scene at the end of the movie. Actually, any potential queer moment can be easily written off as a gag. “You can do better than him,” Mrs. Potts says to Lefou during the castle raid. Are we meant to take that as a one-sided crush on the villain, or a disgruntled sidekick who’s tired of being pushed around? I suppose it’s up for audience interpretation… or rather, it would be had the director not outed Lefou beforehand.

But he did, and that left us saying, “Wait… that’s our representation?!”

Look. I get it. Representation is a big deal so you wanna reassure your fans that you hear them. But this need to preemptively say it? That’s not helping anyone. Because by stating it beforehand, you’re (unknowingly) telling fans that this character being queer is gonna be important to the story. You’re gonna explore it. You’re gonna develop it. It’s not gonna be an afterthought, otherwise, why would you even bring it up? Unless, of course, you’re telling us because it’s not visible in the work — hashtag Dumbledore.

I’m not saying fans wouldn’t have been burned by this Adam news had they gone in without knowing about his relationship with Shiro. But with it being announced in advanced? That made that burn worse. “You’ll get to meet Adam,” they said. Great. Um. The font on his plaque sure is… nice? See, it’s not just about Shiro losing Adam, it’s about Adam being treated as a disposable plot device. Sure, there’s another season coming, and time to explore Shiro’s sexuality, because queerness isn’t simply defined by romance.

But… what about Adam?

They took the time to tell us about him. They raised this queer character’s value by telling us we’d meet him. Did they tell us how we’d meet him? No. But by opening the proverbial can of worms pre-season, it felt like he’d be a key part of the story beyond “love interest solely here to further someone else’s plot via breakup and death.”

So the question becomes, what should mainstream creators do? When they’re doing press interviews, hosting giant panels, and tweeting to thousands upon thousands of fans, what should they do?

Simple: Let the story do the outing.

Telling us about these characters before we get to meet them is only part of the problem, because it’d be fine if we actually got that well developed queer character we were hoping for. As it stands, there’s a track record for mediocrity when creators open the closet door before we even get to look at it. The reason why fans praise Steven Universe, for example, is because the queerness isn’t just coming from the creator’s mouth. It’s in the story. The reason why we all lost our collective minds over Yuri on Ice is because the characters were fleshed out — both separately and together.

Who knew Ruby and Sapphire would have a wedding? Who knew Yuri would get him and Victor matching rings? No one, because the creators didn’t out them, they let the story do it for them.