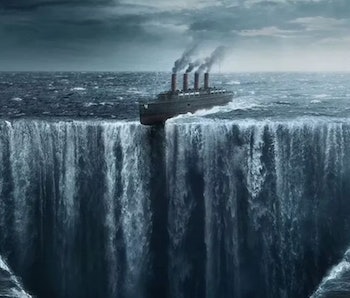 Understanding why Netflix cancels some shows and renews others can feel like trying to predict the weather from under your blanket. A new show might climb the ranks of Netflix’s very public Top 10 rankings, stay there for weeks, and still wind up on the garbage heap. However, there’s a secret metric Netflix doesn’t reveal that helps explain exactly why a show like 1899 got canceled — and it may prove that Netflix’s biggest critics are right about one particular issue.

As Forbes pointed out in a recent article, the easiest way to predict whether a Netflix show will be renewed or canceled is to look at its completion rate (aka, what percentage of people who watched a show actually finished it). If the completion rate is over 50 percent, the show gets renewed. If it’s under 50 percent... well, you can guess what happens then.

Netflix doesn’t share this info with the public, but according to data analytics company Digital i (via What’s On Netflix), 1899’s completion rate was just 32 percent. If you’re interested in digging into the data, Forbes also has a breakdown of some other recent shows and their completion rates:

The problem with completion rates

Netflix’s strategy here kind of makes sense. After all, even if a show seems popular, why bother paying for a second season if no one actually finished the first one? A lot of people may have checked out 1899, but less than a third of them soldiered through it. So only that 32 percent of people will return for Season 2, right?

Not exactly. Some of the most successful TV shows of all time took several seasons to hit their stride and find a mainstream audience. The Office and Parks and Rec both struggled to find the right dynamic in early seasons, but after some tweaking, they became two of the most successful sitcoms ever (and helped fuel early Netflix growth before NBC reclaimed the shows for its own streaming service, Peacock).

The same goes for Breaking Bad, one of the shining stars of the golden age of television. While the AMC series was an early hit with critics, it took years for a larger audience to tune in. And when they did, it was partly because Netflix made it easy to catch up.

Netflix’s current strategy ensures the streamer will never have a Breaking Bad or an Office of its own. Not every great TV show becomes a hit overnight. It takes time, word of mouth, and the ability for audiences to catch up. Netflix should be able to make that happen, but it’s making shortsighted decisions instead.

I’m not saying that 1899 would have been the next Breaking Bad (or the next Lost), but now we’ll never know. And I can’t help but wonder how many other Netflix shows were struck down before they could achieve greatness, all because of a few measly percentage points.

More like this
Culture
Feb. 2, 2023
Buck Rogers in the 25th Century’s Most Baffling Change Also Gave Us Its Best Character
By Ryan Britt
Entertainment
Jan. 30, 2023
Doctor Who Could Become the New Marvel — But There's a Catch
By Ryan Britt
Entertainment
Jan. 28, 2023
Last of Us Episode 3 release date, time, and trailer for HBO's zombie show
By Claire Fox
LEARN SOMETHING NEW EVERY DAY.
Related Tags
Share: