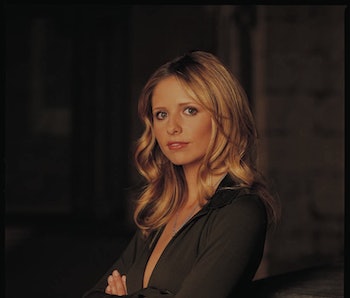 Fifteen years after the pivotal fifth season of Buffy the Vampire Slayer aired, history is comfortable saying: Buffy got robbed. The Emmys and Golden Globes barely noticed the show in its day — it’s not the egregious oversight of snubbing The Wire but it’s in the same ballpark. Critics were slow to recognize the genius in real time, but the culture is catching onto the innovations that Sarah Michelle Gellar and Joss Whedon were offering in the early aughts.

It’s no accident that genre larks like Game of Thrones and Jessica Jones have become the new prestige TV. Basically you can trace your Netflix and Chill routine to the WTF fifth season of Buffy. Its fresh storytelling moves may actually live forever.

In the Season 5 premiere, we got to meet Buffy’s sister Dawn — this after Buffy had been an only child for the first, oh, 78 episodes of the series. Dawn was one of the biggest WTFs to ever happen on TV: You can’t just add in a random character and pretend she’s been there the whole time! Today, many long-running shows abuse this move. As their seasons pile up, they want to shake up (or replace) the cast. Yet the writers haven’t planned ahead. The solution is usually to wave hello to some stranger the main cast members allegedly knew long ago — now she’s back! You remember good old so-and-so, guys, right? Remember all those memories? Weird that we never talked about her for the past five years, but, whoa, it’s all coming back to us now.

With the introduction of Dawn, showrunner Joss Whedon poked fun at this concept in the ballsiest way possible by giving Buffy a sister who’s totally been there the whole time. All the characters act like her presence is normal, leaving viewers wondering if it’s some elaborate joke or they seriously missed something. It worked because it was so brazen, and because Whedon clearly planned ahead with foreshadowing. He smartly wove her into the season’s central mystery, making Dawn simultaneously a new character and a meta-commentary on the silliness of introducing new characters. Whedon is a man of no half measures. Since then, most respectable shows have cut back on the trend of “that new character everyone’s known the whole time.”

Warning: do not watch if you’re in a place where it would be awkward to burst into tears.

“The Body” is the best episode of television you can never watch again. Seriously, it will ruin you even more than Game of Thrones’ “The Rains of Castamere.” But unlike Game of Thrones, the death in question isn’t a central character: With some notable exceptions (Season 3’s “Band Candy”), Joyce Summers has been on the outskirts. Buffy’s mom wasn’t a vital character, yet her death — sudden, from a brain aneurysm, on a couch where Buffy discovers her body — felt devastating because of the way the episode progresses: the realism of the grief (Buffy’s heartbreaking, vulnerable “Mommy?”); the quiet moments; the character’s reactions; the very fact that, on a supernatural show, she dies of natural causes and nothing supernatural happens in the forefront of episode. The focus is on what it’s like to lose a figure whose background presence you took for granted.

It’s a gut-punch of an episode and there’s a reason it’s still discussed today — because no show has come close to exploring death so accurately (with the possible exception of Six Feet Under). Anya’s speech about the senselessness of death remains one of the best TV monologues of all time.

These days any respectable non-Nickelodeon show will give you some decent same-sex makeout sesh: How to Get Away With Murder, Game of Thrones, Black Sails, American Horror Story, Glee. But none of that would be so nonchalantly ubiquitous today without Willow and Tara paving the way as TV’s first lesbian couple with protagonist-prominence. Their first kiss happens not as a titillating girl-on-girl setpiece but as a quiet and very human moment of comfort in “The Body.” It was a perfect Big Deal moment that supported, rather than overwhelmed, the real emotions the show was generating.

Exploring the grey areas of sex, relationships, and hookup culture is all the rage now: Master of None, You’re the Worst, Casual. No longer is happily-ever-after the go-to narrative, nor are “normal” relationships dominating TV as much. Once again, we look to Buffy, whose WTF relationship with Spike — her enemy turned unwilling ally turned dysfunctional fuck-buddy — expanded the boundaries of TV romance.

Although their romance unfolds mostly over Season 6, Season 5 lays its foundation in their push-pull dynamic and uneasy camaraderie; in his attraction and her cruel dismissal (most notably in “Fool For Love” and “Crush”). At times it’s hard to watch, but it’s never less than honest. Even if, like Sarah Michelle Gellar herself, you misguidedly pick Angel over Spike, you’ve got to admit that Buffy and Spike are more interesting. As Tolstoy said, all happy couples are alike; each unhappy couple is unhappy in its own way. No one will ever make each other unhappy quite in the ways Buffy and Spike devised.

Shows last year really, really liked axing (or fake-out axing) their protagonists. To name just a few: The Walking Dead’s Glenn, Game of Thrones’ Jon Snow, The Leftovers’ Kevin Garvey, Penny Dreadful’s Sembene, and True Detective’s cops whose names we didn’t bother to learn because it was terrible. But guess who did it first?

Season 5 of Buffy ended with Buffy dying in an affecting, shocking self-sacrifice, complete with a headstone that read, “She saved the world. A lot.” And although Joss Whedon made it clear he wasn’t yanking audiences around with an “is she or isn’t she,” it was no less emotionally rich. The fact that Willow winds up resurrecting Buffy to start Season 6 didn’t take the sting out of the death itself.

Like most things on Buffy, a show wildly ahead of its time, it’s a lesson that storytellers today could stand to learn.