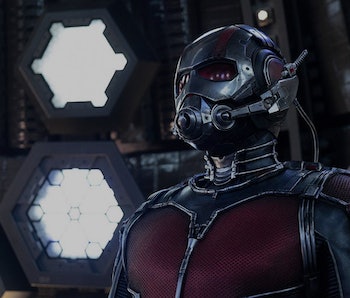 It’s hard to believe that people were skeptical that Ant-Man might not get a sequel. Based on pure numbers it’s the third-lowest-grossing Marvel movie, just a tad in front of Captain America: The First Avenger and The Incredible Hulk. Whereas Cap became an anchor of the entire Marvel movie series, Hulk had to be reinvented in the Avengers movies and still doesn’t have a standalone sequel. Ant-Man seemed to be heading that way, but before he could shrink away, Ant-Man and the Wasp was announced with a 2018 release date — the Marvel Cinematic Universe plays by its own rules. Besides his own announced sequel, the minuscule hero will pop up again in the Phase Three-starter Captain America: Civil War in 2016. So what will Ant-Man’s role be? The guess here is: small.

Ant-Man seemed primed as a MCU movie cut off from the primary Avenger mythos despite the fact that the comics character was a founding member of the band of heroes. Like the Guardians of the Galaxy, he seemed too weird, and his character’s comedic bent strayed too far from the quippy, action-focused adventures of other Marvel heroes like Iron Man or Thor. But when the movie hit theaters it was very much in the MCU mold, with the Tony Stark-esque Hank Pym (played by Michael Douglas) forced out of his own technology company as well as S.H.I.E.L.D.

On top of that, Ant-Man himself, Scott Lang, was tasked by Pym to break into the Avengers’ headquarters in the middle of the movie and had to battle with a recognizable face: Falcon, played by Anthony Mackie. It was a short, humorous scene that eased Lang into the shared universe without both characters intruding too much into either main storyline. The best part is it made sense for the Ant-Man character. His shrinking abilities are goofy, but so is a lot of the serious-minded technology used by Falcon, or the Super Soldier Serum that birthed Captain America. Just like that, Ant-Man was a plausible part of the MCU.

While Ant-Man was through with the Avengers at that point in the movie, the Avengers weren’t through with him. Michael Pena’s character, Luis, ends the movie telling Lang that Falcon, a.k.a. Sam Wilson, is looking for him. Then in the movie’s patented Marvel post-credit sequence, Wilson shows up with Captain America in a dank basement to break out Cap’s captive, formerly brainwashed friend Bucky Barnes, a.k.a. the Winter Soldier. Cap and Falcon argue about how they’re going to actually get Bucky out, and briefly consider calling Tony Stark to get the job done.

“Who knows if the Accords will let him help,” Falcon says, referring to the Sokovia Accords, the legislation that serves as the inciting incident of the titular civil war that forces superheroes to register against their will. “We’re on our own,” Cap replies, to which Falcon says, “I know a guy.” Enter: Ant-Man.

Besides a comedy, Ant-Man was essentially a heist movie. It always has been. Feige even said so in a 2013 interview, when Edgar Wright was still attached to the less-than-pint-sized hero’s first big-screen outing. In Civil War, Cap and Falcon obviously have someone they’d like to spring from imprisonment, essentially stealing the Winter Soldier for themselves. It doesn’t take a seasoned screenwriter to see where this is going.

The pair will most likely enlist Ant-Man to pop in to the already hero-heavy movie and break Bucky out. Lang will probably then leave just as quickly as Falcon did in the Ant-Man movie.

This brief stint on Captain America’s side during Marvel’s Civil War will give fans of Ant-Man what they want, and then give him a few years off. He may pop up again in Part 1 of Avengers: Infinity War in May 2018 right before his own sequel drops in July of that year, but that might cut it too close. Expect him to possibly pop up in Infinity War - Part 2 in 2019 with a three-quel to follow. But as of right now it seems the little guy will have little to do in Civil War other than to advance the plot enough to help Cap and Iron Man to square off. Hopefully one of of them doesn’t squash the other like a bug.

More like this
Entertainment
8.18.2022 8:00 AM
She-Hulk post-credits finally solve an incredible Captain America mystery
By Eric Francisco
Entertainment
13 hours ago
House of the Dragon is a worthy successor to HBO’s Iron Throne
By Mónica Marie Zorrilla
Entertainment
9 hours ago
She-Hulk villain Titania could be hugely important to Avengers: Secret Wars
By Alex Welch
Share: