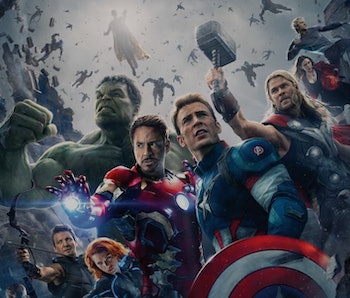 Iron Man was released in May 2008. Its $140 million budget wasn’t chump change, but it was a modest investment into what the relatively quaint blockbuster would help usher in. Eleven movies and $9 billion later, the Marvel Cinematic Universe can do whatever it damn well pleases. The studio has smartly compartmentalized its superhero series into installments called “Phases,” the third of which begins with the release of Captain America: Civil War on May 6, 2016. Ten more Phase Three movies are slated before July 2019. That’s a long time off. Almost no one is thinking that far ahead. So let’s start. What about … Phase Four?

We know, at least, that it begins in 2020 with unnamed movies already slated for May 1, July 10, and November 6. Its announcement let the nerd speculation begin. We’re going to take it a step further here and guess at what those three movies will be.

Here’s what they won’t be. Many Marvel fans are clamoring for a fourth installment of the standalone adventures of Iron Man, Thor, or Captain America. If one of those were any of the three slated movies it would mark the first time a single superhero would get a fourth movie in the MCU. That’s highly unlikely on its own, but also because Iron Man 4, Thor 4, or Captain America 4 would potentially be released too close after the release of Avengers: Infinity War - Part 2, which includes all three of those superheroes. Captain America: The Winter Soldier was released a year before Avengers: Age of Ultron and Captain America: Civil War will be released a year after it, but it ups the potential for Captain America overload at Marvel. There was a four-year gap between Thor movies, which puts 2020 in a prime spot to revisit the god of thunder, but does anybody really want that?

There was also a three-year gap between Iron Man movies, and knowing what we know about the upcoming Marvel Phases means we wouldn’t have another Tony Stark movie for seven years or more. But that gap doesn’t really matter; Robert Downey Jr. has emerged as the face of the MCU and will appear in Civil War and the upcoming Avengers two-part threequel.

This prompts the question: Would Marvel really want to revisit another standalone movie in a fourth installment that quickly after the gargantuan two-part Avengers production? We think not. What we do think is that Phase Four will kick off with a sequel, as Marvel is wont to do when beginning a new chunk of movies. Phase Two was cued up with Iron Man 3, and Phase Three is set to kick off with Civil War, which brings us to our first prediction for Marvel’s fourth attempt at total box office domination.

Not much is known about the first Doctor Strange movie, yet here we are talking about what’s next. Such is the Marvel machine at its best. The first installment stars Benedict Cumberbatch as Stephen Strange, the world’s best neurosurgeon who also happens to harness near-omnipotent magic superpowers. Whether the doctor gets his own sequel will depend on how good the first one does, but considering Ant-Man was at the bottom of the MCU box office totals and will hit the big screen again in 2018, Marvel seems at-ease with its numbers. Plus, the four-year gap between the first movie and a potential Doctor Strange 2 makes 2020 a perfect time for a sequel.

Guardians of the Galaxy 3

This one seems like a gimme, which wasn’t the case when Marvel took a gamble on this band of weirdos — that, let’s not forget, includes a Hodoresque tree and temperamental anthropomorphic raccoon — and released Guardians of the Galaxy in 2014. Its $774 million worldwide haul wasn’t too shabby either. With Vol. 2 dropping in 2017, a 2020 spot fits nicely in the three-year gap between sequels. Plus it could be a good bizarre companion to Inhumans, which comes out in July 2019.

Who the hell really knows what to expect with Marvel’s incarnation of your friendly neighborhood web-slinger. The fact that the 2017 untitled Spider-Man movie is the second reboot in a decade will be the major talking point, but the fact that the character is coming back to Marvel seems to indicate he’s in good hands. We’ll get our first look at actor Tom Holland as the web-head in Civil War next year, followed by the first standalone movie after that. A sequel is inevitable, and if reports are to be believed about him popping up in Infinity War, then a second standalone Spider-Man movie the next year seems about right — especially that July 10 spot sitting smack dab in the middle of summer movie season.

Poor Hulk. No one really knows what to do with him. The inclination to bring him back in the lead is there, but the Planet Hulk series that fans want (which involves the big green Dr. Jekyll stand-in banished to the far reaches of space) isn’t what Marvel has in mind for him. MCU mastermind Kevin Feige even told IGN in 2014, “There are no plans for Planet Hulk anytime soon.” Pretty definitive. Instead of the Hulk himself, maybe Marvel will get bold with a She-Hulk standalone. They’re prepping their female hero-led movies with Ant-Man and the Wasp in 2018 and Captain Marvel in 2019. They could keep the kickass lady superhero movies going by getting weird with She-Hulk in 2020. But if audiences haven’t embraced the easily recognizable Hulk himself, would it make sense to take a leap with the She-Hulk? We say why not?

A Blade reboot is our wildcard. Wesley Snipes faithfully brought Marvel’s vampire to the screen three times, concluding with 2004’s Blade: Trinity, and maybe it’s time to start over? Those other movies weren’t technically in the MCU, so it would be a good starting point. Feige spoke to Entertainment Weekly in 2013, and admitted that a group of newly acquired heroes, including Blade, “all have potential but I think we need to find the right time.” A potential Blade reboot would also hinge on the success of Black Panther in 2018. With details of that movie very much up in the air, so is Blade.