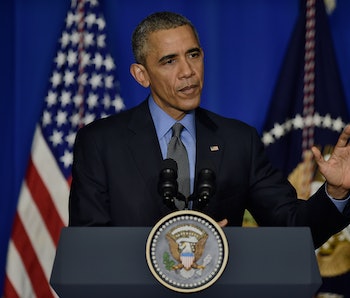 In just a couple days, the massive number of officials, politicians, and diplomats who came to Paris for the most anticipated climate change negotiations in years will leave. Time is running out and, predictably, resolution has been lacking. Whether a deal is reached or not, these climate talks will definitely come down to the wire.

Progress has been made, though, in the 10 days of negotiations so far. A draft negotiating text released Wednesday has significantly pared down the sheer number of words that are up for debate, which are indicated by square brackets.

This 29-page document will be the basis for the furious negotiations of the next few days. Countries will be fighting desperately for items that were cut with this most recent draft, and items still to be decided.

If you want to dig into the actual negotiating text but aren’t sure where to start, Mashable’s Andrew Freedman has prepared a helpful annotated version.

There’s a lot still up for discussion, but here are a few of the most contentious points.

Will we aim to cap global warming at two degrees Celsius or 1.5?

This language will go into the “purpose” section of the agreement. In a sense, it’s only aspirational — the real meat of the work will be in setting emissions targets and achieving them. And a lot of scientists believe achieving even the two degree limit is a fantasy. Remember, the world is already one degree above the pre-industrial average, and would keep warming even emissions dropped to zero tomorrow.

So why argue over this half a degree? Fundamentally, it is a signal about how seriously the world plans to take this problem. The actions required to get to a 1.5-degree world are dramatically more intense than those required to get to a 2-degree world. And this matters, particularly to countries that are most vulnerable to climate change, including low-lying island nations and most of Africa. From their perspective, two degrees means they’re hooped.

Here’s a bit of hopeful news: A group of more than 100 countries emerged in Paris Tuesday after six months of secret meetings, calling for an ambitious and binding agreement. They’ve called themselves the “high ambition coalition” and they represent more than half of the member countries, including the United States, all of the European Union, and 79 countries in Africa, the Carribean, and the Pacific. Lack of representation from emissions giants like India and China though, will continue to be a major barrier to progress.

How will emissions targets ratchet up over time?

The independent emissions targets produced by member countries ahead of the climate talks are only enough to limit warming to about 2.7 degrees Celsius — if the agreement is going to do its jobs, those targets will have to get stricter over time.

The latest draft agreement leaves the door open for countries to “confirm or update” their commitments by 2020 or 2021, which could mean that commitments could be ramped up even before the Paris agreement comes into force. The first review would be in 2023 or 2024, with subsequent reviews every five years after that.

This is actually very strong language compared to other options presented earlier, and the relative lack of brackets in these sections indicates a growing consensus on the issue.

A lot of folks are holding their breath on developing countries to make good on an earlier promise that climate change mitigation money will hit $100 billion annually in 2020, and scale up from there.

That language is still in the draft agreement, but never outside of brackets, which means it’s very much still up for debate. The US announced on Wednesday it will double its commitment to $800 million, a strong signal to the world that other rich countries will be expected to follow suit.

America is also pushing for more countries to chip in. New bracketed text in the draft suggests that maybe not only countries that have developed but also those “with the capacity to do so” could be called on to contribute.

And then there’s the question of paying for loss and damage. Should countries affected by climate change be allowed to effectively sue the countries that caused the damages in a binding judicial system? This portion of the draft has the United States and other big historic emitters understandably nervous, and as it stands the entire section remains in brackets.

If there’s one safe bet, it’s that just about no one involved with the negotiations will be getting much sleep any time soon.