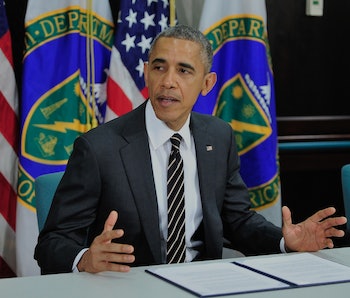 If there’s a chance the upcoming climate change negotiations are going to collapse into catastrophic failure, the U.S. government won’t acknowledge it.

“I am not go­ing to indulge in thinking about the down­side of Par­is,” said Todd Stern, the State De­part­ment’s chief negotiator on climate change, when asked to speculate on failure at a press conference on Tuesday. “I am go­ing to prefer to fo­cus on the up­side. What I will say is this: The stars are more aligned right now to reach agree­ment than I have ever seen hap­pen be­fore. We have a real op­por­tun­ity.”

Nearly 200 countries have signed onto the United Nations Framework Convention on Climate Change, which mandates annual meetings (and sub-meetings, and sub- sub-meetings) with the goal of coordinated action to avoid the most catastrophic impacts of global climate change. The problem, though, is that after more than 20 years of talk, the parties have agreed on little besides the necessity of further negotiations. Efforts to establish a binding treaty for the whole world in Copenhagen in 2009 fell apart in epic fashion.

This year’s conference in Paris runs from November 30 to December 11.

Everyone, it seems, is banking that relentless positivity will be the thing that makes success a possibility, this time around. “I am optimistic for Paris,” said the United Nation’s chief cat-wrangler on the file, Christiana Figueres, in a recent Reddit AMA.

“We have so much momentum going into this conference from the past five years of progress in the negotiations and from the businesses, investors, cities and regions that are already engaged in climate action,” she said.

Reaching a deal that every country will put its name to will take optimism, but it’s also going to take hard work. President Barack Obama, for one, is pushing his diplomatic efforts into high gear to push the odds in his favor for a successful Paris conference. He wants to position himself as leader, which he made very clear in his recent announcement to kill the Keystone XL pipeline.

He has planned a series of crucial meetings for early next week. On Monday morning he will meet Chinese president Xi Jinping, with the expectation that the leaders of the two biggest carbon emitters will announce their joint commitment to climate action.

He also plans to meet one-on-one with leaders of France and India.

On Tuesday, Obama will meet with leaders from a group of low-lying island nations, who are keen to see rich countries pony up the $100 billion in annual funding for climate change mitigation that was set as a goal at the 2009 climate conference in Copenhagen.

It was that promise that rescued the Copenhagen negotiations and took them from a complete failure to a weak, voluntary agreement to continue to work on the climate change problem. And in 2014, annual money for climate change mitigation hit $62 billion, which is nothing at which to turn up your nose.

Will Obama’s efforts herald a successful agreement in Paris, or will the United States again be in the position of scrambling to make last-minute-lemonade?

The Paris conference will benefit from lessons learned from earlier failures, but it will also benefit from recent technological leaps that have made renewable energy a real, viable alternative. Wind power prices keep plummeting, and even oil-rich countries like Saudi Arabia are getting into solar energy.

In the past, climate change negotiations have been positioned as a way to divide up a dwindling pie of economic resources to be garnered from burning fossil fuels. It’s no wonder, in that context, that so little has been agreed upon in more than 20 years of talks.

But today, there’s a new narrative. Fossil fuels are out, clean energy is in. In the economic race to the future, the spoils will go to the countries who can harness the wind and the sun to their advantage.

During this round of climate talks, if the cheerleaders have their way, it will be about how the countries of the world can lift each other up and get there, together.