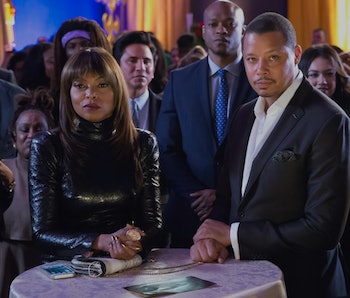 Last night’s high Empire drama — with its series of Shakespearean betrayals — marks the end of a season for a show, effectively. Technically, though, we’re only halfway there: Eight more Season 2 episodes will air on FOX in March of next year. But this episode — subtly titled “Et Tu, Brute” — is a definitive breaking point, and is a little more infuriating in the cliffhanger department than the average serial drama’s season finale because we know we only have a few months to wait.

Given the whirlwind of twists-for-the-sake-of-twists, unlikely cameos and logical impossibilities — best musically and otherwise — that have come to define Empire by this point in its run, it’s really only possible to imagine the future direction of the show being a lot more of the same. Soap operas like Empire — even less busy, to-the-max ones from Gossip Girl to (yes) Mad Men — can always find even more adverse relationships to set up. Many classic, unadulterated soaps, the daytime sort, have kept the jig going for decades: moving the show’s original pawns around, repeating basic dramatic situations as needed, and adding as many new and ridiculous minor antagonists as possible.

But it’s very hard to imagine Empire even truly finding a new, deeper way of surprising us. We know that in terms of overwrought, unlikely plot twists, its ambitions know no bounds — sometimes to the sacrifice of taste (i.e. Jamal: gay or nay?). The only foreseeable way forward for Lee Daniels’ monster of a franchise is to ramp up the absurdity even more, if it’s possible.

But still, that will just be familiar: Even if things seem to get superficially more “extreme” than ever, every buzzworthy twist in Empire has the same essential function and stakes by now. It would take a Lyon dying to send any kind of real shockwave. Sometimes it seems that’s what the show is most intent on doing, like it exists for the post-mortem quick hit scare headlines and “WTF” GIFs. Ratings may be gradually declining for the show, but that doesn’t stop #Empire from trending like hell every Wednesday night.

The end of Season 2, Half 1 sets up plenty of strands for the future. The world assumes from her scrutinizing of Rhonda and Andre’s house and escapades involving posing as a limo driver with blonde hair, that Anika is behind Rhonda’s tumble at the end of Episode 10. And knowing this show, I would bet that this means that Anika will find some sort of leverage with the Lyon family on the basis of her pregnancy with Hakeem’s child. That means that either infanticide or some seriously troubled birth will become a thing that happened on Empire — basically, a logical next step.

Luscious is going to be at Jamal’s throat in the worst way — also, hilariously and childishly — now that he no longer has any power to wield over him. It’s gonna be artist-to-artist, and let’s hope that means many more absurd, in-the-studio struggles for Luscious, like the one where he just can’t “find the right sounds” on a sitar. Boom boom boom boom, (sitar lick) bang ban bang bang, as they say.

Meanwhile, Mimi is definitely going to set up some crazy, dystopian instantiation of the Empire label — and Hakeem, turning devil, will vie for the crown, if the “Next Up” trailer has anything to say about it. This will be a recipe for new cameos, like someone as Empire’s new Katy Perry-esque, anodyne Top 40 star — one who makes Luscious and maybe even Cookie’s blood boil. Who’d play her? A revived Hilary Duff? Or actually, like, Demi Lovato? I can’t wait. Or maybe I can — Empire has been exhausting me a bit lately. Charlamagne da God, Da Brat, and Jason Derulo saying “turnt” on a show-within-a-show in one episode? Give us a break after introducing Alicia Keys as a main character!

Finally, you know that these “American Sound Association” awards are going to be a huge showdown. I hope they get Sway back for those — he’s still my favorite Empire garnish. “Dial in some Sway on this one,” Lee Daniels yells to no one in particular. “We need Luscious to get back on the interview circuit!”

The unmitigated flights of farce and epic, ringtone-beat-driven melodrama make Empire one of the most distinctive and zeitgeist-capturing shows on television. If it doesn’t always get the sounds of modern popular music right, it tries, and contorts them in often hilarious, occasionally (Teyana’s songs were great this season!) resourceful ways. But more importantly, the show continues to speak, in its own rowdy parlance, to a side of culture and politics that is not normally addressed on a major platform. As Empire descends further into its own weird, insular universe, it still holds these distinctions, and therefore provides an experience you can’t get anywhere else. So expect a necessary void to be satiated by next year’s half-season, but know that nothing will change.

More like this
Culture
Sep. 16, 2022
How an ultra-nationalist religious group became one of the most popular film producers in Japan
By Alicia Haddick
Mind and Body
Sep. 21, 2022
Is someone you care about going through a medical crisis? Here’s how to best support them
By Katie MacBride
Culture
Sep. 25, 2022
8 stellar sci-fi movies leaving HBO Max in September 2022
By Robin Bea
Related Tags
Share: