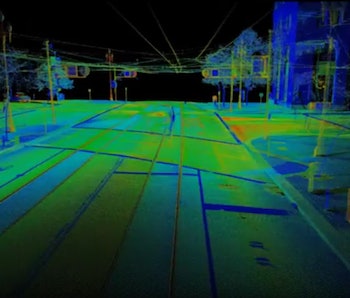 Want a super-accurate 3D map of an urban space? The answer (to this and so many other questions) is lasers.

Check out this sleek animation of downtown San Francisco’s Market Street, created by mounting lasers on a truck as it crawled down the block in the middle of the night:

LiDAR, or light detection and ranging, is usually used to map the Earth by aircraft from above, to capture topographical features and changing landscapes.

However, as the Market Street video shows, it can also be used on a smaller scale to create detailed visual maps. LiDAR works in much the same way as sonar or radar, except it uses light from a laser (rather than sound or radio waves) to measure the distance between the source and a point.

Here’s a cool animation of a truck collecting LiDAR data as it rolls down a street:

The San Francisco project is part of the Better Market Street initiative. The idea is to preserve a digital copy of exactly how the street looked in 2015, just ahead of the planned renovations, according to Wired.

More like this
Entertainment
8.3.2022 11:00 AM
Zurg creator reveals the Marvel villain who inspired Lightyear’s nemesis
By Brian VanHooker
Entertainment
8.3.2022 10:00 AM
Lightyear’s post-credits scene secretly sets up a nostalgic Pixar sequel
By Dais Johnston
Science
7.29.2022 10:00 AM
Which animals get Covid-19? A new database tracks cases around the world
By Jennifer Walter
Related Tags
Share: