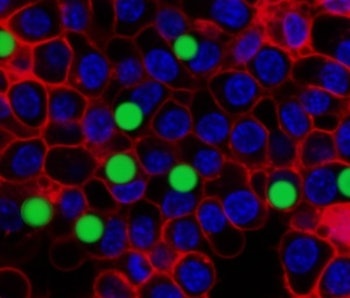 Lasers are pretty much the coolest shit ever, and now even microscopic cells in our body can use them. A research group at Harvard has made it possible to direct tiny lasers inside the body—effectively giving cells their own laser beams and lighting a particular tissue pathway up as the researchers see fit. The process will hopefully give doctors and medical researchers the ability to learn more about everything from drug deliverly, to the progression of illness and disease within the human body.

Light is an important instrument in medical research—it lets researchers see what’s going on in the body. Unfortunately, it doesn’t penetrate well into deep tissue. Scientists thus far have been leaning on the use of specific markers like fluorescent dyes and tagged proteins to help see what’s going on. But things still aren’t always clear.

So, the Harvard group began developing a micro laser that could solve this problem and light the body up in ways researchers hadn’t yet seen. A laser works by exciting atoms so they emit a particular wavelength. The laser also bounces off a pair of mirrors for augmented effects. One of the mirrors is partially transparent, and it allows light to escape in a narrow beam — the laser beam. The researchers needed to create a miniature version of this process within a living cell itself; the “mirrors” are basically inside the cell, confining and circulating light inside a small sphere, and keeping it trapped by refraction at the cell surface.

The researchers achieved this through two different methods. In the first method, a small drop of natural fat with a fluorescent dye was injected into the cell. In the other method, fluorescent polystyrene beads were injected. But in both techniques, firing pulses of light at the cell created a living laser that was trapped inside the cell, lighting it up for the researchers.

It’s the kind of breakthrough that could really change how scientists and doctors look at cells and tissues as a whole. Even the smallest changes in cells change whether they light up or not, which is very helpful for studying how small tweaks turn normal cells into cancerous ones, or how a particular infection spreads throughout the body.

At the very least, there’s no denying that giving cells their own internal laser beams is just badass.