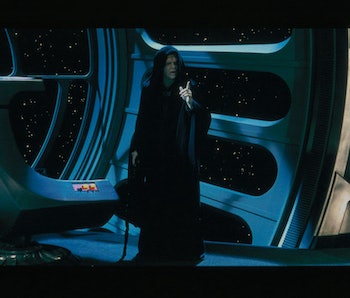 With Chewbacca safely detained and fined for driving Darth Vader to a local election this past weekend, the Galactic Empire was able to focus its efforts on the Ukrainian port city of Odessa instead of doing something stupid like build another Death Star. So in a plot twist straight out of the worst parts of the prequels, no less than Emperor Palpatine swept in and was elected to the Odessa City Council.

Well, not the Emperor Palpatine. It seems Ukraine has caught Star Wars fever lately, recently turning an old statue of Lenin into Darth Vader and one dark lord of the Sith declaring himself mayor of Odessa in 2013, 16 people calling themselves Darth Vader registered in the country’s parliamentary elections.

Palpatine’s win has Odessa mayoral candidate Aleksandr Borovik venting his frustration. In a post on his Facebook page, Borovik shared the news of Palpatine’s victory, but he was quick to point out that the newly elected councilman wasn’t the Darth Sidious we know and love to hate.

According to a translation on RT, Borovik’s post read, “A cartoon comrade of Darth Vader – Palpatine – received 54.4 percent of votes in Poselok Kotovskogo [one of Odessa’s neighborhoods]. Palpatine Dmitry, born in 1990, who works as an emperor at ‘LLC Palpatine Finance Group’ makes it to the city council on the Trust Affairs party list.”

At the bottom of the post, the candidate added the somewhat understandable rhetorical question, “This is beyond my understanding. People, what’s wrong with you?”

Palpatine wasn’t the only Star Wars candidate in the running. Other office-seekers registered as Yoda and Padme Amidala, as well as Vader and Chewbacca.

Hopefully Palpatine doesn’t do to Odessa what the Palpatine in Star Wars did to the Jedi and the Galactic Republic.

More like this
Culture
Jan. 14, 2023
2,454 years ago, one eerily familiar event led to the downfall of Ancient Athens
By Rachel Hadas and The Conversation
Innovation
Jan. 12, 2023
Government-issued digital currencies could bring about a dystopian future, security experts warn
By Molly Glick and Rahul Rao
Innovation
Jan. 19, 2023
A robot choreographer reveals why M3GAN — and all robots — should dance
By Molly Glick
LEARN SOMETHING NEW EVERY DAY.
Related Tags
Share: