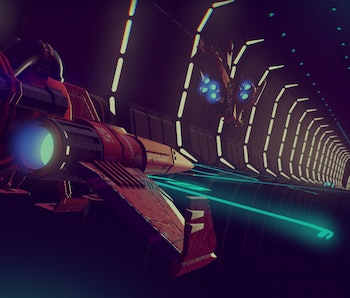 Sean Murray of Hello Games and lead developer on No Man’s Sky engaged in a rare but brief Twitter Q&A yesterday where he debunked early release rumors but winked and nudged attention to Sony’s conference at this week’s Paris Games Week, which begins October 28th and lasts until November 1.

When asked if No Man’s Sky will be released unexpectedly early, specifically this week (Oct. 27), he shut the rumor down.

A few hours later, he tweeted to a fan asking about No Man’s Sky having a presence at Paris Games Week. He replied in a PR-friendly manner telling gamers to “tune in” to whatever Sony has to say. Of course it was ambiguous.

The winking emoticon: Making people run wild with speculation since 1997.

Also during his Twitter appearance, Murray provided some context to the overall motivations going on at Hello Games. As if evoking Eminem, Murray tweeted they only have “one shot” to make the game right.

Modern gaming has enough room for second first impressions, though. Would it be out of place to expect No Man’s Sky: The Taken King?

No Man’s Sky will be available for the PlayStation 4 and PC — eventually.