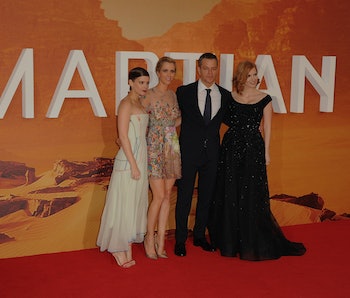 I think it was Robert F. Kennedy who once said, “Only those who dare to fail greatly can ever achieve greatly.” There were a lot of failures at the box office this weekend, but only one of them really dared to fail greatly. Is Hollywood, after all, solely about the numbers? Or is it another, broader understanding of cultural influence and appreciation? Failing greatly is the easy part. Achieving greatly takes patience, because this single weekend doesn’t tell the whole story.

What Won: The Martian

Stop us if you’ve heard this one before. Ridley Scott’s The Martian won the box office this weekend. By pulling in $15.9 million the stranded-on-Mars extravaganza was No. 1 for the third time in a month, bouncing back from last week’s No. 2 slot. The competition has been stiff and eclectic, but The Martian has proven staying power. The movie should manage to eke out the $21 million it’ll take to make it Scott’s highest grossing domestic movie, beating the over $187 million Gladiator made in 2000.

What Was Disappointing: Steve Jobs

Wow, well, that thudded. When it opened in limited release in New York and Los Angeles two weeks ago, director Danny Boyle and screenwriter Aaron Sorkin’s biopic Steve Jobs debuted to the best per-theater average of the year. It also had the awards pedigree of its star Michael Fassbender, its director, and its screenwriter. We predicted audiences would embrace the unorthodox biopic for a potential rake above $20 million. Instead, the movie bombed, taking in just over $7 million its first weekend in more than 2,000 theaters. So, what happened? Maybe it was Jobs over-saturation and subject matter that missed its zeitgeist moment, maybe it was the lack of leading starpower in Fassbender, or maybe it was just a crowded weekend with other adult-minded fare like Bridge of Spies and The Martian. Whatever it was, don’t count the movie out just yet. If it gains awards traction it could inch by with a steady stream of box office receipts.

What Was Surprising: Jem and the Holograms

Another bomb this week was the bigscreen adaptation of the 1980s cartoon Jem. The barely advertised micro-budget movie made only $1.3 million from more than 2,400 theaters. That tally makes it the fourth-poorest showing in history for a 2,000-theaters opening, behind such classic bombs as Ooogieloves in the BIG Balloon Adventure and Delgo. Despite the historically bad opening, it isn’t so much a failure as it’s just not a quick turnaround success. The movie was budgeted at $5 million and produced by micro-managing wizard Jason Blum and his Blumhouse productions. Usually the company puts out smaller horror movies around the same budget mark only to have them easily double or triple their budget in the opening weekend. It’s what happened with Blumhouse’s The Visit from M. Night Shyamalan, which opened to over $25 million in its opening weekend on a $5 million budget. Jem and the Holograms will make back its budget eventually, but maybe Blum and his production company should stick to horror.

What You Should Take a Chance On: Steve Jobs

Seriously America, why did you not go see this movie? And it wasn’t just simply ignored, it was aggressively ignored. Maybe people didn’t really want another entry in the now long list of media covering the late Apple CEO, or maybe they didn’t want an overly talky and heavy-handed movie about the way we live now. But it’s unlike any of the other books or movies about Jobs, and its dialogue-driven aesthetic trumps more boring biopics about misunderstood geniuses. Zeitgeist or not, this movie is significant and its initial rejection by the public means it’s equally misunderstood.