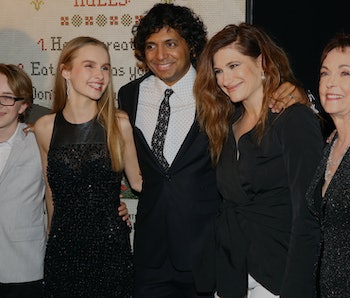 We’re unabashed fans of M. Night Shyamalan’s new movie The Visit here at Inverse, and it looks like the American public followed suit. With $25 million in its first three days in release, The Visit finished second in the weekend box office. Now maybe you won’t laugh at the very mention of his name in movie trailers anymore.

The psychological thriller The Perfect Guy was the only film to top Shyamalan’s micro-budget found-footage horror comedy (say that five time fast) about two adolescent kids visiting their creepy grandparents and finding that all is not right with Nana and Pop-Pop.

The Visit also earned $4 million in limited foreign release, putting its worldwide total at just under $30 million. Not too shabby for a director who hasn’t made a decent movie in damn near forever.

Though The Visit’s tally was the third-smallest opening by a Shyamalan film, the small-bore, low-risk horror movie cost only $5 million to make. Perhaps credit that return on investment to Producer Jason Blum, known for making cheap horror movies, like the Paranormal Activity franchise, that earn big. The Visit making back five times its budget out of the gate isn’t so bad, especially considering the critical drubbing Shyamalan’s films have taken for the past decade.

The other surprising story out of the box office this weekend was a streak continued by The Perfect Guy. The film, starring Sanaa Lathan as a woman who begins an affair with a stranger (Michael Ealy) when her ex-boyfriend (Morris Chestnut) mysteriously returns to her life, marked the fifth straight weekend that a film with a predominantly African American cast topped the box office. The N.W.A. biopic Straight Outta Compton ruled the box office for three weeks in a row, while the Christian drama War Room won the Labor Day weekend.

Look for The Visit and The Perfect Guy to possibly dip next weekend as the Johnny Depp crime drama Black Mass is released this weekend, while The Maze Runner: The Scorch Trials will look to top the younger crowd to try to take the top spot.