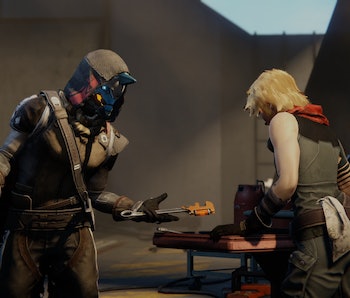 Destiny showed flashes of brilliance but ultimately left gamers and critics underwhelmed upon its release last fall. The main point of contention was the game’s story. Touted by developer Bungie as a grand and epic tale like Star Wars, Destiny ended up a vague, incoherent jumble composed of indistinguishable missions that ultimately amounted to “Go here, shoot enemies, press X for plot.” Compelling characters and motivations were absent.

Recent expansions like The Taken King have addressed these criticisms and gamers tend to agree that Destiny is better now than it was before. But a new Kotaku article from Jason Schreier has unveiled what happened behind the scenes that forced the developers to shave and trim the ambitious story from its original draft in the summer of 2013.

That story proposed a different journey than what players have embarked on since September of last year, and would have addressed all of Destiny’s shortcomings from the start.

1) Rasputin mattered a whole lot more than he does now.

Rasputin is a bodiless Warmind (A.I. in Destiny lore) in the Seraphim Vault of the Cosmodrome protecting stuff the Fallen want, naturally. Players are tasked with protecting him in “Siege of the Warmind” in the DLC pack, The Dark Below. Targeted for players leveled at around 25, it’s a notoriously difficult mission that few can accomplish alone.

There’s a reason why “Siege of the Warmind” is harder than most: It was once the final fight, because Rasputin used to be super important.

“In today’s Destiny, Rasputin doesn’t do much but listen to classical music in a steel bunker on Earth, but in the 2013 version, he would have starred in a more prominent role. Alien Hive would have kidnapped the machine and brought him to their Dreadnaught spaceship, which was later cut from vanilla Destiny and moved to The Taken King. Originally, this Hive ship would have been part of the main story. ‘The entire last third of the game took place on the Dreadnaught with you rescuing Rasputin,’ said one person who worked on the game.

Fans have long wondered about the bloody Exo in one early piece of Destiny concept art. Turns out that was Rasputin, according to a source. In the original story, the player would have rescued this guy from the Hive.”

The original Rasputin is seen here:

2.) Osiris was your mentor.

Osiris still hasn’t shown up in any form in Destiny except for the weekly Trials of Osiris multiplayer challenges introduced in the House of Wolves expansion.

But in the original story, Osiris was the player’s mentor and guide. Given that Destiny begins with the player’s mysterious awakening, naming the Egyptian god of resurrection is a pretty obvious allusion.

“Osiris, described by one source as an Obi-Wan Kenobi-like mentor living in an ancient Vex temple on Mercury … Groups of flawless victors in Trials of Osiris gain access to the enigmatic wizard’s Mercury temple, which was salvaged from the original story and reused here. In the pre-reboot Destiny story, Osiris served as a guide for the main player.”

3.) And Osiris had a robot assistant, who is now the Stranger.

Today’s Destiny has Ghost, a cross between R2-D2 and Halo’s Guilty Spark, serve as a companion to players. He doesn’t do a lot of mentoring — that’s taken up by the Vanguards, who still don’t do hell of a lot but chill out at the Tower giving you missions like they’re chores. Besides having Ghost, players are for the most part left to themselves. But at least Ghost is cute and flies around, and is no longer voiced by a bored Peter Dinklage.

The Stranger, voiced by The Walking Dead’s Lauren Cohan, is an Exo Hunter with a vested interest in the player. Her motives are still unknown, but she gives you her rifle after completing Vanilla Destiny’s final mission.

Her model was originally intended for Osiris’ robot assistant.

“[Osiris] had a robotic assistant whose model was, according to a source, scrapped and reused for yet another character who will be familiar to hardcore Destiny fans: the Stranger.”

4.) Prince Uldren was a totally different character with Cayde-6’s personality.

Prince Uldren is an Awoken and brother to Queen Mara Sov in the Reef. He’s antagonistic to the player, has a flamboyant flair, and looks like Criss Angel dipped in a pool of a melted Grimace.

He wasn’t supposed to be a jerk. In the original Destiny, the model used for Prince Uldren was supposed to be a different character, a rogue named Crow, possessing a fun, witty personality that Cayde-6 has now.

“In Destiny’s original story, the Crow would have met the players in an early mission … and worked with them to find Osiris. One person familiar with the original story described the Crow as rogueish and charming, not unlike Nathan Fillion’s character, Cayde-6, in the most recent expansion. ‘Basically, who Cayde-6 is in The Taken King was the personality of the Crow,’ that person told me.

Crow would have been an ally, but in Destiny now Uldren hopes you die trying to take down a Gate Lord. Of course you disappoint him.

The “Crow” part of this story still remains, in the Queen’s army of spies who are named “Crows” with Uldren at their command.

5.) The mission structure was more traditional, and more meaty.

In Destiny, cutscenes are few and far between, but the story is so lacking that they’re really just a chance to see your character interact with the world beyond shooting a gun. Most story missions happen simply by going to the source, pressing a few buttons, and then embarking on the mission before rinsing and repeating. There’s very little in the way of actual storytelling.

The original Destiny had entire cutscenes for each mission that were full of story and development.

“The pre-reboot Destiny had way more of a focus on story than the actual game wound up having. ‘Story missions … always began with a Communique from a character,’ said a source. ‘They were 30-45 second cutscenes of the NPC setting up the mission context. Osiris announcing a dramatic discovery about the Vex and asking you to dig up an ancient relic on Mars, or the Crow calling for help from the middle of a firefight with Fallen on Venus. And then every mission ended with a full cutscene, three to five minutes.’”

6.) The original The Taken King expansion would have included a new planet, a European Dead Zone, and a seamless fireteam integration.

Not specific to the story Destiny didn’t tell, Bungie’s original plans for The Taken King included key additions that would have been huge, like joining fireteams if you happen to encounter them — which does happen, a lot.

“Two sources say the original plan was to release this major expansion at $60 and include a brand new planet, Europa, as well as a new area on Earth called the European Dead Zone (which itself had been pushed back from vanilla Destiny). They also hoped to add a totally new feature called multiple fireteam activities, which a source described like this: ‘Imagine like you and I are in a fireteam, and we’re fighting down this one path that converges with two other paths and you get three fireteams all fighting together against a boss, or against some sort of mobs.’”

Did any of these changes make Destiny worse? Was the original more compelling than Destiny is now? That’s up for speculation. Kotaku’s sources have divided opinions on the matter, one saying the original was “confusing” and “highly esoteric.” Another had faith because, unlike Destiny now, the original had “strong characters” and a recognizable beginning, middle, and end.

Destiny still doesn’t make sense, and I didn’t even know I completed vanilla Destiny until the mission was over and I checked online to see why I watched a cutscene that looked like the end of a movie.

I’m enjoying the game just fine, and I have the entire Taken King content to play through. But reading these would-have-beens is only making the game’s shortcomings — the meaningless grinding, the context-less journey, the emotional detachment I have with my own Guardian who actually looks like me — ever more stark.