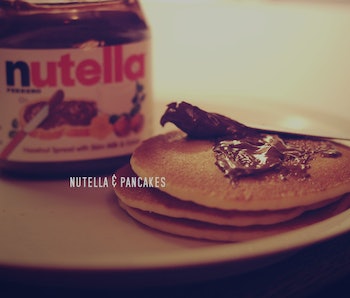 We’ve told you how to kick guacamole’s ass, and we’ve given you the secret to scrambled egg bliss, so it’s finally time for the piece de resistance of semi-lazy food-making. We say semi-lazy because this one will actually involve you getting off your couch and prepping the food. We know, it’s a lot to handle, but don’t fret. Set aside a little time to think about the dish the night before and you’ll be fine come sunup.

But what could get me to actually think about the food I make before I shuffle to the fridge to make it, you ask. One word, three syllables: Nutella. We’re not philosophers (or chefs for that matter), but it’s an objective truth that adding Nutella to anything makes it better. Its sloppy hazelnut goodness fits atop any number of food pairings. Pancakes, most of all.

Not quite a blintz, not yet a crepe, Nutella pancakes are the perfect breakfast choice for those who want a little dessert during your first meal of the day.

First, we don’t discriminate here about pancake choice. If you want to take a few eggs, milk, flour, and baking powder to mix together into some flapjacks from scratch then that’s good on you. But that amount of effort would belie our underachieving sentiment, so in this case instant pancake mix works fine. Bisquick, Aunt Jemima, Krusteaz — whatever fluffs your cakes.

The real step before pure pancake heaven is to get your glorious tub of Nutella. If you really want to go all out, spring for the 35-ounce jar and go wild. The first thing to do after ripping open the golden foil along the top edge is to get a baking sheet and line it with parchment paper.

Then, plop an equal number of dollops of Nutella on the baking sheet to the amount of pancakes you’ll eventually make. Make sure they’re slightly smaller than pancake size to allow some room to expand on the pancake batter when you eventually add the Nutella to the pancakes. Seven Nutella disks is usually enough, just so you can eat one and then have six pancakes when you’re done. Place the pan in the freezer for an hour or so. In the meantime, you could read Inverse. There’s plenty of good stuff there. Wow, see, the time just flew.

After an hour, check to make sure the Nutella disks have frozen into small, circular cakes themselves. If they look like little Nutella cookies, keep them there for a bit longer until you fire up a large nonstick pan on the stove. When the heat is sufficient, take the readymade pancake batter and dollop about ¼ cup onto the pan. Quickly add one of the Nutella disks on top, as they melt fast, and then cover it with equal amounts of pancake batter. If any Nutella starts to seep out, try to contain it within the pancake/sandwich hybrid. Bubbles will appear along the edges after a few minutes of cooking. Now it’s time to make sure the underside of the pancake is golden-brown. If it’s good and flaxen, flip and cook the pancake until the other side is equally golden-brown.

Repeat the same procedure with the remaining Nutella cakes. If there is any pancake batter left over, use up the rest of the 35-ounce tub of Nutella on more frozen biscuits to add to the batter. You could also just scarf some Nutella biscuits on their own. But you figured that out already.

Once you’re done, serve up with some whipped cream or cherries on top, if you’re that bold. The tl;dr here is when you introduce pancakes to Nutella you’re going to have to make an honest effort to screw up such a good thing.