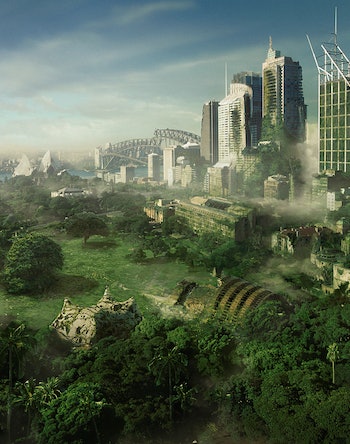 In the wake of the news that the 2010’s was the hottest-ever decade on record, many are asking — what can be done to stop the trend? As it stands, warming is only expected to continue, with new record-setting heat. And with the conversation on climate change focused on doom and gloom, it can seem like our future is already written.

But it may not need to be so. A new study published Monday in the Proceedings of the National Academy of Sciences suggests that there are six “social tipping elements” that could push humans to take action and successfully curb the effects of climate change.

The study draws on the science of how ideas spread in social networks — aka going viral. What makes an idea go viral depends on people within the network’s behaviors, opinions, knowledge, technologies, and social norms. And they’re contagious.

“Once triggered, such processes can be irreversible and difficult to stop.”

These dynamics can drive social movements, like feminism, or behaviors like smoking, the researchers say. And if we apply the same theory to climate action, it just might catch on. These are the six steps the science suggests we need to take to get there.

6: Get honest about carbon

Even for those who believe climate change is a big problem, information about where the problem is most acute remains opaque. If more products and services disclosed their carbon emissions, it would underscore exactly what needs to change, the study suggests.

In this scenario, businesses and producers would reveal their fossil-fuel consumption and involvement — and also government would set strict disclosure guidelines and regulations to make sure they own up.

Achieving this goal may take “a few years,” the researchers say — but they could influence how people spend their money. If we get honest about carbon, it could lead to a 10 percent reduction in emissions from household grocery consumption, based on data from the United Kingdom.

By painting fossil-fuel use as a moral question, more people will feel like they have no choice but to reject them, the researchers suggest. Peer groups, environmental organizations, youth, and opinion leaders can help push society in this direction.

This may already be in action — global youth movements led by Greta Thunberg, who last year told world leaders, “You’ve stolen my dreams,” are very much underway.

Pinning down exactly how much linking carbon to morality may change our ways is difficult, because it’s unprecedented. And seeing real results could take 30 to 40 years, the researchers say. But this kind of informal enforcement — through institutions and peer groups — could pack a punch. What’s stronger than peer pressure, after all?

In high school, did your teachers talk about climate change? How about in elementary school? Climate-change education and awareness in schools can go a long way toward spreading knowledge and understanding of the impacts of the heating planet.

We’re more likely to change our minds on a subject before the age of 25, research suggests. So getting to young people before they’ve grown stubborn and jaded could be key in the fight against climate change.

Data from Italy shows that better climate education leads to up to 30 percent fewer household emissions over two years, the researchers say. But for change to take hold, it could take 10 to 20 years — and national policies would have to mandate that schools teach their students about climate change.

Energy production and storage has to be tailored to curbing climate change. While education can help individuals take steps toward climate action, money talks. Financial incentives to shift away from fossil fuels — like removing their subsidies and encouraging decentralized energy — can bring small social changes to the institutional scale, the researchers say.

Subsidies that drive down the relative price of renewable energy as compared with fossil fuels would push energy companies toward greener sources of power. Those incentives would necessitate a joint effort between governments, energy ministries, and big energy producers — and, much like the education element, would likely need to be enforced by regulations.

But while it requires legislation, this step has swift and substantial impact. Researchers estimate that incentivizing the energy industry to change could reduce global emissions by 21 percent in just one year.

Decentralization of energy plays a role, too, the study shows. In communities or towns, local governments can demand 100 percent renewable energy. So even if the country is stuck on fossil fuels, citizen can push for faster action in their hometowns.

The profitability of fossil fuels led to their exploitation, and the industry is interwoven with so many others that knocking out fossil fuels requires all-out divestment.

But if investors take their money out of the fossil-fuel industry, that may make a big difference, the researchers say.

For instance, a 2013 study looked at the investments of a major university in Canada. It showed that the school could reduce greenhouse gases tied to its investments by 26 percent. All it would take is restructuring the institution’s portfolios to move its money away from greenhouse gas-intensive sectors.

Markets move quickly — so this kind of change “could occur within hours,” the researchers say.

The settlements we inhabit, and how we power them, has an enormous effect on the climate. Buildings alone are responsible for 36 percent of carbon-dioxide emissions in the United States. Using greener technology could help buildings cut their emissions by 80 percent compared to levels in 2005, according to one 2019 study.

Once again, achieving this step will require action by city governments, activist groups, and individual citizens, the researchers say.

They estimate that once that action tips toward demanding greener cities — which could take 10 years — we could see emissions from cities reduced by 32 percent over a 14-year timespan.

The latest temperature reports from the National Oceanic Atmospheric Organization and NASA agree: Time is of the essence. Real climate action needs to be immediate and major — if we are to avoid the worst effects of the warming planet.

The new study outlines six ways to accomplish that goal — at the local, national, and global scale — and various timelines to make it happen. To deal with such a complex issue, all parts of society would need to be on board.

As the researchers write:

“The urgency and complex character of climate change require transdisciplinarity and engagement with social movements, knowledge brokers, and change leaders.”

Abstract: Safely achieving the goals of the Paris Climate Agreement requires a worldwide transformation to carbon-neutral societies within the next 30 y. Accelerated technological progress and policy implementations are required to deliver emissions reductions at rates sufficiently fast to avoid crossing dangerous tipping points in the Earth’s climate system. Here, we discuss and evaluate the potential of social tipping interventions (STIs) that can activate contagious processes of rapidly spreading technologies, behaviors, social norms, and structural reorganization within their functional domains that we refer to as social tipping elements (STEs). STEs are subdomains of the planetary socioeconomic system where the required disruptive change may take place and lead to a sufficiently fast reduction in anthropogenic greenhouse gas emissions. The results are based on online expert elicitation, a subsequent expert workshop, and a literature review. The STIs that could trigger the tipping of STE subsystems include 1) removing fossil-fuel subsidies and incentivizing decentralized energy generation (STE1, energy production and storage systems), 2) building carbon-neutral cities (STE2, human settlements), 3) divesting from assets linked to fossil fuels (STE3, financial markets), 4) revealing the moral implications of fossil fuels (STE4, norms and value systems), 5) strengthening climate education and engagement (STE5, education system), and 6) disclosing information on greenhouse gas emissions (STE6, information feedbacks). Our research reveals important areas of focus for larger-scale empirical and modeling efforts to better understand the potentials of harnessing social tipping dynamics for climate change mitigation.