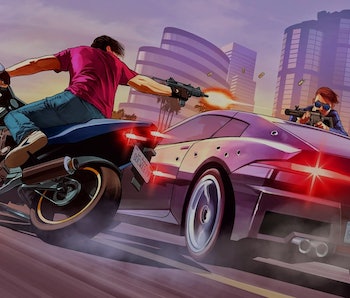 It’s nearly been eight years since Rockstar Games released a new Grand Theft Auto title, and fans of the open-world adventure series have been ravenously searching for clues, hints, and leaks about the rumored GTA 6 release for years now. Now, a redditor might have found an Easter egg that has been hiding in plain sight since the 2013 release of GTA 5.

Back in December, another eagle-eyed fan noticed the recently released Diamond Casino Heist DLC seamed to tease potential GTA 6 locations. On December 4, redditor /u/MrBurpAlot posted about an in-game billboard in GTA 5 that seemingly aligns with persistent rumors about the plot of GTA 6.

The in-game drug smuggling company “Six Figure Temps,” has its own website that mentions Central and South America, both rumored settings for GTA 6. It also mentions Adios Airlines, another potential nod to the rumored sequel’s oft-speculated setting.

Unconfirmed GTA 6 rumors clai the game is in development under the codename “Project Americas.” Those same rumors allege the game will take place in Vice City (fictional Miami), and players will travel to various Latin America-inspired locations, as well as Liberty City (fictional New York).

As a whole, the game will allegedly be a riff on Netflix’s Narcos, putting players in the shoes of an up-and-coming drug dealer who becomes an international kingpin by expanding their criminal network overseas.

The Six Figure Temps could be a hat tip to this potential project but multiple other Redditors have cast doubt on MrBurpAlot’s theory, claiming that the billboard has existed since GTA V’s eight years ago release.

Over the years, Rockstar has carved out a formidable reputation for teasing its upcoming games in existing titles. Grand Theft Auto: The Ballad of Gay Tony mentioned Los Santos (fictional Los Angeles), which is where GTA 5 would take place four years later. Curious gamers posted their theories about what the Los Santos ads could mean for future titles. In retrospect, it reads a lot like MrBurpAlot’s post. The developer’s also known to insert sly references to popular movies and other games throughout its games, often in side missions.

Who knows if “Project Americas” will be what GTA 6 ends up looking like. If nothing else, all this online detective work among the fan community is a pretty compelling example of just how excited players are about the next installment of the beloved open-world mayhem franchise.