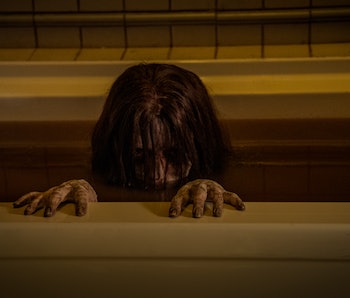 In case you weren’t aware due to the New Year and the threat of World War III, The Grudge hits theaters today. A reboot of the 2004 Hollywood remake of the 2002 Japanese horror movie Ju-On (yes, it’s a reboot of a remake), the film is getting pummeled by critics so much that, statistically, Cats is a better movie.

The Grudge, directed by Nicolas Pesce and starring John Cho, Betty Gilpin, Demián Bichir, and Lin Shaye, retells the story of a vengeful spirit that inhabits a rural American home. Pesce previously told Entertainment Weekly the film takes place during the events of the 2004 movie, at the same time when Sarah Michelle Gellar’s character Karen is surviving the same curse in Tokyo.

Dumped in early January, a time when movies historically go to die, The Grudge currently stands at a rotten 17% with critics on Rotten Tomatoes. The audience score isn’t much better, with only 20% of RT users rating it favorably.

They may be completely different movies, but Tom Hooper’s star-studded acid trip Cats is just barely a “better” movie than The Grudge, with a 20% critic’s score (53% for audiences) on Rotten Tomatoes. It should be said that The Grudge is weighing 23 professional reviews while Cats is gauging from 265, but the averages are still very telling.

So, is The Grudge really that bad? Critics are describing it as a film “Nearly devoid of scares for the casual horror consumer” (The Hollywood Reporter) and succeeding only “at proving that the potential for this franchise died long ago.” (IndieWire)

This is a film at war with itself. Every time it starts to build up enough dread it kicks its own legs out by throwing out clunky dialogue … or adding a scene that has absolutely no weight or purpose … There’s plenty of grisly stuff here, and a lot of it is done practically, which might entice some gorehounds. But that can only go so far. Pesce’s The Eyes of My Mother has ten times less gore than this and still managed to be ten times as scary. Here’s hoping he gets back to making something like that, and soon.

In William Bibbiani’s one skull review for Bloody Disgusting, Bibbiani argues that the film isn’t even trying, writing:

The Grudge seems trapped in a solemn tomb of a motion picture, which plays out with all the grim determination of a funeral march. The jump scares are almost uniformly perfunctory and ineffective. The sense of dread we’re clearly supposed to feel, as the noose tightens and fate turns sour, was too heavily foreshadowed to mean anything in the end.

If critics or your fellow moviegoers with Rotten Tomatoes accounts aren’t enough to sway you, you can see The Grudge yourself as it’s playing in theaters now. Just remember: So is Cats, a film that NPR’s Christy Lemire says is “just baffling and yet it must be seen.” The choice is yours.

The Grudge, and Cats, are playing in theaters now.