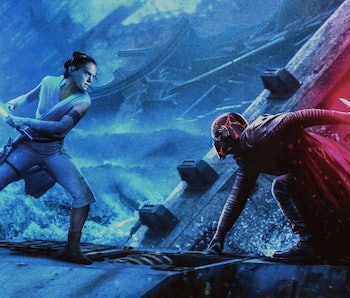 The more I think about Star Wars: The Rise of Skywalker the more questions I have. What was Palpatine’s actual plan? How did Maz Kanata get Luke Skywalker’s lightsaber? Why would the Sith Dagger work as a map if the Death Star crashed in an ocean and presumably shifted around a bit over the years?

Considering that Star Wars: Episode IX is being billed as the end of the saga, we may never learn the answer to these questions, but there are plenty of other Rise of Skywalker mysteries that could be explained when The Clone Wars Season 7 arrives on Disney+ this February.

The CGI animated series, which last aired in 2014 and takes place during the galactic war that rages in between Attack of the Clones and Revenge of the Sith, mostly serves to fill in various gaps of knowledge in Star Wars lore. Ever wonder how Force ghosts work? Or where the Force even comes from? Clone Wars has you covered.

So it seems safe to assume that The Clones Wars Season 7 could answer some key unanswered questions from The Rise of Skywalker. Here are seven pressing mysteries that could finally get solves in a little over a month from now.

Warning: Major spoilers ahead for The Rise of Skywalker.

7. How did Palpatine survive?

Let’s start with a big one. Rise of Skywalker doesn’t waste any time revealing that Palps is back, but beyond some vague theorizing from the Resistance (cloning? Sith magic?), we never get a concrete reason why. I’m not complaining, because Ian McDiarmid is one of the best parts of this movie, but some sort of explanation for how he survived that trip down the Death Star reactor would have been nice.

The Clones Wars Season 7 can answer that question easily by revealing whatever secret plans Palps was working on during the prequels. After all, we learn in Revenge of the Sith that he was already developing the Death Star, and he also entices Anakin with the promise of everlasting life in that same movie. So it’s not so ridiculous to think that Sheev Palpatine was planning his own resurrection at the same time.

After Rian Johnson unceremoniously killed of Snoke in The Last Jedi, J.J. Abrams’ solution was to reveal that the former Supreme Leader was actually just a creation of Emperor Palpatine all along! (He’s even got a vat full of additional back-up Snoke clones in his lair on the planet Exegol.)

Or, at least, that’s what we think happened.

The new Star Wars comic The Rise of Kylo Ren offers a different interpretation, introducing us to a younger and more passionate version of Snoke who lures Ben Solo over to the Dark side. This Snoke also claims that Luke gave him that gruesome forehead scar, which is pretty confusing since the Snoke clones in Rise of Skywalker have the same scar.

Will we ever get a definitive Snoke backstory? Probably not, but perhaps The Clone Wars Season 7 can set the record straight once and for all.

5. Who are the Knights of Ren?

After four years of hype, the Knights of Ren turned out to be a pretty huge letdown. The official Visual Dictionary for Rise of Skywalker reveals their individual names and cool, unique weapons, but in the actual movie all they do is arrest Chewbacca and then get killed by Kylo after he’s reverted back to being Ben Solo.

Kylo’s backstory comic is already doing a pretty good job of fleshing out the Knights and their fearsome leader Ren (who we’re pretty sure is different from Kylo/Ben Solo). But perhaps Clones Wars Season 7 can go even deeper.

Were the Knights of Ren around during the prequels? Maybe they were wrecking havoc in the outer rim or pulling off top-secret attacks for Palpatine. At the very least, a Clone Wars cameo could finally give us the epic Knights of Ren action scene we’ve been waiting on for years.

4. What are Wayfinders? And how are they different from Holocrons?

Before Rise of Skywalker’s release, we were pretty convinced that holocrons (basically encrypted messages that you need the Force to unlock) would play a huge role in the movie. Instead, we got Sith Wayfinders, a similar but brand new technology with a very confusing and spotty backstory.

Enter Clone Wars. The CGI series could easily retcon Wayfinders into prequels-era Star Wars. Maybe Supreme Chancellor Palpatine had one on his desk all along!

3. Who is Rey’s grandmother?

Look, it needs to be asked. If Emperor Palpatine had a son (who had Rey) then that means somebody in this galaxy far, far away had sex with Palps. A deep dive into the Star Wars Extended Universe reveals several likely contenders, but Rise of Skywalker never offers a decisive answer.

We’re still not sure if Palpatine did the deed during the prequels (when he was a relatively good-looking politician) or after he became Emperor (when he wielded total power but had a melted face). If it’s the former, Clone Wars Season 7 could easily show Palpatine and his lady friend who would eventually become grandmother to the most powerful Force-user in the galaxy.

2. Was Han Solo a Force ghost?

We’re pretty sure the answer to this one is no. When Han Solo shows up in Rise of Skywalker he’s not depicted with the blue glow that identifies Force ghosts. Kylo also calls him a “memory,” which doesn’t totally make sense, but whatever, we’re not gonna complain about more Harrison Ford.

Again, Clone Wars could clear things up. Season 6 of the show went into detail on how Force ghosts work and what it takes to become one. So it’s conceivable that Season 7 could add a wrinkle to this ability by revealing a way that non-Force-users like Han can tap into this specific ability.

1. What even are the Sith Eternal?

Rise of Skywalker does absolutely nothing to explain where Palpatine’s hooded minions came from or how exactly they’re involved in his evil plan. A quick look at the Star Wars wiki reveals that “the Sith Eternal was a secret cult that sought to resurrect the Galactic Empire and the Sith Order” and that they “oversaw the gradual rejuvenation of Darth Sidious.”

That’s a decent start, but there’s a saying in journalism that I think applies here too: “Show don’t tell.”

Where did the Sith Eternal come from? Do they have Force powers? What do they even look like under those hoods? If there’s any justice in the galaxy, The Clone Wars Season 7 will answer these questions — and a whole lot more.

The Clone Wars Season 7 premieres in February 2020 on Disney+.