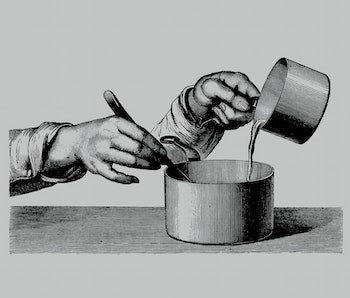 Like a nesting doll, all living things can be broken down into ever smaller parts. But what those smallest parts are made up of, and where they came from, is still unknown — meaning we don’t yet know how, exactly, life on our planet originated. The most-established theory posits that Earth’s first inhabitants arose from a primordial chemical soup — but the recipe is a hot topic of debate.

In July 2019, scientists announced that they may have deciphered at least part of the ingredients list.

For decades, researchers have sought to explain how molecules called peptides emerged on Earth. Peptides are made of smaller molecules called amino acids — without them, proteins and enzymes, the building blocks of life, can’t exist. In past attempts to recreate Earth’s early years, scientists have tried to generate peptides by putting amino acids into water. But it never worked.

Perhaps, peptides could arise in a different way. In this study, the scientists discovered that peptides don’t have to be built from amino acids. Instead, they can emerge from the building blocks of amino acids — compounds called aminonitriles — bypassing amino acids altogether. These compounds were probably abundant on the early Earth and can be synthesized easily from non-biological mechanisms, the study authors said.

They found that when these chemical precursors of amino acids are combined with hot hydrogen sulfide gas — the sort that wafts naturally out of volcanic cracks — and a bit of water, peptides spontaneously form.

Just a gentle mixture of gas, water, and aminonitriles makes for the “solvent of life,” co-author and University College London organic chemist Saidul Islam told Inverse at the time.

Still — there’s a big gap between the emergence of peptides and the emergence of life as we know it. The reactions and interactions that came next, and what caused those to happen, are still a mystery.

Other scientists argue that the chemical origins of life are so obscure because early Earthlings got a boost from an alien source — meteorites transporting space sugars. This theory argues that life didn’t need to completely emerge spontaneously, because building blocks from space were literally crashing into the young planet.

As 2019 draws to a close, Inverse is revisiting the year’s 20 wildest space stories. Some are awe-inspiring, some are bordering on science fiction, and some are just, well, wild. This has been #4. Read the original story here.