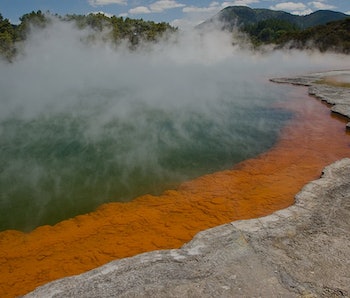 In the beginning, there was soup. One leading explanation for how life arose on Earth is that simple chemicals in water, a primordial “soup,” formed in the hot, tumultuous early world and spontaneously came together to create the building blocks of life, in time creating molecules like RNA and DNA and, eventually, complex life forms like humans.

The roughly 4-billion-year-old recipe had eluded scientists for decades, but on Wednesday, the authors of a Nature paper announced a breakthrough.

For a long time, scientists could not explain the spontaneous formation of one critical building block known as a peptide, which proteins and enzymes can’t exist without. “They are essential to all life on Earth,” co-author and University College London organic chemistry reader Matthew Powner, Ph.D., tells Inverse.

Peptides are known to be made up of smaller molecules called amino acids. But for over 60 years, researchers who threw amino acids into water under the right conditions and waited for peptides to form just couldn’t make it work. If they couldn’t do it, how could the reaction have happened randomly in the primordial ooze?

“Many before us have concentrated on trying to join amino acids together to make peptides, but these reactions aren’t very good,” co-author and fellow UCL chemist, Saidul Islam, Ph.D., tells Inverse.

But together with first author Pierre Canavelli, Ph.D., the team landed on a formula, offering us a glimpse into a process that might have helped give rise to life on Earth millions of years ago.

How Peptides Formed on the Early Earth

All life can be broken down into smaller and smaller parts. Humans are just big bags of cells, cells are bags of proteins, proteins are made up of peptides, and so on. The team’s “key observation,” as Islam puts it, was that their elusive peptides didn’t have to be built from amino acids themselves but the building blocks of the amino acids.

Those precursors are called aminonitriles and were probably abundant on the early Earth, says Powner, adding that it’s “very clear” they can be synthesized easily from non-biological mechanisms. Those molecules, combined with the hot, eggy hydrogen sulfide gas that wafts naturally out of volcanic cracks, even today, created the perfect conditions for peptides to spontaneously form.

“We took a step back, figuratively and literally, and hypothesized that the chemical precursors of amino acids could react selectively in water to yield peptides,” explains Powner.

The precursors were enough. Floating around in water, as they might have been at the beginning of life on Earth, they went through what Islam calls “gentle” interactions with the volcanic gas to form the elusive peptides, bypassing amino acids completely. Gentleness suggests ease. There was no need for some strong catalyst or external force to coax these molecules together. Just gas, aminonitriles, and water, which Islam calls the “solvent of life.”

This, says Powner, is a “significant change of perspective that presents a simpler solution to peptide synthesis.”

How Did Peptides Lead to Life?

Powner says this finding helps solve the “classic chicken-and-the-egg problem” that haunts scientists studying the origin of life. The peptides that form proteins are formed today with the guidance of other proteins, but that couldn’t have been the case at the beginning of life. “If you need proteins to make proteins,” he asks, “what made the first protein?”

"If you need proteins to make proteins, what made the first protein?”

The simple answer is that the first proteins arose spontaneously — chemistry preceded biology — and that’s exactly what the team showed by demonstrating how peptides can form from aminonitriles.

That said, there’s a big, unexplained gap between peptides and the emergence of actual life. As Islam says, “it’s all very well making these peptides, but at some point, they had to do something.”

He imagines they might have developed the ability to catalyze important reactions or act as a “chaperone” for primitive life to develop and evolve. In explaining the origin of life, there is a long way to go, but Islam says “We are very excited about this prospect and think we’re close to observing function in short peptides.”

The formation of peptides at the cusp of life is one important problem of many in the attempt to explain our beginnings. The “emergence of life,” Powner points out, “is a very complex set of problems, not a single problem.”

Nevertheless, the team’s discovery left him feeling “satisfied,” he says, because for years he and Islam had worked with aminonitriles and had been frustrated by chemistry that just didn’t seem to make sense. Aminonitriles lose a lot of their inherent energy when they come together to form amino acids, but that energy is needed when the amino acids try to form a peptide. Now they know that the energy-wasting step could have been skipped.

“My immediate thoughts were ‘this is all starting to make sense now’ in the broader picture of the origins of life puzzle,” says Islam. Encouraged by their work, the team is now looking for other ways that peptides might have formed from aminonitriles. The more evidence they find, says Islam, the better they can support their solution to the chicken-and-egg problem Powner described.

But this is the primordial Earth we’re talking about, a place we can only begin to imagine using the data we collect today. “It’s important,” says Islam, “not to rule anything out.”

Amide bond formation is one of the most important reactions in both chemistry and biology1,2,3,4, but there is currently no chemical method of achieving α-peptide ligation in water that tolerates all of the 20 proteinogenic amino acids at the peptide ligation site. The universal genetic code establishes that the biological role of peptides predates life’s last universal common ancestor and that peptides played an essential part in the origins of life5,6,7,8,9. The essential role of sulfur in the citric acid cycle, non-ribosomal peptide synthesis and polyketide biosynthesis point towards thioester-dependent peptide ligations preceding RNA-dependent protein synthesis during the evolution of life5,9,10,11,12,13. However, a robust mechanism for aminoacyl thioester formation has not been demonstrated13. Here we report a chemoselective, high-yielding α-aminonitrile ligation that exploits only prebiotically plausible molecules—hydrogen sulfide, thioacetate12,14 and ferricyanide12,14,15,16,17 or cyanoacetylene8,14—to yield α-peptides in water. The ligation is extremely selective for α-aminonitrile coupling and tolerates all of the 20 proteinogenic amino acid residues. Two essential features enable peptide ligation in water: the reactivity and pKaH of α-aminonitriles makes them compatible with ligation at neutral pH and N-acylation stabilizes the peptide product and activates the peptide precursor to (biomimetic) N-to-C peptide ligation. Our model unites prebiotic aminonitrile synthesis and biological α-peptides, suggesting that short N-acyl peptide nitriles were plausible substrates during early evolution.