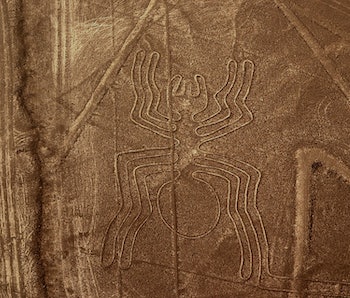 Earth’s most astounding group of geoglyphs stretch across nearly 200 square miles of arid Peruvian coastal plain. The Nazca lines are a huge mystery — literally. A portion of the 70 animal and plant designs are as large as the Empire State Building. But it’s unclear what story they are supposed to tell.

However, this summer scientists became one step closer to understanding the purpose of the Nazca lines by taking an ornithological approach. By carefully evaluating the traits of the bird geoglyphys they were able to determine what species of birds were represented — and hypothesize why those birds were there in the first place.

This is #2 on Inverse’s 20 most incredible stories about our planet from 2019.

Their analysis was published in the August 2019 edition of the Journal of Archeological Science: Reports.

While called the “Nazca lines” the site is actually a patchwork quilt of straight lines, geometric figures, fantastical creatures, as well as realistic animal and plant designs. The latter group includes 16 etchings of massive birds. These figures were etched out between 500 B.C. to 500 A.D. by an unknown pre-Incan people.

In this study, a team of Japanese researchers examined the morphological traits of the birds, including their giant beaks, necks, wings and tails. They subsequently compared those observations to more than 2,000 scientific drawings of Peruvian birds.

This process allowed them to confidently classify three of the 16 birds: the pelican, the guano bird, and a hermit. The hermit was previously and popularly known as the “hummingbird.” Hermits, meanwhile, are tropical and subtropical hummingbirds. In Peru, there are two types — the Koepecke’s hermit and the Reddish hermit.

Importantly, each of these birds are regionally exotic: Hermits and the guano bird are found in tropical rain forests, while pelicans live in coastal areas. This means that the Nazca lines were not intended to entirely represent birds local to the area.

It could be that the Nazca people saw these birds prior to coming to the site, possibly on food-gathering trips, then represented what they saw in the high desert. Previously, it’s been hypothesized that the lines exist because they had ritual astronomical functions. Now the idea is that they could have instead existed to lead the way to where water and food was once obtained — a permanent way to remember what different parts of Peru have to offer.

As 2019 draws to a close, Inverse is revisiting the year’s 20 most incredible stories about our planet. Some are gross, some are fascinating, and others are truly incredible. This has been #2. Read the original article here.