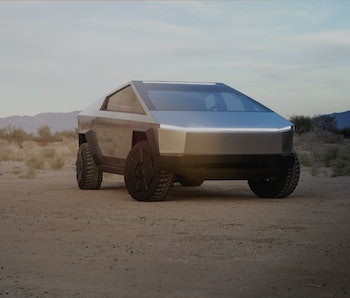 When it debuted, the Cybertruck looked like nothing else. Now that Tesla’s design has been seen around the world, it’s receiving one of the highest compliments: knock-offs. A Russian Twitter account spotted an off-brand Cybertruck, first spotted by Jalopnik driving on the streets of Moscow, and wanted to make sure Tesla CEO Elon Musk knew about it.

“How do you like it @elonmusk ? Tesla has not yet started selling Cybertruck, but in Moscow they have already assembled theirs,” reads a translation of the tweet from @WildWildMoscow, a Twitter feed dedicated to capturing both light-hearted and political moments from Russia’s capital city, where 11.92 million people live. There’s no indication of who owns the faux-Cybertruck, if they’re even in Moscow, or who filmed the initial footage, which appears to be grabbed from dashboard camera, which are ubiquitous in Russia.

It’s equally hard to say how this fake Cybertruck (Lie-bertruck?) was built. Guesses in the comments include gluing pieces of plywood on top of a regular vehicle of some sort. However they’ve done it, they’ve created a pretty facsimile: it looks seamless from the outside, just like the real Cybertruck.

There are few telltale signs that this isn’t some Tesla employee gone rogue: The angle of the back rises at too high an angle, compared to the real deal. The light bar on the back lacks the full sophistication of the The Cybertruck’s back also has the option to come loaded with solar panels, offering more milage, and nary a panel appears on this Russian highway.

The Cybertruck, which Tesla says will begin production in late 2021, created a splash with its unique design. On the whole, it seems Americans have not caught Cybertruck fever. A recent poll from consumer insight pollster Piplsay showed that 45 percent of Americans were “not impressed” with the truck’s design, with some calling it “a rich boys’ toy” and others wanting a focus on more affordable electric vehicles. Forty-six percent of Americans, however, would be interested in the Cybertruck if the design was different.

The truck’s design is a sharp turn from traditional truck designs, seen in vehicles like Ford’s F-150. The discussion over the vehicle’s design veered into the philosophical, with some wondering if it could accurately fit into the architectural style known as brutalism.

After the Cybertruck unveiling in Los Angeles, Musk commented on Twitter that the truck’s angular design was a necessity due to the materials being used. “Reason Cybertruck is so planar is that you can’t stamp ultra-hard 30X steel, because it breaks the stamping press. Even bending it requires a deep score on inside of bend, which is how the prototype was made.”

It’s highly unlikely that the Russian Cybertruck was made out of similar materials, which another of Musk’s companies, SpaceX, is using to build another product not yet on the market, the Starship, which got a shiny new redesign in July 2019. But a DIY Cybertruck shows that there’s some genuine enthusiasm for the truck, at least from one person in Russia.