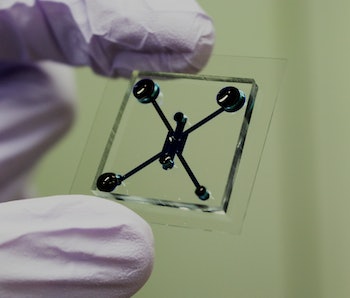 Scientists have designed a mini, tumor-on-a-chip that they hope can help improve cancer drug development.

In 2018 the World Health Organization reported that 9.6 million people died from cancer that year alone. This number might seem staggering given all the money and time being poured into cancer drug development, but in reality, only a few of those drugs are making it to patients. Many others, as much 43 percent, will instead fail during their test trials, in part due to poor model design.

A study published in the January 2020 edition of the journal Biomaterials, scientists have designed a chip model that more accurately mimics a biological vascular system in order to determine how blood flow actually affects drug delivery to the tumor.

The study’s first author, Yuji Nashimoto, said in a statement that they hope this approach can solve some of the problems presented by current drug development models that poorly mimic certain important aspects of human biology, such as vascular systems.

“Potential compounds are tested using animal models and cells cultured in a dish. However, those results frequently do not transfer over to human biology,” said Nashimoto. “Furthermore, cells on a dish lack the three-dimensional structure and blood vessels, or vasculature, that keep it alive. So, we came up with a plan to construct a device that solves these issues.”

To achieve this goal, the team designed a tumor-on-a-chip the size of a coin that contains a 1 millimeter well at its center and a series of 100 micrometer-sized microposts at the edges. They then placed a culture of tumor cells in the center and cell cultures designed to construct blood vessels at the microposts. Over the course of a few days the blood vessels grew to connect with the tumor cells at the center. Once that vascular framework was in place, the team was able to test how it would react to drug administration.

The authors note in the study that they’re not the first to design a vascular structure on a chip like this, but say they are the first to do so in order to access drug delivery.

“This ‘perfusable vasculature’ allows us to administer nutrients and drugs into the system to mimic the environment in the body,” said Nashimoto. “This allows us to have a clearer picture of the effectiveness of cancer treating compounds.”

After administering different dose strengths of the anti-cancer drug paclitaxel to the chip, the team observed that the vascular system remained intact and with continuous flow over a 48 hour period, meaning that drug delivery to the tumor could be confirmed.

The team also observed that drug delivery was more effective during static conditions when nutrients and oxygen through the vascular system were not flowing than during active nutrient flow. This was a surprising, but important finding because it suggests that typical chip models — which are inherently static — may not be truly replicating how a cancer drug would behave once given to a patient. In other words, the success of the drug might be overinflated due to the static nature of the model.

Through additional trials, the team found that higher doses of the drugs were more effective under a continuous flow scenario.

“We hypothesize that at low doses the benefit of the nutrient flow outweighs the effect of the anti-tumor drug,” said the study’s lead researcher, Ryuji Yokokawa, in a statement. “It proves the importance of blood flow in the vasculature when screening for drugs.”

Going forward the researchers say it will be important to look more closely at how something like the flow-rate at which the drug was administered might change its efficacy. And ultimately, the team hopes their small device can help improve the drug development and testing process.

“Due to its size and utility, we hope the new device can expedite the tests on the countless number of potential new drugs,” said Yokokawa. “While many questions remain, we are happy to have developed this device and have shown that three-dimensional perfused cell culture is vital for the next step in drug discovery.”

Tumor vasculature creates a hostile tumor microenvironment (TME) in vivo and nourishes cancers, resulting in cancer progression and drug resistance. To mimic the biochemical and biomechanical environments of tumors in vitro, several models integrated with a vascular network have been reported. However, the tumor responses to biochemical and biomechanical stimuli were evaluated under static conditions and failed to incorporate the effects of blood flow to tumors. In this study, we present a tumor-on-a-chip platform that enables the evaluation of tumor activities with intraluminal flow in an engineered tumor vascular network. The fibroblasts in the tumor spheroid induced angiogenic sprouts, which constructed a perfusable vascular network in a tumor spheroid. The perfusability of the engineered vascular network was preserved during the culture. Moreover, perfusion for over 24 h significantly increased the proliferation activities of tumor cells and decreased cell death in the spheroid. Drug administration under perfusion condition did not show the dose-dependent effects of anticancer drugs on tumor activities in contrast to the results under static conditions. Our results demonstrate the importance of flow in a vascular network for the evaluation of tumor activities in a drug screening platform.

More like this
Science
Jan. 22, 2023
New mRNA cancer vaccine has a key difference from most jabs
By Mark R. O'Brian and The Conversation
Mind and Body
Feb. 1, 2023
Why the future of periods could be none at all
By Elana Spivack
Science
Jan. 22, 2023
Infection expert answers 7 top questions about Covid-19’s “Kraken” subvariant
By The Conversation and Sameer Elsayed
LEARN SOMETHING NEW EVERY DAY.
Related Tags
Share: