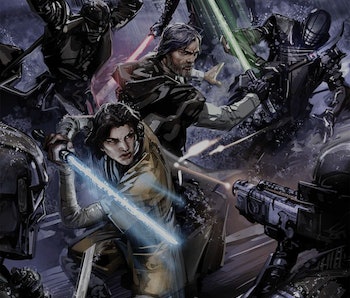 The Knights of Ren have been a mystery since their introduction in The Force Awakens. While they’re meant to play a larger role in Star Wars: The Rise of Skywalker, how they’ll factor into the story remains to be seen. Are they working with Emperor Palpatine? Why do they chase C-3PO and Zorri Bliss in Episode IX? Though fans have long assumed they were loyal to Kylo Ren, new details about the helmeted fighters may change how we think about the Force altogether.

Mild spoilers ahead for Star Wars: The Rise of Skywalker.

Director J.J. Abrams revealed that the Knights of Ren had a backstory that never made it into The Force Awakens, which is why they were brought back for The Rise of Skywalker. That’s partly why it came as a surprise when the canonical comic book Star Wars: The Rise of Kylo Ren confirmed that they’re Force users. In an interview with StarWars.com, comic writer Charles Soule explained the Knights of Ren and the extent of their Force powers.

“They can all use the Force, the Dark side of the Force, to varying degrees. They’re not as powerful as a Jedi or a Sith, but they use it when they fight…. They have some sort of a code, like a motorcycle gang, but it’s not elaborate. They’re flexible.”

This new information changes everything we thought we knew about them. Previously, fans speculated that they, like Ben Solo, were former students of Luke’s Jedi school. However, this comic seems to say that wasn’t the case. In fact, it seems to discount the idea that they were students at all.

But, how can the Knights of Ren be Force users if they’re neither Jedi or Sith? One theory posited that they’re involved with Crimson Dawn, a crime syndicate helmed by Darth Maul. That could explain why they can use the Force.

However, Lucasfilm boss Kathleen Kennedy recently explained to io9 that the Force is the “foundation” of Star Wars and it implied that the Force is not bound to any one group, as seen in The Last Jedi scene of the seemingly random boy who uses the Force to move a broom.

As the foundation of the universe, the Force will not only play a big role in Episode IX, but in all future stories. And if all goes as planned, the idea that the Force isn’t exclusive to any one faction — as the Knights of Ren have proven — might pave the way for others beyond the Jedi and Sith to explore its powers.