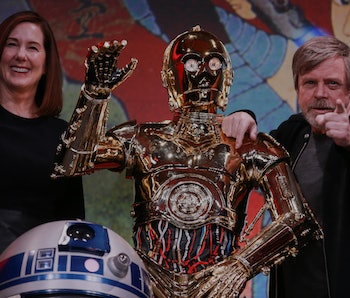 How the Knights of Ren factor into Star Wars: The Rise of Skywalker is anyone’s guess at this point. Fans have wondered whether they reported directly to Kylo Ren, served Palpatine, or were working with Darth Vader. Now, a new book from Anthony Daniels, I Am C-3PO – The Inside Story, reveals an intriguing new detail about what the Knights of Ren will be up to in The Rise of Skywalker.

Warning! Mild spoilers ahead for Star Wars: The Rise of Skywalker.

Daniels is the only Star Wars actor who’s been around since the beginning. He played the beloved droid C-3PO in A New Hope for the first time in 1977, and his character has been a comforting presence throughout all of the mainline Star Wars films so far.

So, what does C-3PO have to do with the Knights of Ren? Well, over on Reddit, user readytokno shared a new tidbit from Daniels’ book about a scene involving the bumbling droid, Keri Russell’s Zorri Bliss, and the Knights of Ren.

“During a scene where the team flees from the Knights of Ren down narrow cobbled streets, he bonded with Keri Russell over having uncomfy costumes,” writes the redditor, paraphrasing Daniels’ words from the section about Episode IX.

This seems to imply that C-3PO is working with Zorri and they’re both being hunted by the Knights of Ren. Though the description leaves out the planet they’re on, it’s possible the Knights of Ren followed Zorri and Threepio to Kijimi, the cold, mountainous planet known as the Thieves’ Quarter. Perhaps the knights have been tasked with finding the droid to extract whatever information remains on his motherboard.

If you recall, C-3PO’s memories had been wiped at the end of Revenge of the Sith. A recent fan theory speculated that a disc Zorri’s holds in some promotional photos for the film seemed to match up with Threepio’s head. The theory went on to say that Zorri was attempting to deliver the disc to the Resistance. Daniels’ book seems to confirm that she’s not out to harm the protocol droid. The Knights of Ren are another story.

If nothing else, it seems The Rise of Skywalker is finally giving the Knights of Ren something to do besides look tough in flashbacks. Did they come out of hiding to fight alongside Kylo? If they’re after the disc in Zorri’s posession, it’s possible that they’re trying to track it and bring it back to the Supreme Leader for diabolical reasons.

Of course, it’s also possible that the Knights of Ren are on Kijimi for another reason, but detoured to go after Zorri and 3PO knowing they are in league with the Resistance. Still, my money is on the them targeting Zorri and C-3PO because of that pesky motherboard. Whatever the reason for their chase, the Knights of Ren are finally stepping up to the plate. It’s about time.