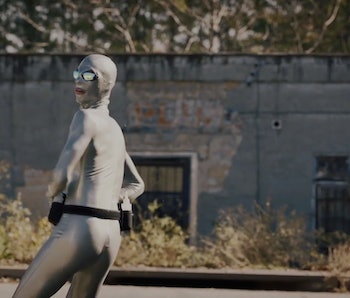 The newest masked vigilante in the Watchmen universe that you may have forgotten about could slide his way back into the mix for the series finale. Now’s the perfect time to contemplate the secret identity of Lube Man — or whatever you call the creepy, lanky man that slid right into a sewer using a glistening metallic onesy and some kind of lubricant in Episode 4. Lucky for us, the latest entry on HBO’s Peteypedia database drops even more hints that Lube Man is none other than our lanky friend Agent Dale Petey

When Episode 4 first aired, many viewers theorized that this was probably Petey (Agent Blake’s nerdy sidekick from the FBI) based on his overall build and his noted worship of masked heroes.

He even brings a superhero-style eye mask on assignment to Tusla. So it’d be surprising for Petey to not have some kind of masked persona, right? We’ve still yet to learn anything more about the lubed up Silver Slider since his slick debut, but will we get any answers in the finale?

Let’s recap the initial evidence: Laurie Blake somehow figured out that Angela Abar was covering up the existence of her grandfather, Will Reeves, and how he (essentially) murdered Judd Crawford. Lube Man was watching Sister Night as she dumped the pieces of Will’s wheelchair onto a garbage truck, and he escaped with that knowledge — knowledge that Agent Blake later used to accuse Angela in a conversation where Agent Petey squeezed through a partially open door.

In the new Peteypedia memo published after the season’s penultimate episode, Agent Petey discusses his fascination with Fogdancing, a novel written by Max Shea within this universe about Howard McNulty and the other Fogdancers who committed secret atrocities on behalf of the United States government during the war with Vietnam. Petey goes on to recount how the novel inspired most of the masked vigilantes we know of, including Ozymandias and Mothman. (Adrian Veidt is reading this in his cell at the end of Episode 8.) Copies of the novel were also found in the homes of Rorshach and the Comedian. Even Doctor Manhattan was known to quote it from time to time.

In a 2005 Fogdancing recap contest, Petey’s submission (what a total nerd!) took last place and he refers to his humiliation at this as his “origin story.” In that recap, however, Petey writes of “skin-tight silver suit shimmering with SPF-666,” a gel that prevents burns — and maybe lubricates to an extreme extent? It becomes clear that Fogdancing also inspired Lube Man.

Agent Petey’s latest memo also notes the disappearance of Agent Blake, who at this point has been missing for 36 hours. So doesn’t it seem likely that he might suit up and slip into the lair of the Seventh Cavalry? Maybe a silvery man team-up is in order with Looking Glass, who has also been MIA for a few episodes? Watchmen won’t end without some kind of answers about Lube Man, right?

More like this
Entertainment
8.4.2022 4:14 PM
53 sci-fi and DC shows and movies on HBO Max you need to watch ASAP
By Jake Kleinman, Eric Francisco and Ryan Britt
Entertainment
7.31.2022 12:00 PM
'House of the Dragon' will obliterate one annoying 'Game of Thrones' rule
By Alex Welch
Entertainment
8.6.2022 10:30 AM
Eternals 2 leak may confirm one major MCU Phase 6 theory
By Alex Welch
Share: