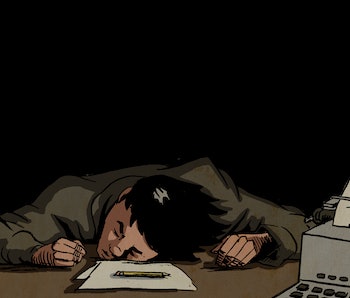 Light, especially the blue light given off by smartphone screens, is sleep’s nemesis. But in September 2019, scientists unveiled a new treatment that could turn light into sleep’s ally. This futuristic flashing light therapy could be the unlikely salve the sleep deprived have been searching for.

A flashing “beacon” of light could actually help teens get as much as 43.3 more sleep minutes per night, according to a clinical trial of the therapy.

This is #19 on Inverse’s list of 25 striking lessons from 2019 for humans to help maximize our potential.

The trial included 102 teenagers who received both cognitive behavioral therapy and the experimental treatment. When the teens received both CBT and were exposed to 3 milliseconds of a flashing light every 20 minutes during the last three hours of sleep, their sleep schedules changed — on average, they slept for more than 40 minutes longer than they did at the start of the trial.

The trial results were published in September 2019 in JAMA Network Open.

Lead study author Jamie Zeitzer told Inverse at the time that the treatment works because it helps teens readjust their circadian rhythms — a 24 hour cycle of hormone release that governs when you feel tired or hungry, as well as other bodily processes.

Typically, teenagers experience a “sleep phase delay” in their circadian rhythms, which means that they often don’t feel tired until later in the evening, around 11 p.m. For some teens, school starts around 7:30 a.m. — that means teens often fall short of the roughly nine hours of sleep they need.

Teens who received the light therapy went to bed 27.5 minutes earlier on average compared to teens who did not.

Light therapy on its own may not be enough to change body clocks. Sleep time increased significantly only when the treatment was combined with regular cognitive behavioral therapy. In these sessions, teens talked about keeping a healthy sleep schedule or getting up slightly earlier on weekends. Teens who received CBT alone were seven times less likely to stick to their therapists advice or keep a more regular sleep schedule — suggesting the two therapies work in tandem to produce the desired effect.

The flashing light device used in the trial doesn’t exist outside of the lab yet. But the results suggest that flashing light treatments could be a futuristic way to tackle our persistent sleep issues. Learn more about its potential here.

As 2019 draws to a close, Inverse is revisiting 25 striking lessons for humans to help maximize our potential. This is #19. Some are awe-inspiring, some offer practical tips, and some give a glimpse of the future. Read the original article here.

More like this
Mind and Body
Oct. 3, 2022
Having this many nightmares a week may be tied to extreme brain aging
By Abidemi Otaiku and The Conversation
Mind and Body
Sep. 26, 2022
Why you shouldn't sleep in on the weekend (sorry)
By Katie MacBride
Mind and Body
9 hours ago
An antidote to heartbreak? Science reveals how to hack loneliness
By Ali Pattillo
Related Tags
Share: